The twentieth century can safely be seen as the century where women have shown their mettle. There is no field left, where women have not proved their worth. The same is the case when it comes to the field of arts. The century is rife with examples of female artists, feminists, and otherwise. Artsome lists a few famous female painters of the 20th century who dared to challenge the mainstream representation of women in the art world and provided alternate ways of viewing them. These stunning images will leave you both intrigued and dazzled.

Paula Modersohn-Becker (1876 –1907) was a German painter and one of the most important representatives of early expressionism. In a brief career tragically cut short at the young age of 31, she created several groundbreaking images of great intensity. She is recognized as the first female artist to paint female nudes. This image is an example of using a bold subject matter and chromatic colour choice to present a dynamic work of art.

Amrita Sher-Gil (1913 – 1941), was an eminent Indian painter born to a Punjabi father and a Jewish mother. Recognized among the famous female painters, she is sometimes referred to as India’s Frida Kahlo, an artist par excellence, and considered an iconoclastic female painter of 20th century India. The images she made were about the complexities of life- she was of mixed parentage and her art school background in Paris made her both, an insider and outsider, as did her ambivalent sexuality- which promoted her to constantly reinvent her visual language. This image seeks to reconcile her modern sensibility with her upbeat resonance to traditional art-historical resources.

Frida Kahlo (1907-1954) is one of the famous female painters of the 20th century. She took an active part in the feminist movement. The style she innovated and experimented in is known as Surrealism. Her beliefs were inspired by Marxist thought, and at the heart of it, there was a belief in the connectedness of all human experience. The most radical part of her work is the collection of self-portraits, where she paints herself in various adventurous poses. This particular self-portrait is an agonized attempt to be a Mexican Saint Sebastian; Frida displays her wounds and demands that we confront her miraculous survival. Like many Saint Sebastian paintings, The Broken Column combines the sexual attraction of a well-formed nude with physical mortification to convey the message of spiritual triumph.

Sandy Orgel is a famous female painter who became famous for having to be part of the Womanhouse project (30 January – 28 February 1972) which was a feminist art installation space. The project was organized by Judy Chicago and Miriam Schapiro, who were co-founders of the California Institute of the Arts Feminist Art Program. This work by her – Linen Closet – presents a mannequin in a woman’s shape, which is carved out and placed in between the shelves of a closet. This is no ordinary closet, but a linen closet. Being a female artist, she has depicted a disturbing scenario; a domestic woman’s who is forced to remain between shelves, as a shadowy, insubstantial creature. 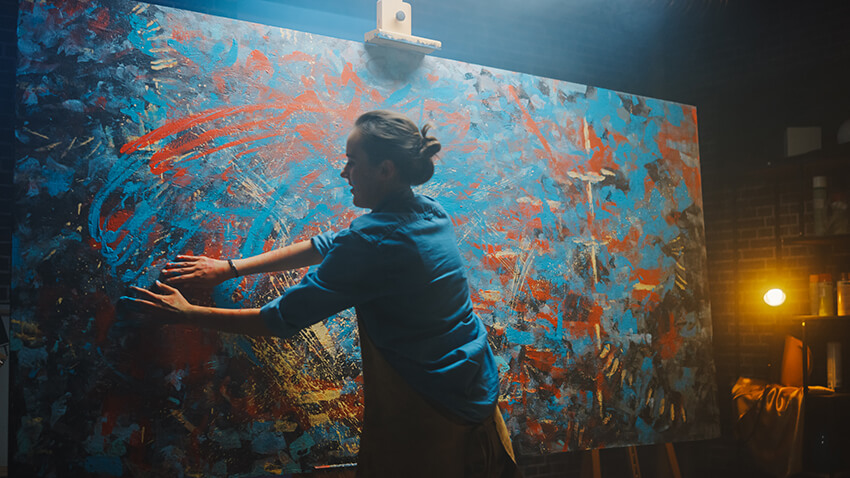 An anonymous group of feminists, female artists devoted to fighting sexism and racism within the art world. The group formed in New York City in 1985 with a clear mandate of bringing gender inequality within the fine arts and highlight the plight of female painters. Members are known for the gorilla masks, which they wear to remain anonymous, and which are a vital part of the ideology. These prevent the girls from being recognized by their faces, which is a patriarchal instrument, something that is a marker of prejudice and stereotypes. These posters exemplify the strategy of using humour to break down discrimination and prejudice within the art world. Adopting a tongue-in-cheek tone, this is a take on prejudices faced by woman artist as late as the late 1980s. Guerilla Girl Lee Krasner stated, “The world of High Art, the kind that gets into museums and history books, is run by a very small group of people. Our posters have proved over and over again that these people, no matter how smart or good-intentioned, have been biased against women and artists of colour.”

Though we have listed only 5 famous female painters here, the fact is that female painters of the 20th century have brought a revolution in the world of arts with their creativity and clear thinking. These female artists have shown the world another view of the world, a view from the female’s eye.