A Brief History of Landscape Painting

The word landscape is derived from the Dutch word, landschap, which means ‘region, a tract of land’; however, it only entered art parlance in the context of depicting the scenery of land in the early 1500s. In fact, before the 16th century, during Greek and Roman times, landscapes were not particularly the subject of paintings except for wall paintings These landscape paintings mostly functioned as settings for human activity with the works having historical or religious currency in works like Leonardo da Vinci’s The Annunciation, Giovanni Bellini’s St Francis in Ecstasy, Sandro Botticelli’s Birth of Venus and Caravaggio’s Rest on the Flight into Egypt.

The Netherlands has the unique credit for the origin of the word as well as for the origin of landscape painting. This was one of the first places where landscape paintings became a popular subject for painting. The history of landscape paintings has been deeply affected by the political changes occurring in the country. When Northern Netherlands gained independence from Spain, the populace rejected Catholic art-works interlinked to Spanish rule and the artists instead chose to depict the Dutch republic’s flat, familiar landscapes as an assertion of national identity and pride. Artists like Albrecht Durer and Pieter Bruegel the Elder made landscapes paintings more independently as in Bruegel’s Hunters in the Snow.

However, landscape paintings came into their own only in the seventeenth century with the rise of Dutch and Flemish schools with painters like Jan Vermeer and Ruebens. French artists Nicolas Poussin and Claude Lorraine also popularized the genre. Humans continue to crowd landscape paintings, but now the purpose is not to depict human activity but to indicate scale and enormity of nature and landscape and evoke viewer empathy.

The English sought to illustrate an ideal landscape, specifically referring to Arcadia, a legendary place in ancient Greece known for its pastoral beauty. A classical landscape featured a conscious, stylized positioning of objects to present an idealized, harmonious mood, where Nature was in balance and serenity. Beauty in order and harmony was the adage, so that landscape gardening and ordered houses came to define upper-class lifestyle and manners.

Landscape paintings were acknowledged for their own sake due to their significance in documenting nature as an educational study. While Italy remained a favourite source of inspiration for the landscape artist in the century, France and England became the new centres of landscape art, although the ideals of 17th-century Dutch and Italian landscapes—including the classical model—were still popular. Post-French Revolution and the Napoleonic Wars period was when some of the greatest landscapes were produced. Artists like John Constable and Turner romanticized the countryside and landscape, their scenes more dramatic and nostalgic. Caspar David Friedrich infused his landscape paintings with religious symbolism but what was common to all these artists was the sublime feeling of awe that man felt amidst the expansive Nature, which is both generous and dangerous. 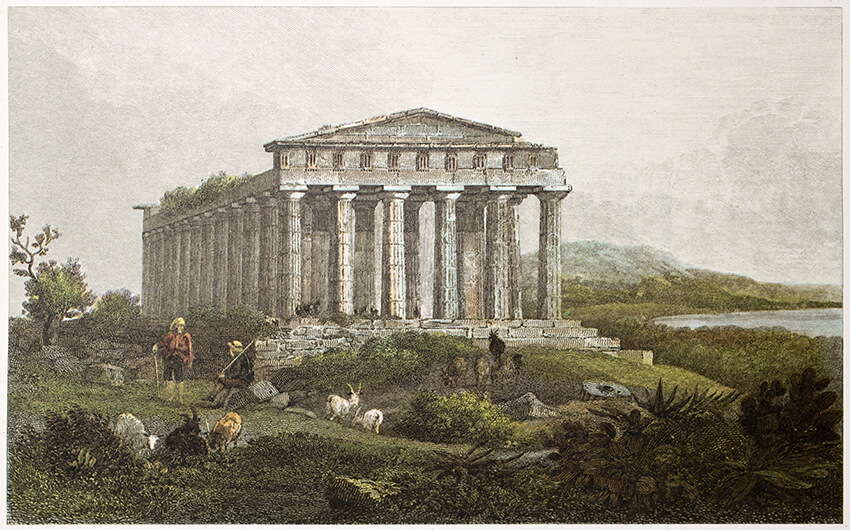 The late 18th century saw Pierre-Henri de Valenciennes creating a new destiny for landscape paintings in France; he worked hard to convince the Royal Academy to see the landscape painting as worthy of a history painting.

There was a transition observed from moving to idealized, classical paintings to painting out of doors directly from nature, known as Plein air painting, which led to the development of Impressionism. Even Turner’s later works are highly impressionistic as they play with colour and light. Claude Monet radically pushed the envelope, re-defining and re-presenting landscape painting, leading the way for the next generation of painters, the Impressionists, who would completely shatter conventions of realism and naturalism through their work. The Impressionists, which included Claude Monet, Camille Pissarro, Auguste Renoir, and Alfred Sisley mostly worked out of doors, producing iconic landscapes wrought in their characteristic style.

The 19th century also witnessed the emergence of landscape photography, which greatly impacted the painters’ compositional perspectives; they shifted away from realistic, faithful interpretations of the landscape and instead imbued the works with their interpretations.

Landscape paintings were also extremely popular with the artists of the post-impressionism era. Some of the compositions include Whistler’s Nocturne in Blue and Silver: Chelsea, Paul Cezanne’s Lac d’Annecy, Van Gogh’s Wheatfield with Crows, and Seurat’s Bathers at Asnieres.

In the 20th century, the landscape paintings continued to hold sway although it appeared in various avatars such as urban landscapes, cultural landscapes, industrial landscapes, and landscape architecture. Twentieth art century movements which incorporated landscapes included Photorealism and Precisionism focused on urban landscapes with industrial buildings. Precisionism inspired by Futurism and Cubism was rooted in the machine age. Human figures rarely appear in these works commenting on the dehumanization and conflict in the industrialized metropolis or the barren countryside. Precisionist painters include Charles Sheeler, Charles Demuth and Georgia O’Keefe. A few Fauvist and Cubist artists too dabbled in landscape paintings but this experimentation ended soon. Artists like Maurice de Vlaminck, Andre Derain, and Albert Marquet are some of these fauvists.

Landscape painting like all genres of art became completely chaotic and disjointed after the Second World War as new movements like Minimalism, Pop-Art, Kitsch and Neo-Dada changed and came to define the aesthetics of a world in complete chaos and economic and psychological depression. Artists like David Hockney painted scenes from his car.

To comment on the state of landscape painting in the 21st century is difficult but it is interesting to wonder what more can the artists innovate in a genre, how else they can change the mode of representation, and influence the aesthetics of an era. If Charles Fazzino’s fun, colourful, apolitical aesthetics will define the genre we are yet to find out. What do you think?