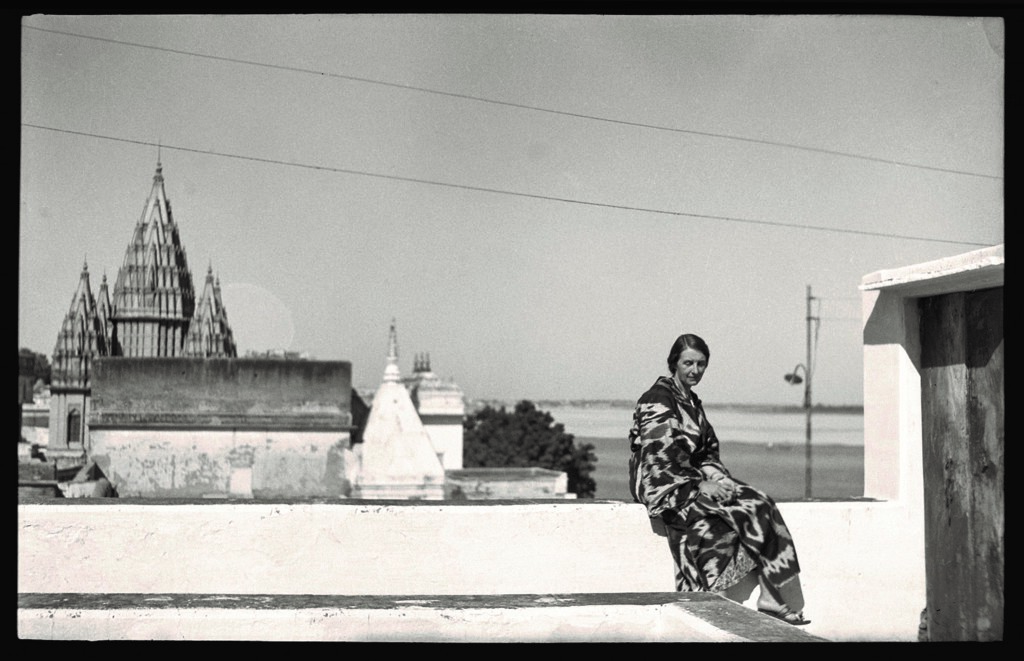 Alice Boner on the terrace of her house in Assi Ghat, Benaras

The National Museum, New Delhi, India, in collaboration with Museum Rietberg, Zurich and the Alice Boner institute, Varanasi has organized an exhibition on the life, journey, artistic works and research of the artist Alice Boner from Switzerland. Although she spent nearly 40 years in India promoting many Indian artists and acting as a cultural Ambassador between the East and West, not much has been done to promote her works. So, it is laudable that an exhibition showcasing her early life in Europe, her meeting of the dancer Uday Shankar, her travels through India and her life in Varanasi has been organized through photographs, texts, and art works of Alice Boner nearly 35 years after her passing away. The exhibition was opened to the public on 1st September and will be on view till October 30th, 2016. The exhibition has been divided into 5 themes, namely, life, artist, patron, researcher and ambassador. Her life is explained through photographs of various stages alongside texts.Born in Italy to wealthy Swiss parents, her parents encouraged her to study art and she studied painting and sculpture in Brussels in her early years. She continued her art education in Basel where the famous Swiss sculptor Carl Burckhardt became her master. By 1925, Alice had her own studio near the University of Zurich. She also began participating in exhibitions and her sculptures were displayed in public parks in Switzerland. Her wealthy parent’s contacts and the support of her aunt, artist Juliet Brown helped her greatly. She travelled widely and her journey took her to Italy, Morocco and Tunisia. During these sojourns, she photographed and sketched the daily life of the people she encountered. She often made detailed sketches based on the photographs that she used to take. From the sketches on display, we can make out that young Alice showed keen sense of proportion, layout and understanding of composition. Thus, during one of her trip to Morocco, she took a photograph of a calf bearer which she later on worked in her studio in the form of a sculpture in 1929.This iconic sculpture was installed in 1959 in Rieter-park beneath the  Museum Rietberg in Zurich where it still stands today.

In 1926, Boner attended a dance performance by the young dancer from India, Uday Shankar in Zurich. On her invitation, he danced and posed exclusively for her. While he danced, she took photographs, from which she made sketches and then turned it into a sculpture. She later toured  India alongwith Uday Shankar. 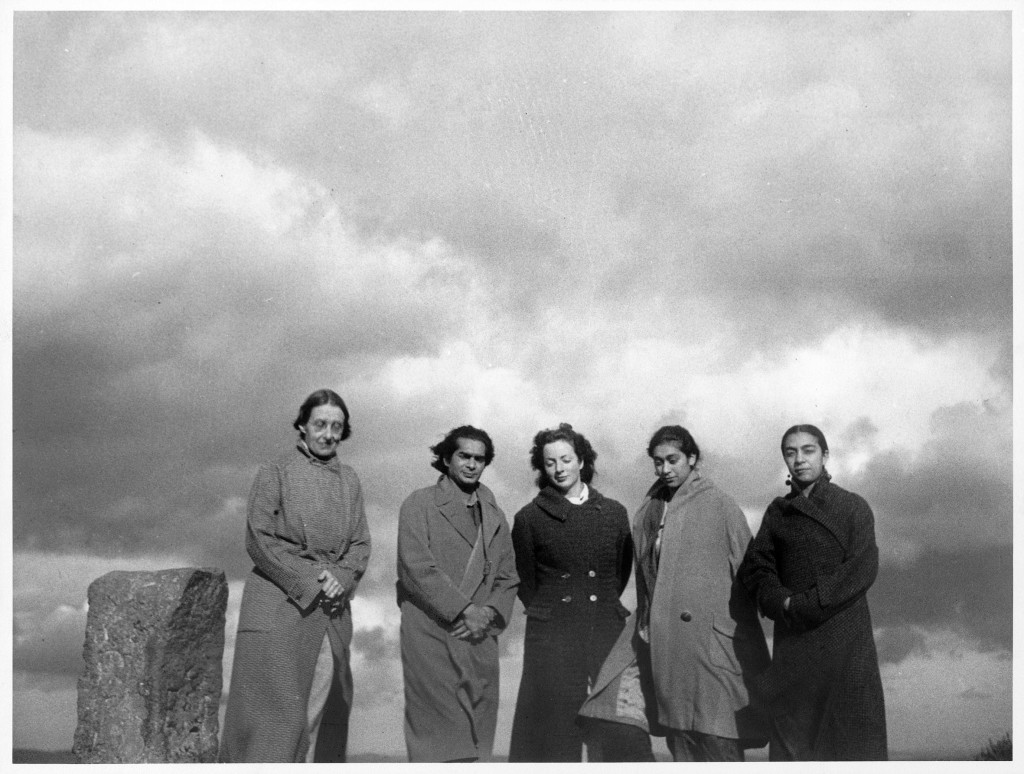 Alice Boner, Uday Shankar and Zohra Zehgal along with friends

In 1930 itself, she returned to Paris with Uday and she promoted him and his dance form for nearly five years. A handmade poster designed by Alice Boner is displayed in the exhibition which showed the extent to which she helped promote the Indian dancer and the dance form. 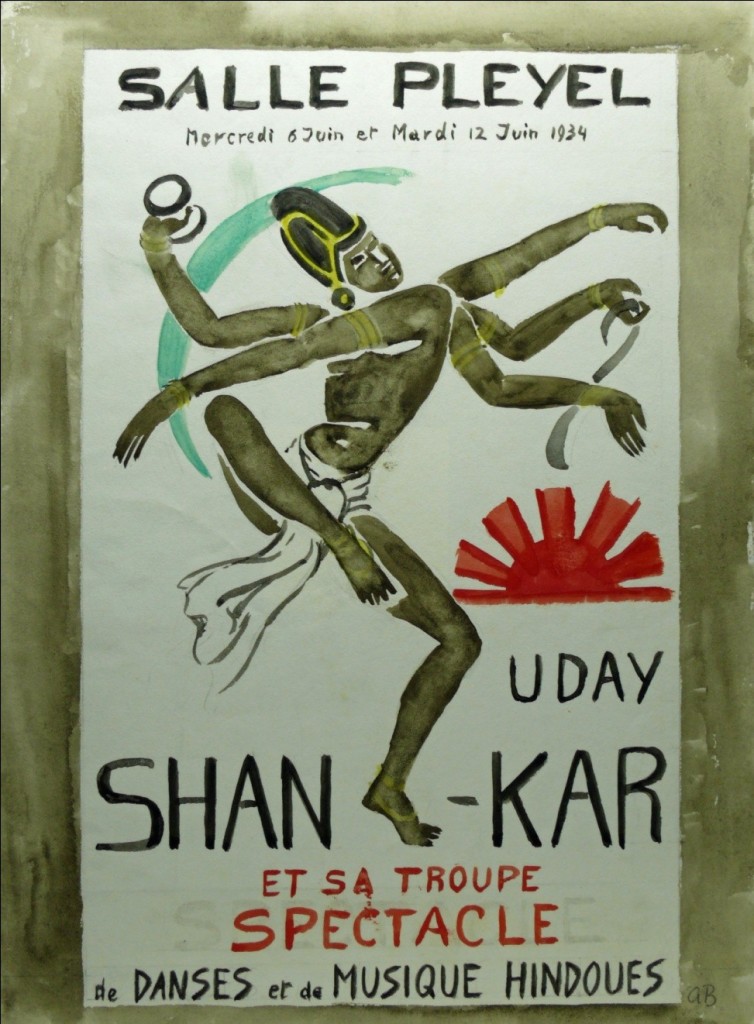 A handmade poster by Alice Boner-1934

In 1936, after her breakup with Uday, she returned to India and visited Varanasi. Here she bought an old house in Assi ghat and decided to settle down choosing to lead an Indian way of life. From her writings in her diary, we can see that she was quite taken in by the leisurely life and the quiet and at the same time bustling charm of life in those days at Varanasi. She brought out her paints and brushes and once again started drawing and painting as there was no dearth of subject matter for a passionate artist in this holy city. Her drawings and paintings of pilgrims and the daily life seen with an European eye shares close resemblance to the paintings of another great woman artist Amrita Shergil who too received her art education in the west, but chose to paint the men and women of rural India. 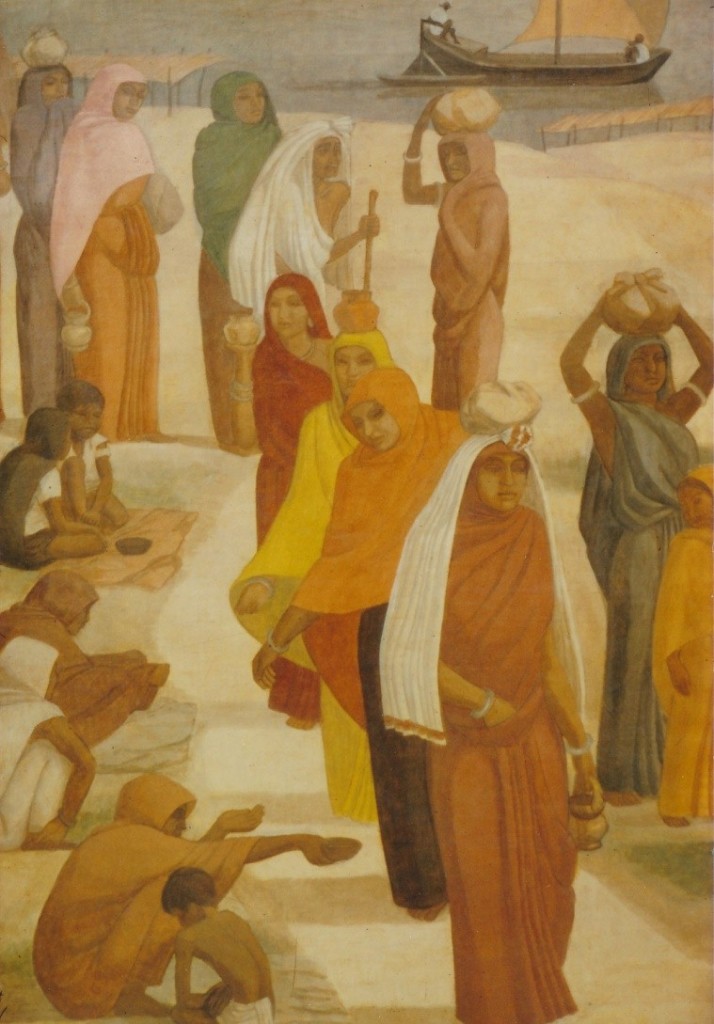 Panchakroshi Procession, Benaras,1942-Photograph of the oil painting by Alice Boner

An oil painting of women giving alms to beggars on the ghats (steps near the river) displayed in the exhibition is a well executed painting for which she made elaborate sketch which also is displayed. The similarity I found in both the women artist’s paintings is the way they have treated the figures of women as well as men portraying them with round contours and flowing shawls or sarees and robes laying emphasis on movements and actions. Alice has used very subtle colours in most of her paintings even when they are of the dancing Kali figure, probably revealing her own soft and generous personality. She also sensed the danger of falling into a picturesque but superficial mode of painting and successfully averted it.

Boner traveled extensively in India visiting temples and also sketched and drew the sculptures as artists normally do. While ordinary artists only see the drawings from an outside perspective, she dwelt deep into the drawings and sensed a geometrical scheme and lines of energy while drawing the relief sculptures at Ellora in 1941.

She studied the sacred sculptures and temple architecture of India through making analytical sketches. According to her, while a sculpture is set in a square or a rectangular frame, the key geometrical element is a circle. She used a grid diagram to understand the placing of the positions and angles of the limbs in Indian temple sculptures. Her discoveries lead her to publish a book ‘Principles of composition in Hindu sculpture’ which till today remains a seminal book. In 1957, she met Sadashiva Rath Sharma, a Sanskrit scholar of repute ,who made her study the manuscript written on palm leaf called shilpa prakasha, which was an architect’s manual on temple construction. Boner found that her own derivations matched with what was mentioned in the text thus corroborating her theories. She also wrote a book on the Sun Temple in Konarak in Orissa state. Inspired by the findings in the manuscript shilpa prakasha, she began painting a triptych namely prakriti, vishvarupa and kali around 1952. She worked on these paintings for several years and they are on display at the Bharat Kala Bhavan Museum of the Banaras Hindu University at present. 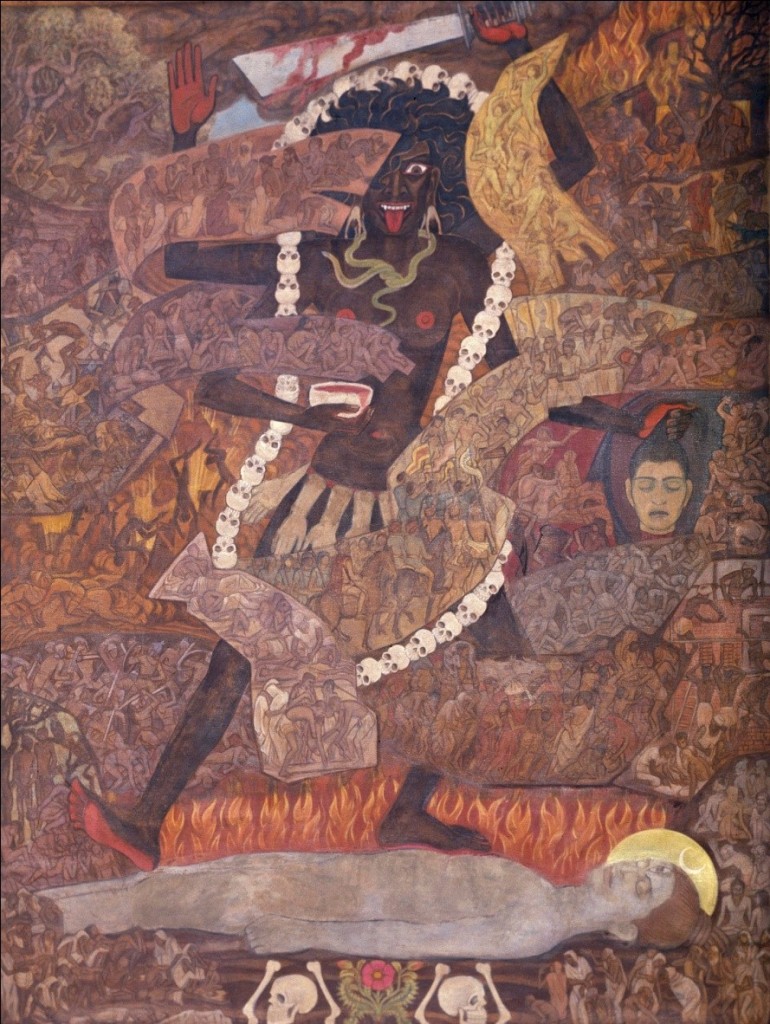 Prakriti-Photograph of the oil painting by Alice Boner

In 1969, Alice Boner, the visionary from Switzerland, was conferred an honorary doctorate by the University of Zurich for her contributions and publications and in 1974, she was awarded the Padma Bushan by the Indian government. In 1978, ill health made her return to Zurich where she was nursed by her relatives. She died on 13 April 1981 leaving a rich legacy behind. 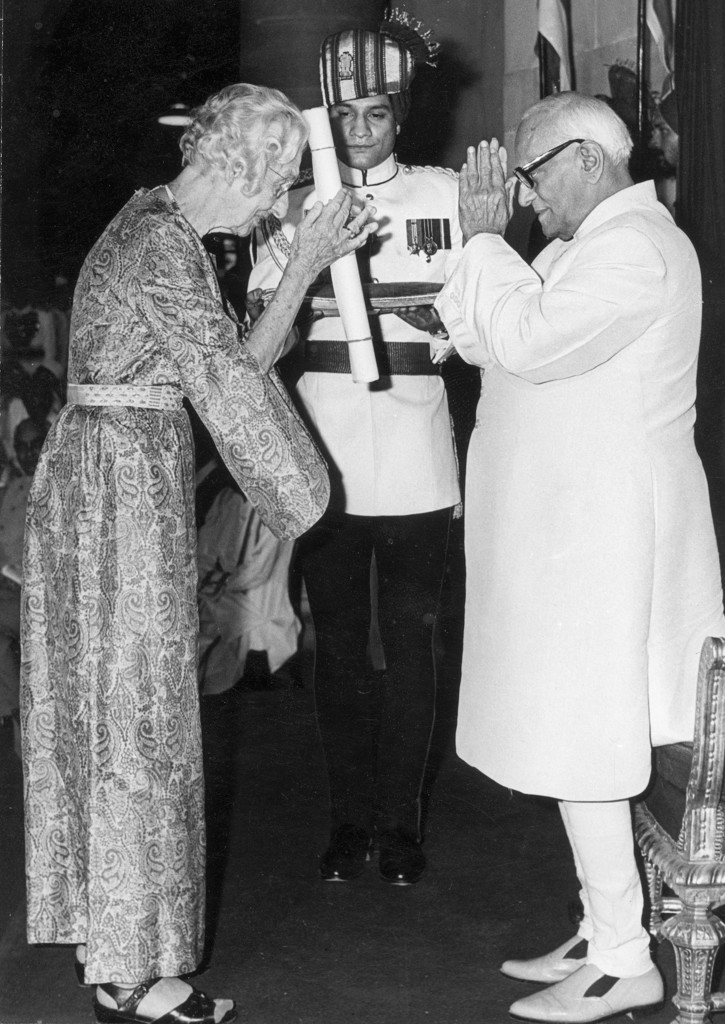 Alice Boner receiving the Padma Bhushan from the President of India, 1974

In a true spirit of showing her love for India where she spent a considerable amount of time, she donated a significant portion of her collection to Bharat Kala Bhavan museum of the Banaras Hindu University which houses today a permanent gallery in her name. She also donated a part of her collection of 588 Indian miniature paintings and around 130 masks, sculptures and art objects to museum Reitberg, Zurich in 1971.

A lot of planning and thought has gone into the display and organizing the exhibition on the life and works of the Swiss artist, Alice Boner, at the National museum, India, by the various agencies involved including Museum Rietberg, Zurich and it helps us to understand the various facets of her interesting life. Visitors can even view her personal belongings like her passport, diaries, camera and the suitcase which must have contained these at the exhibition.