Bernie Siegel says “True inspiration overrides all fears. When you are inspired, you enter a trance state and can accomplish things that you may never have felt capable of doing.” That is the beauty of trance art. A trance artwork has the power to hold you as if you are in some spell.

Trance is a hypnotic phase in one’s life and is a psychological aspect of a being which makes them render information and enable them experiences which a normal human being might stay untouched throughout his lifetime. Trance art is a transcendental experience that is sublime in a larger sense of the term.

Sublimity is a very key term regarding the fact as trance art can completely awestruck the receiver and enables him to achieve a higher state of being. Whether it is art, as a form of visual representation or trance as a medium of entering this stage of sublimity both equally produce the same effect. This effect is the attainment of that unknown knowledge which the person receiving it is also incapable of understanding. It’s almost magical and fictional but yet it is real.

Trance has always been associated with high energy when the mind is at a level beyond its basic operational limit. It is this very moment that enables a human to understand and undergo experiences he has never thought of. A lot of psychologists use hypnosis and let their subjects undergo a travelling experience in mind through which they can attain that level where they are said to be in a trance so that they become a medium to deliver what belongs to a higher intellectual stature. The information received or gathered during this phase never erases and also is understood in a much better way than being in a normal state of mind.

People are said to consume stuff like marijuana to achieve the transcendental phase of trance. But it is not the sole medium which one should adopt. All over the world art as a form has taken its stance on what it can mean on canvas. The effect of a trance artwork is no less intoxicating than any narcotics substance. A lot of artists have tried to reproduce trance art through colours and sketches and take the viewer in a state where he can devour meaning. 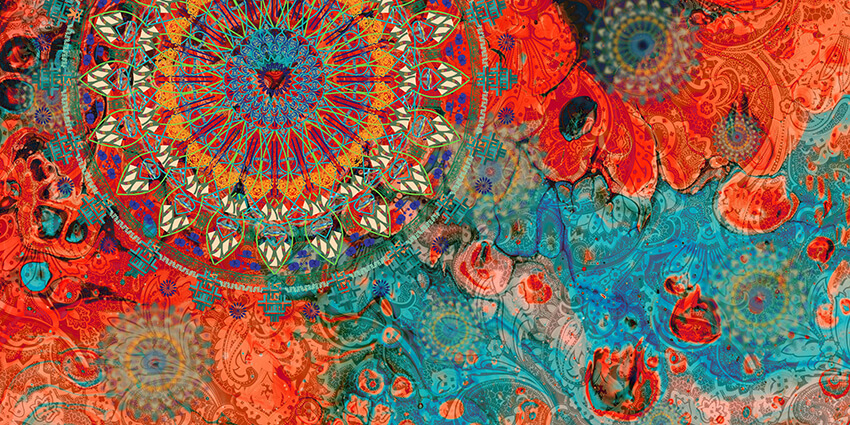 Speaking in the context of India – Lord Shiva and Trance has always been in harmony. Dance as a performing art has exhaustively explored this aspect and many performances have been set up where Lord Shiva’s portrayal in a state of trance has been depicted either in the form of ‘tandava’ or in stature of calmness. Trance art has a distinctive state of extremity. This very cosmic divinity of Lord Shiva has also experimented in the field of art through paintings and sculptures.

A very small hill station in Himachal Pradesh namely Dharamsala has a temple named Bhagsunath Temple followed by a café called Shiva Caféin its vicinity. Both these places are at a stretch of 2-3kms from Mcleodganj and one needs to trek to reach the café where Lord Shiva in a state of trance has been painted on huge mountains and rocks. Whenever a reference of Shiva is made, trance art follows it in interpretation and understanding. For religious followers, it is a form of devotion.

But a trance artwork is more than just a symbolic Shiva representation. In the Indian context gods and goddesses are considered divine figures that are capable of miraculous acts and thus are worshipped. This belief in something unseen and age-old also makes people believe in them. But it is not the blind faith I am talking about but the actual capability in some to undergo experiences where they have foreknowledge of events.

Kalpana Yuvarraaj, an artist shares, “I painted this in March 2013, during Natyanjali (an annual dance festival presented on a large scale at the Chidambaram Natarajar Temple in Tamil Nadu, South India). I thoroughly enjoyed the dance performances and it brought me into a trance. In this trance artwork, my Ganesha is enjoying the cosmic dance and he is in a trance as he is in the process of nattuvangam.”

“It is indeed intriguing to recognise that Ganesha’s gaze reflects a heightened state of blissful indulgence; a poignant moment of celestial intoxication. And of course, Mooshikan, the rat who is Ganesha’s mythological vehicle, is not forgotten and is placed in a stance that guarantees salvation, at the feet of his master. This trance artwork is exemplary in the sense that it carries the mellifluous transference of the trance of the artist to the trance of the subject in her painting. In turn, this feeling of a trance is so effectively felt by the on-looker.”