Art is Anything You Can Get Away With - Artsome

The nineteenth century French artist Edgar Degas believed that “Art is not what you see, but what you make others see.” Little would he have realized that almost a 150 years later, art museums around the world would double up as “Pokéstops”!

Believe it or not, the Pokémon Go mobile app released in early July 2016 across 25 countries around the world has some 26 million daily active players in the US alone and has earned its creators Ninetendo some $14 million, an amount which is growing by leaps and bounds on a daily basis.

Such is the rage around this virtual reality game wherein players are supposed to catch cartoon monsters or Pokémons on their smartphones, using the real world as a backdrop for this purpose. Thus, instances are being reported from around the world wherein people chasing their favourite characters have walked into the ocean or jumped off a cliff whilst being deeply engrossed in the game.

The actual locations, stops or points where gamers catch characters are known as Pokéstops. With interest in visiting museums, particularly amongst the youngsters is observed to be dwindling over the years, several museums have allowed these Pokéstops to be set up within their premises in order to encourage footfall. Yes, Pokémon Go is being used to actually woo visitors to museums, besides the art of course!

The Museum of Modern Art (MoMA) has created two Pokéstops, one being bang at the front gates, enabling players to get into the game right at the start, whilst more cartoons are within galleries amongst the Tony Oursler and Rachel Harrison shows, which currently going on.

At the Philadelphia Museum of Art, there are eight Pokéstops around the building. The museum is “devoted to the idea of creative play”, according to its associate director of digital marketing, Chessia Kelley, who helped create a Pokémon meet-up during the museum’s “pay what you wish” hours.


Owing to this smart strategy, attendance has actually jumped to 37% higher than the average during the first quarter of 2015, though it is easy to distinguish between those coming in for the art or for just “play”.


Meanwhile, other museums such as The Morikami Museum and Japanese Gardens in Delray Beach, Florida, is encouraging Pokemon gamers within the premises owing to the cultural connection, as Pokémon was originally created by the Japanese game designer Satoshi Tajiri in 1995. Monika Amar of the Marketing Department stated, “We felt we had a direct cultural connection to the Japanese franchise and have 15 Pokéstops at the museum. Our attendance has spiked in the days since the application was first released. We’ve found that once people come to play Pokémon Go, they return to experience the museum and gardens and for the opportunity to ‘catch ’em all’ in a picturesque landscape.”

However, disgruntled visitors, especially those who wish to enjoy the peaceful and pristine environs of the museums and the art on display are quite disturbed by the nosy and noisy group of motley gamers and some have even posted photos of the vandalized garden.

A museum  goer with an annual membership to the Morikami gardens, Kandi Kalistar opined, “I’m so appalled my serene quiet place is marked up by idiots chasing Pokémon. I’m disgusted by the lack of courtesy of these kids, but it’s not only kids. Have respect for the environment around you.”

Besides, the United States Holocaust Memorial Museum in Washington has also sought removal of the Pokéstops from the museum as according to Andrew Hollinger, the museum’s communications director, “Playing Pokémon Go in a memorial dedicated to the victims of Nazism is extremely inappropriate. The museum encourages visitors to use their phones to share and engage with museum content while here. Technology can be an important learning tool, but this game falls far outside of our educational and memorial mission.”

Whatever side of the argument one chooses to be on, eventually the sanctity of art should not be violated and encouraging footfalls should not disrupt regular museum goers’ tryst with art. 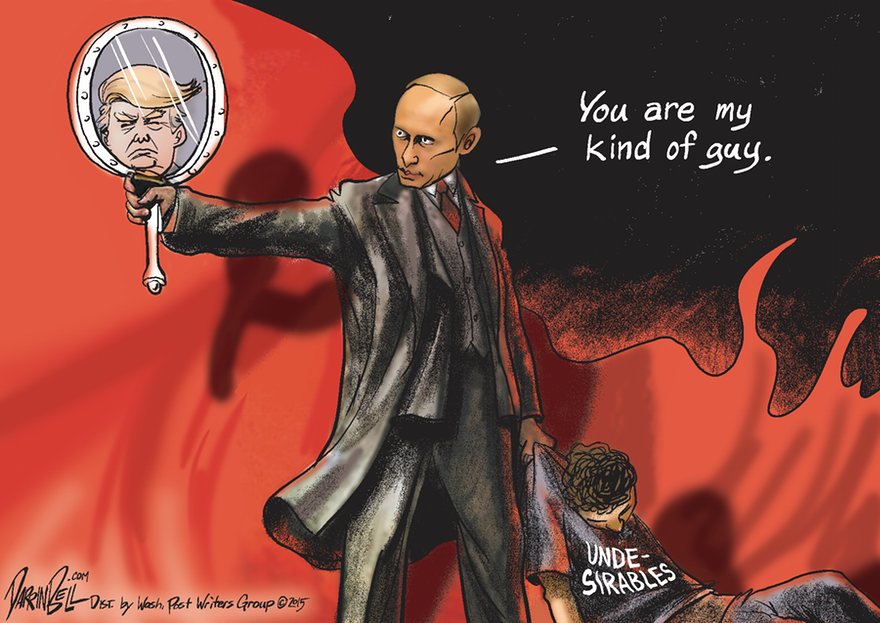 The United States of America is all set to choose their new President between Hillary Clinton and Donald Trump in the next few months and the world watches as the great election tamasha unravels. Co-inciding with the Republican National Convention, the iconic Comic-Con festival also took place in the same week of July and this is what artists thought of the Republican candidate: