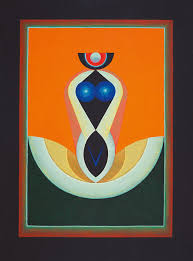 In a quiet by-lane of Mumbai’s iconic Kala Ghoda District, the stunning two-storied colonial styled mansion of Delhi Art Gallery currently plays home to an impressive show, the retrospective of GR Santosh – a trailblazer, albeit an unassuming one- and easily one of the most important Indian artists, of the neo-tantra movement.

Ghulam Rasool Santosh, popularly known as G R Santosh, was a self-taught artist. He began his career painting landscape in his native Kashmir until he was discovered by S H Raza himself, who encouraged him to study at Maharaja Sayajirao University at Baroda. Santosh trained under the famous artist N S Bendre at the university.

For a few years after this, G R Santosh created figurative and abstract works which resonated the work of the other Indian Progressives. However, in 1964, Santosh had a deeply mystical experience in a cave in Amarnath and this marked the turning point in his style and career. He abandoned the landscapes and abstracts and devoted himself and his art to the practice of tantra, from then, until he died in 1997, living as much a yogi and an artist.

DAG previously had a spectacular showing of the retrospective in Delhi 2011, before bringing it to Mumbai in August this year, for the first time. It is an all-encompassing showcase that consists of G R Santosh paintings from his earliest period to his last works, spanning over more than 120 separate pieces, in various media.

Upon entry, on the ground floor, the spacious-white walled room highlights some of his most spectacular tantra works, with abstracts of a female seated on a lotus emerging from the meticulously painted detail. These pieces are all either acrylic or oils on canvas. As one move upwards, to the higher floors, the walls along the staircase are covered with his smaller pieces, which include tantra work by G R Santosh and sometimes his older works, such as landscapes, in varying media. The first floor consists of G R Santosh paintings especially his earliest abstracts, explorations of the human figure and his landscapes, works that date back from the 1950s-60s.

Without being arranged in chronological order, it is interesting to see how the exhibition still conveys a holistic sense of G R Santosh’s diverse and broad practice. Through G R Santosh paintings, one can see his growth as an artist - from amateur to professional; observe the transitional stage (sometimes referred to as the Early Tantric Period) to his vast body of tantra works. That G R Santosh was a dedicated yogi and tantra practitioner is visible in the details of his works itself. The hues are carefully highlighted and lines and curves are clean and sharp. There is no jarring element in his exploration of tantra works. Each piece radiates a sense of calm and one look is enough to elucidate that creating the work was perhaps as much a form of meditation for the artist, as the actual act of meditation. His unique ability to capture light in the form of colour is incredibly visible even today, where despite age, his works seem almost luminous, whether they are watercolours or oils or acrylic.

One of the highlights of this exhibition is the vast body of hitherto unseen archival material. The multi-talented G R Santosh was also a poet, and the exhibition displays some of his poetry (published and unpublished) in Kashmiri and English, his writings on tantra (in English), a story-board for a comic and several drawing explorations of tantra symbols, part of his extensive study on the subject, sadly left incomplete.

The exhibition is one I’d describe as a complete study on the life and work of the artist. DAG has mounted a well-researched exhibition which has delineated the place occupied by the noted artist within the trajectory of modern Indian Art. The exhibition is as important for the works on the display as for the role it plays in complimenting the study of modern Indian Art. Its location in Kala Ghoda adds to the significance as it ties in with the long history of the site with the Bombay Progressives.