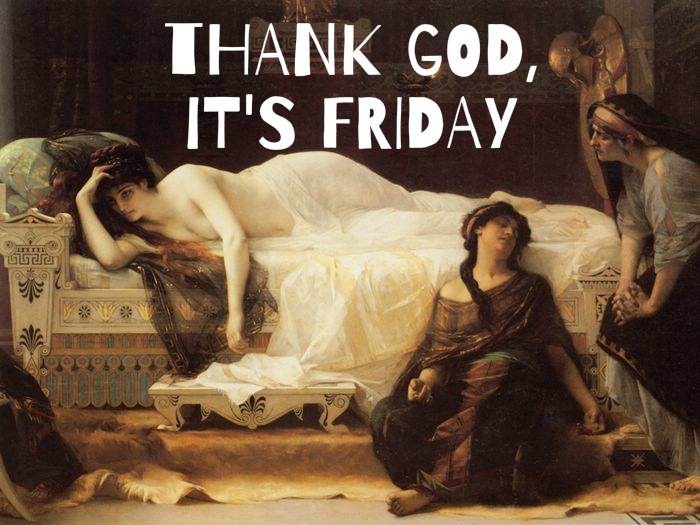 It’s that time of the week: Friday. And no matter how much I love my job I find myself dreaming inadvertently in spurts of the bed that awaits me at the end of the day. Sleep can finally extend beyond alarms and snoozes, sunrises, breakfasts, lunches and beyond. This sleepy rainy Friday has me dreaming about my little bed, luxury beds, and historical beds and of course arty beds.

This fluffy, cosy space of comfort has caught the attention of artists for innumerable reasons. The Renaissance artists used the bed to depict death; dying and sleeping as synonymous in Renaissance art and poetry. Rococo artists, the more decadent of the lot, had women in all shades of nude sprawling suggestively on luxurious beds. Some artists painted the bedroom and the bed to depict class affluence, some to reflect personal relations, love and strife and some to reveal nightmares, hopes, dreams and sorrow. Artists like Tracey Emin and Vincent Van Gogh have used the bed as an extension of their self when it is at its most vulnerable, that is while sleeping. Olympia’s bed scandalised the world and John Lennon and Yoko Ono’s bed became a symbol of peace and protest against war.

So here is a look at the beds depicted in the works of artists from the subcontinent.

The Passing of Shah Jehan This painting of Abanindranath Tagore shows a devout looking Jahanara at her captive father’s feet, who longingly looks at the Taj while lying on his death bed. He had just lost his daughter at the time and the painting probably tries to capture his own feelings at her death. The early modern artist depicted the private space that Shah Jehan inhabited to depict death and mourning. It is a private morning of loss of the emperor and not a public one. Amrita Sher-Gil painted the inner lives of women. Candid portraits, self-portraits, homes, bedrooms are all painted with an empathetic eye. The painting Woman on a Charpai portrays the quiet and sparse feminine space and yet in the face of the woman there is an expression of pain and discomfort. The woman fanning her sits in anticipation and wait. This seems to be a birthing scene. Unlike Abanindranath Tagore, Amrita Sher-Gil seems to be depicting the bed as a space of birth meanwhile exploring the pain associated with it. 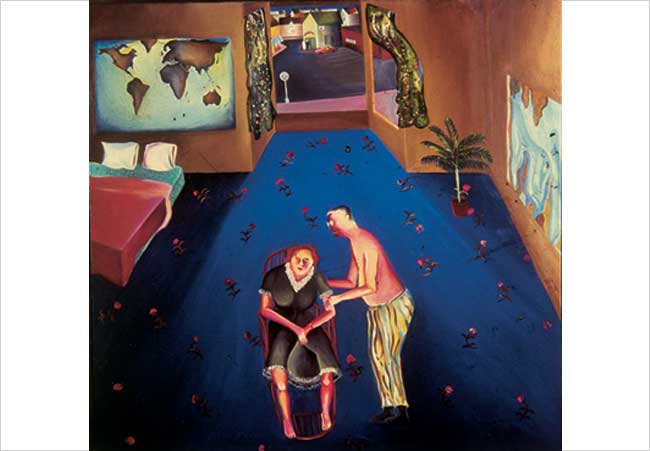 The everyday personal and public plays a significant role in Bhupen Khakhar’s paintings which are mostly an autobiographical representation. Painted in 1979, this is an early work from his exploration of the personal. Previous to this his portrayals were men in public spaces, the tailor or the watch repair man at work but in this painting he paints the weatherman in his bedroom. The bed neatly lies in the background unused as the man seems to be placating his angry wife. 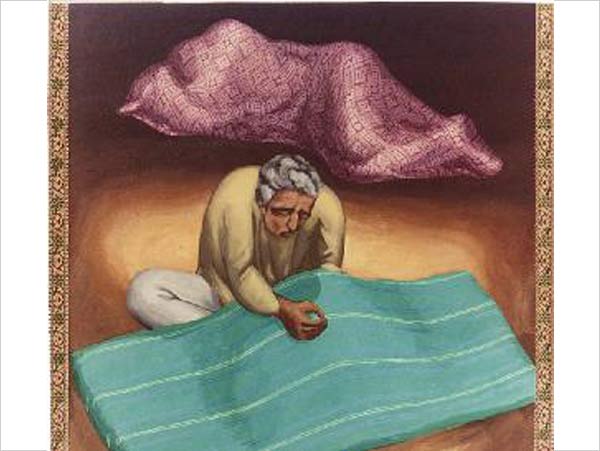 If only sleeping on it could all the worries in our heads. Sudhir Patwardhan as an artist is keenly interested in the mundane, the ordinary and the underprivileged and how these lives are fragments, and isolated due to experiences peculiar to urban life. In his painting Sleep, the two men are not in a conversation. Sleep is seen as something that increases the isolation of man. He does not see it as something that gives rest as the expressions on the man’s face is one of despair and suffering. 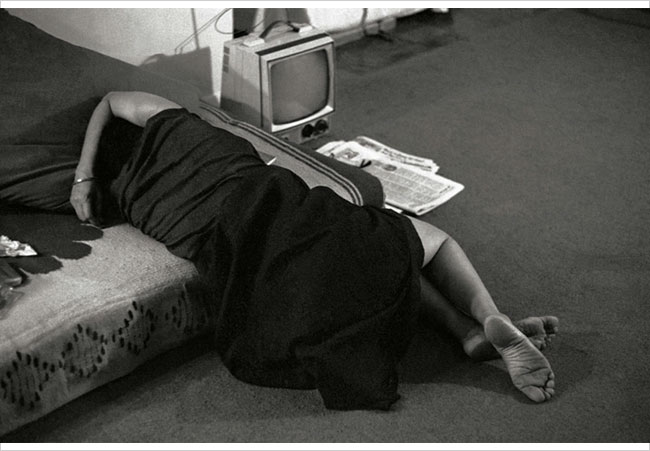 There is something voyeuristic about cameras and especially when they enter the private space of the bedroom. In this photograph, Richard Bartholomew captures his wife Rati sleeping awkwardly on the edge of the bed; having fallen asleep while reading. With photographers, the bedroom acquires new meanings of representation which is realistic, intrusive, personal and poignant. 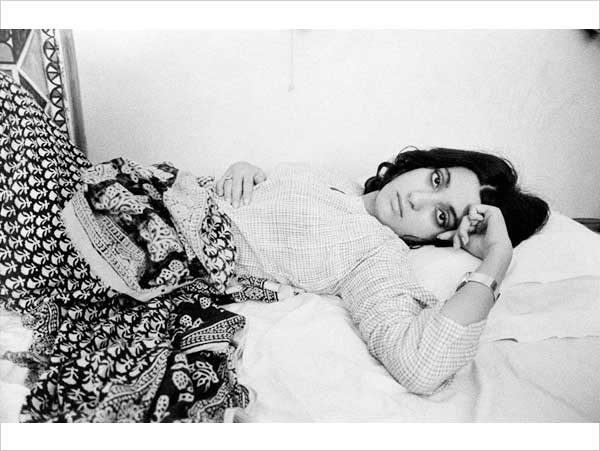 Pablo Bartholomew too photographs a private moment. Pooh, a friend or a lover, lies in bed staring directly into the camera in the way that Olympia must have looked at Manet. Pablo often photographed, like his father, his friends, college parties and family and now his archive of photographs can be studied to trace a social history of the 70s. 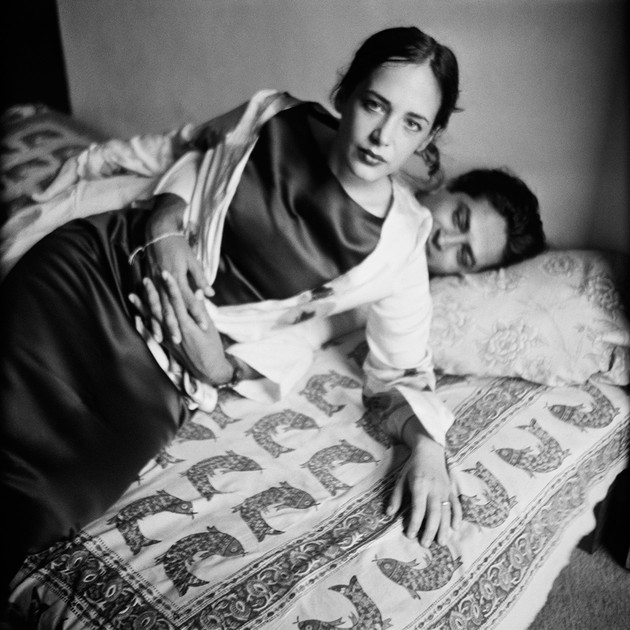 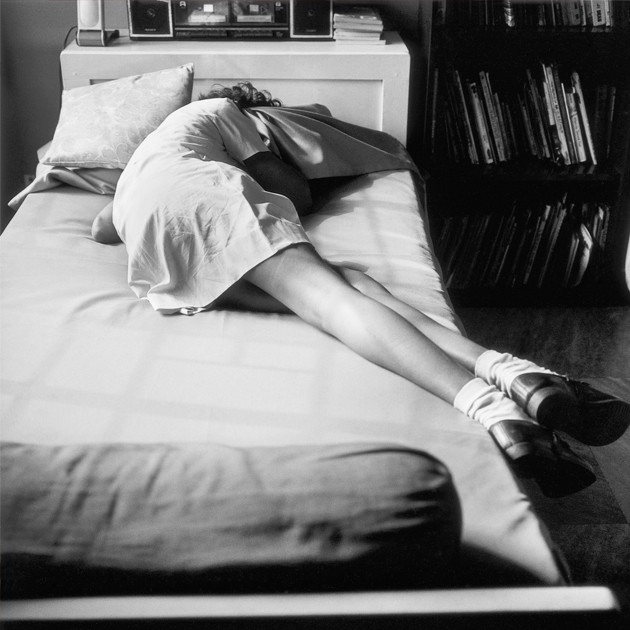 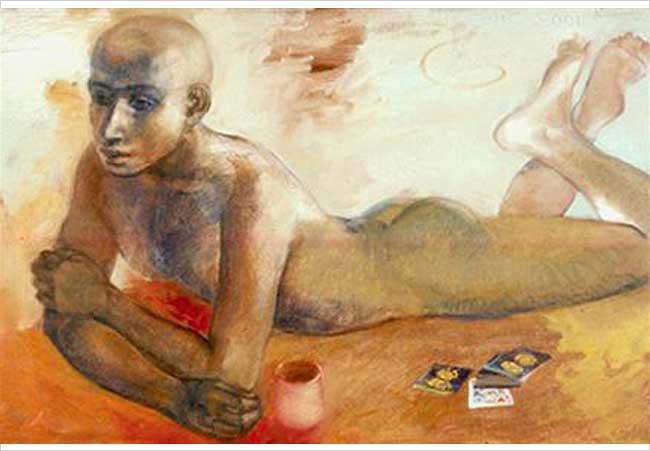 More recent artists depict the bedroom for an exploration of the self. The bed or the bedroom is so private and significant to modern individuals especially those dwelling in cities and privileged enough to have a room of one’s own that the bedroom becomes revealing of the personality of the inhabitant. Artist Anupam Sud paints a contemplative portrait, naked in the privacy of her bedroom.

Impossibility of Being Feminine 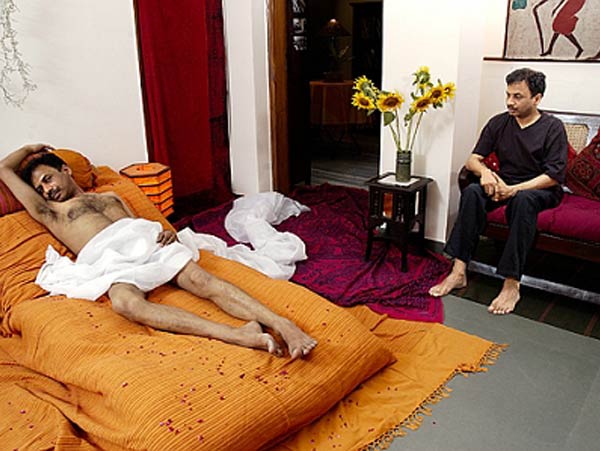 Still from There is a spider living between us 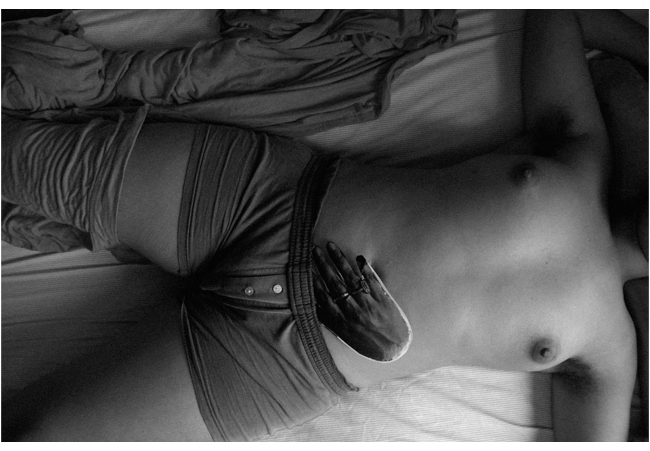 Tejal Shah, Still from There is a spider living between us, 2009, single channel video, 6:45 min

Tejal Shah too investigates a relationship between herself and her sexuality in this video. The bed becomes the site of investigation of her own desire. In the video she uses her image, lying in a bed or climbing a tree, while a cut out image of her mother’s hand roams freely along her body. The artist is interested in identity and identity politics and what better space to explore that other than the bedroom. 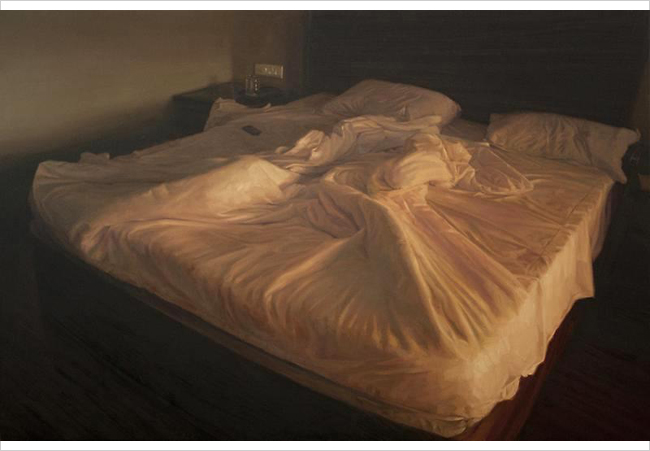 Karmakar is keenly interested in claustrophobic domestic spaces. Be it the adventure of hotel rooms or the intimacy of personal homes, he paints them all. In these paintings of hotel rooms, there is impersonality in the beds and the fabrics so that innumerable people come and sleep in these beds and leave. The beds that he paints then carry the traces of these visits in its creases and ruffled sheets. 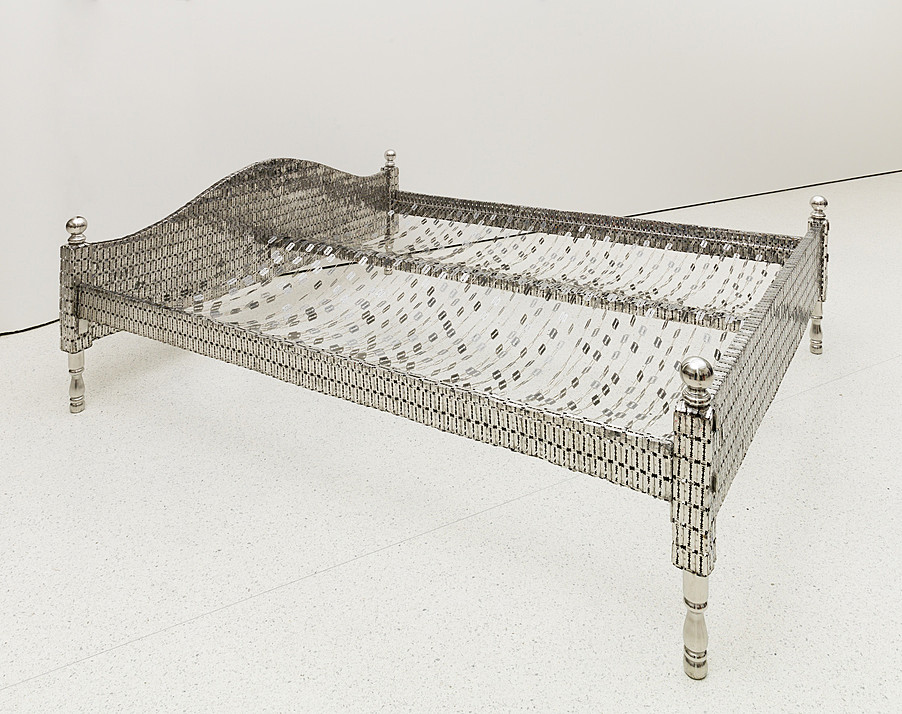 Tayeba Begum Lipi in this work creates a bed out of razor blades, making it both inviting and threatening. The blade here comes to represent not only violence but also childbirth. Blades were initially used in medical procedure to cut the umbilical cord. Just like Amrita Sher-Gil’s bed, Tayeba uses the bed as a metaphor of childbirth and violence. The steel of the blades also represents the tenacity of women. 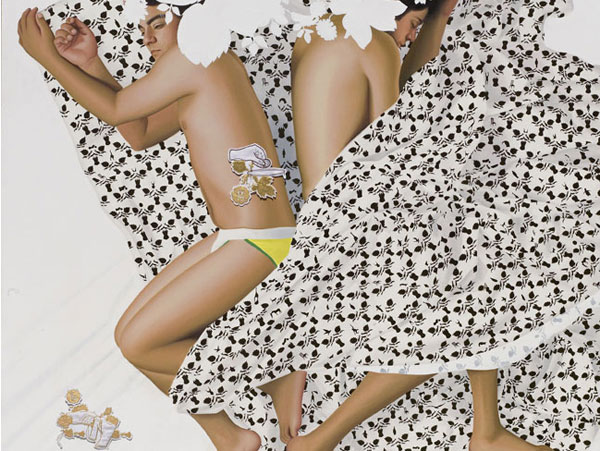 This work by Thukral and Tagra is from the series “Make Art Stop Aids”. In these anti-AIDS works this particular one has two men sleeping with their backs to each other on a prettily patterned bed sheet. If you look closely you will notice a hand throwing out a used condom and in the corner lie used condoms and wrappers. The bed as space for making love is used to raise awareness about unprotected sex and AIDS. 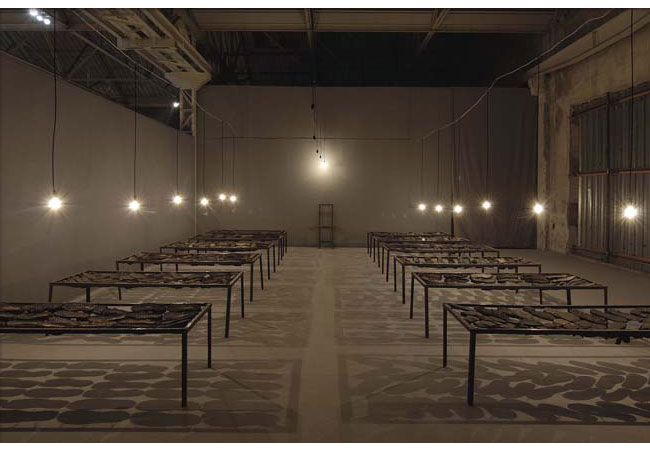 In this work, Vivan Sundram makes 12 beds out of shoe soles and installs them under light bulbs that hang from above, give the stark landscape a very menacing look. This space and the atmosphere is somewhere a cross between a hospital ward, military dormitory and torture chamber. The beds symbolise the absent sleepers- the tortured victims of war and violence.

The Death of Sir Raja III 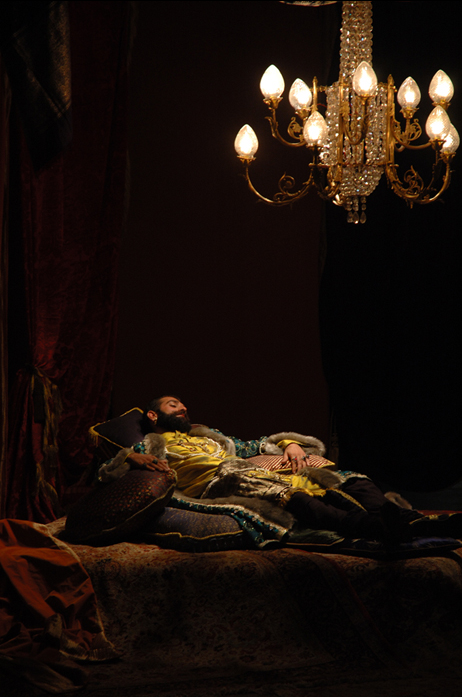 For the last bed of today’s post we go back to colonial history. Nikhil Chopra obsessed with colonial history, in this performance that went on for three days, portrays the life of a decadent Indian prince surrounded by wealth and jewels in a tableau vivant. In this Sir Raja is dying and wants to be painted so that he converts the personal moment of dying in one’s bedroom a long-drawn out performance.

When artists use a personal expression of fear, longing and desire it acquires a universal language. In all these works the bed as a metaphor for various emotions of the individual has been mapped on to that of a community or nation, making them universally so meaningful and appealing.