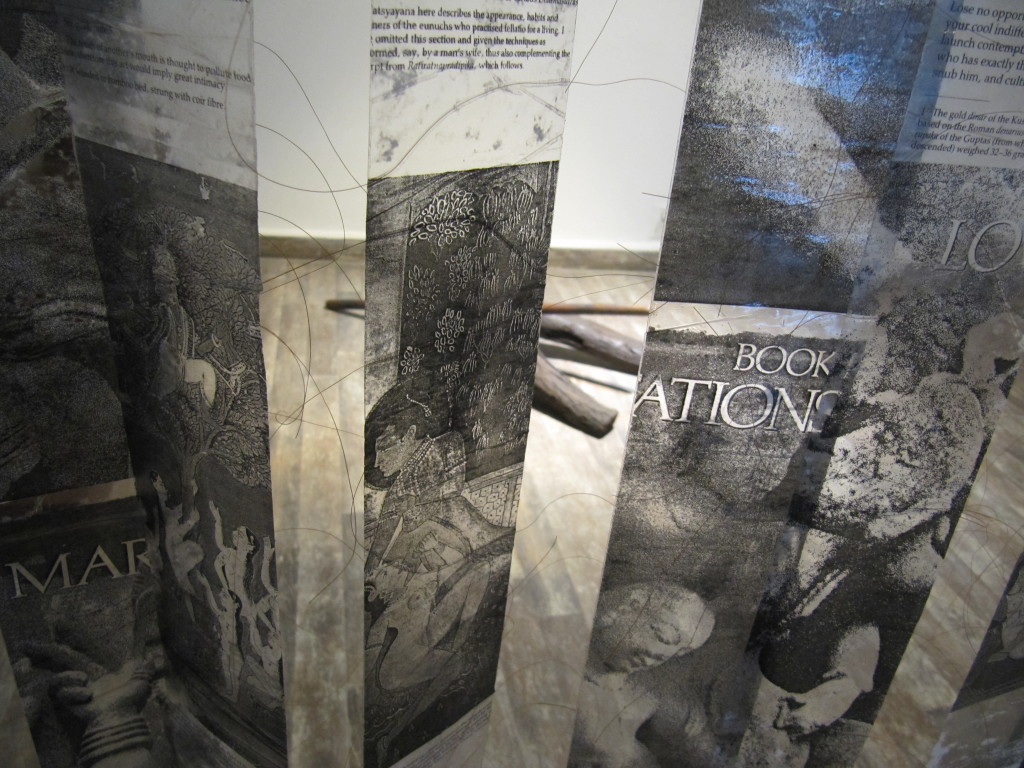 It’s like entering an Indian shrine with hues of Vermillion marital sanctity coupled with the violence of Thick Maroon feminist rebellion. The elements that construct the works in this exhibition hit you in the deep with their symbolic importance in the Indian cultural tradition- red chillies, spices, ash, dried fish and plastic garbage.

In the international context, India is often a portrayal of mythology, the great epics and texts, and elaborate temple art and architecture. Through the use of iconography from all of these, she addresses issues of rape, promiscuity, female orgasm and feminine beauty in her narrative under the title ‘Crossing the Lakshamana Rekha’. She questions this idea of protection that is endowed on women by their male counterparts for their own benefit, thereby restricting their movement. This gets translated to a restriction of female needs, especially sexual needs, thus being subservient to male satisfaction and not paying heed to the female orgasm. Red chillies are not just a portrayal of the Indian household, of which women are unquestioned keepers, but also of protectors of women from alien men. 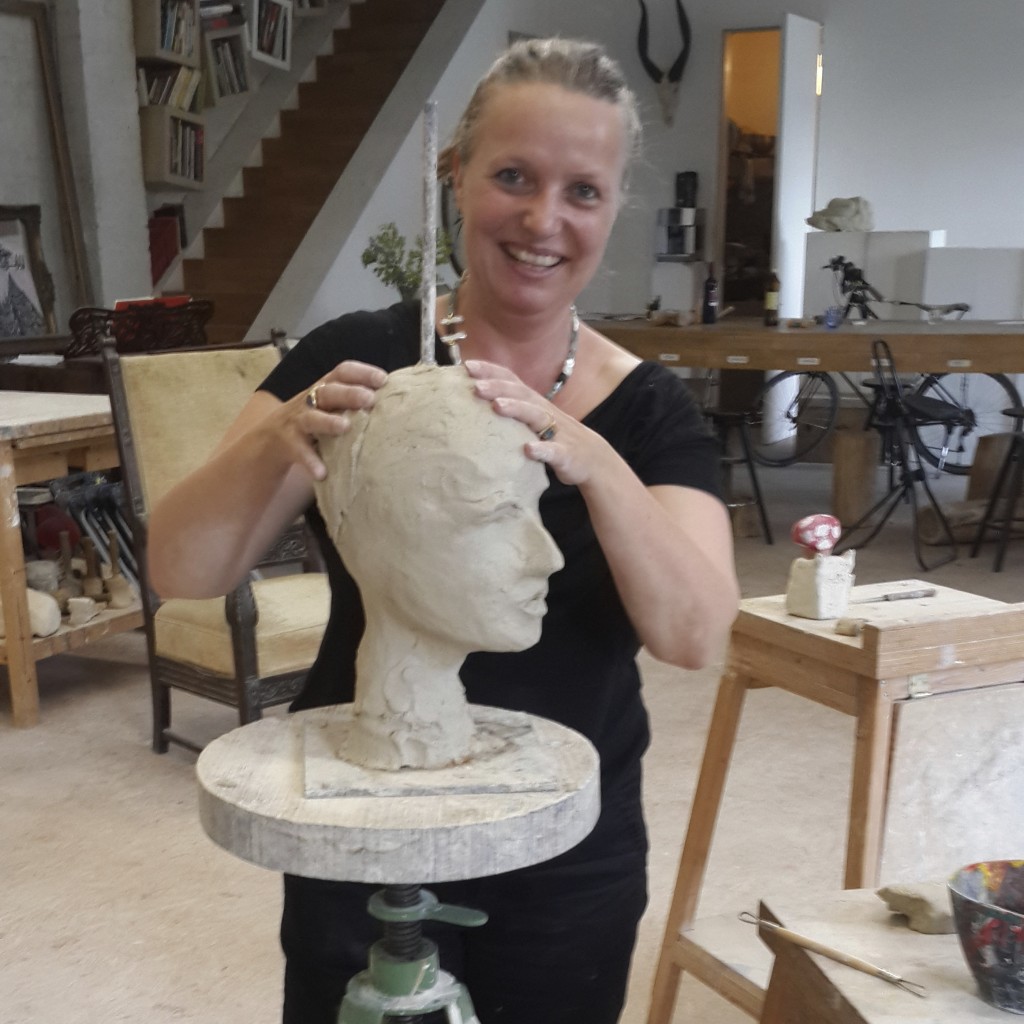 Her journey through life, beginning in Germany, through different countries and study of a vast diversity of themes such as Anthropology, Comparative Cultural Studies and Art has shaped her thought process along with artists like Marina Abramovic, William Kentridge and Louise Bourgeois. Even though she has studied Indian traditions in detail and follows the affairs of Indian contemporary issues closely, she is often considered an outsider and thus her works provide an analysis of the idiosyncrasies as visible to people of non-Indian origin. 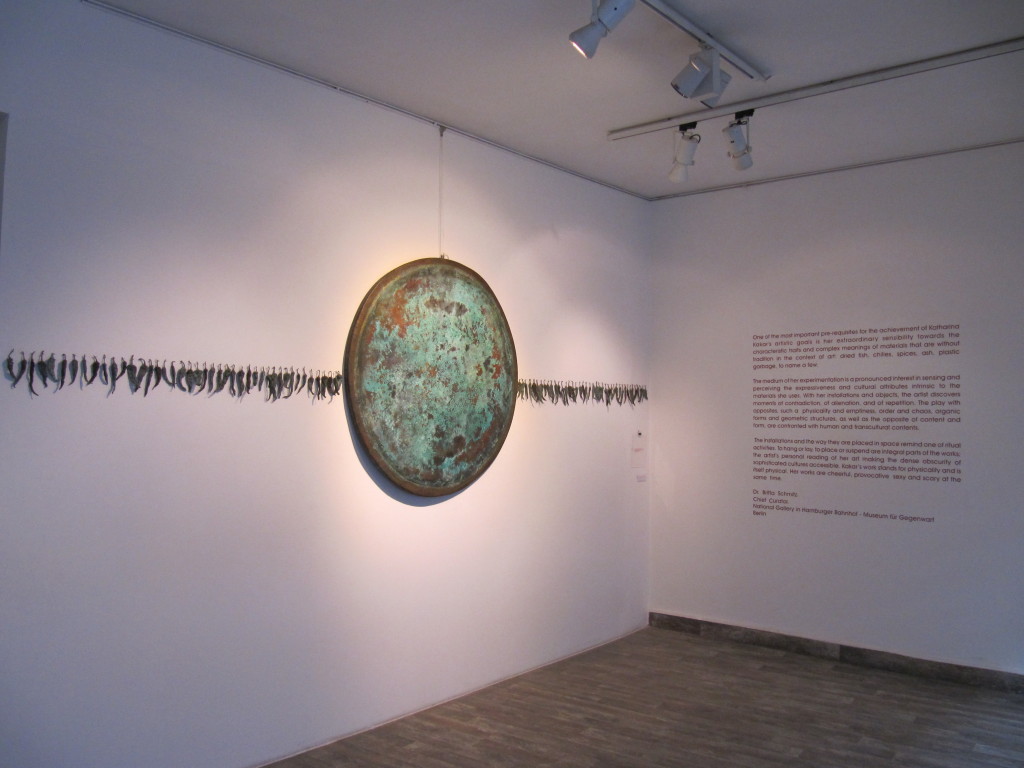 “With her installations and objects, the artist discovers moments of contradiction, of alienation, and of repetition. The play with opposites, such as physicality and emptiness, order and chaos, organic forms and geometric structures, as well as the opposite of content and form, are confronted with human and transcultural contents.”, writes Dr. Britta Schmitz, chief curator, National Gallery in Hamburger Bahnhof.

One of the works that really catches one’s eye is the Hung out to Dry that displays thirteen vaginas hung next to each other, made of plastic fibres, extremely thin that show both the physical fragility of the vagina as well as the societal weakness of the female sexual cause. 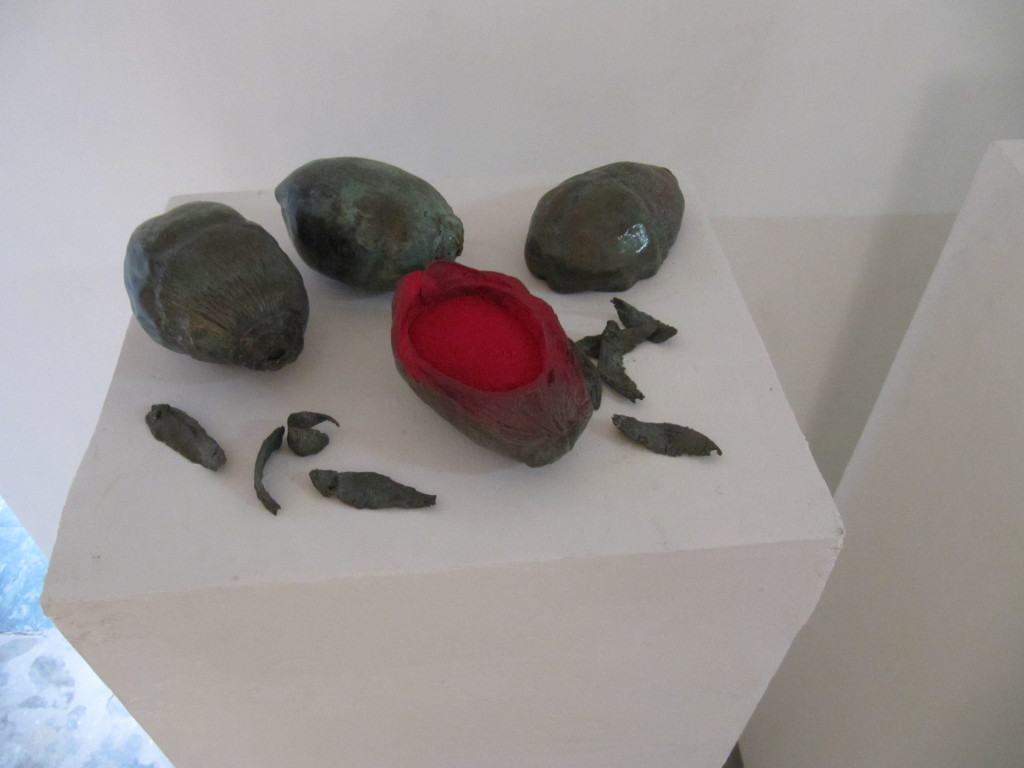 The Power to Create

She uses the colours turquoise blue and vermilion red in strategically significant positions, for instance the Colours of Ananda and The Fish and the Cool discern the fluidity, fluency and violent elegance of the female orgasm. Perhaps because of having lived in Delhi since birth; at a very close and approachable radius of the Nirbhaya case of 16 December 2012, the installation with the same name provoked agony in me because it not only addresses the despicable act of rape, but the brutality that rapes have come to represent.

All in all, the exhibition is a strong attempt by the debuting artist in terms of subject, structure and substance. It moves you and it incites you to think beyond the mundane that we live inside of, where important themes are left behind that need this call to arms. Crossing the Lakshmana Rekha successfully does that.