Part 3 |From Duchamp to HTML: Introduction to New Media

“The new media are not bridges between man and nature; they are nature”- Marshall McLuhan

Digital machine was introduced to mankind as an assisting tool, a helper but in a last few decades with an increasing interest and research in technology and wider acceptance, it has now become the very way of life, our nature of existence. It can no longer be separated from our daily routine and be called a thing of occasional use. Some artists enthused by the possibilities offered by technology began using it as a medium in their artistic expression producing unique works of art and today we see its ubiquitous presence in the contemporary art scene.

New media art is a genre that is concerned with artworks created with new media technologies, including digital art, computer graphics, virtual reality, internet art, big data art, interactive art, computer animation, video game art, computer robotics, 3d printing, art as biotechnology and their variations which keep developing every day. Hence it is a term that can be used to define art created using the new, is mostly dynamic, and created using digital tools. It often involves interaction between the viewer and the artwork, or viewer and the artist which further defines the behavior of artwork.

Modern artists have extended their practice from the conventional media of painting and sculpting, to new media technologies. This radical shift inspired by movements like cubism, futurism and surrealism which saw free use of materials and innovative ideas for representation. Many artists like Marcel Duchamp abandoned traditional media to adopt a medium that best suited their needs. Ability to play with time, duration and space using technology has opened completely new and awe inspiring techniques that engage user in multiple ways and are often multi sensorial.

Here we have a look at some new media artists and their works:

Born in 1945 Beryl is a celebrated video artist who makes artworks on the subject of technology using technology as a medium. She explores relationship between programming tools as diverse as the technology of the loom and multiple-channel video through multiple channel video installations. Just as the spinning and gathering of wool serves as the raw material for a weave, so the artist working with video selects images to serve as the basic substance of the work. Taking inspiration from this relationship between wool and images she made most of these paintings on handwoven and traditional linen canvas.

An interactive installation artist, Camille Utterback makes reactive sculptures that make viewers participate in a dynamic process of discovery and interactions. Initially trained as a painter, her work is a fusion of painting and interactive art, linking computational systems to human movement and gesture in a layered manner in an attempt to explore their aesthetic and experiential value.

ART+COM is an art and design studio based in Germany that creates media sculptures and installations around the globe that impact on their respective locations, giving them an identity beyond functionality. These works exhibit complex behaviors built using code and new media technologies. Their work SYMPHONIE CINÉTIQUE — THE POETRY OF MOTION, 2013, is a kinetic composition that explores relationship between music and mechanical motion in a space. It brings together five kinetic works that have been developed over the last five years at ART+COM. The exhibition focuses on three elements and their interplay: reflection, sound and movement and brings out their mystic harmony resulting into a unique spatial experience. Navin Thomas’s works are primarily sound installations made from public telephones, discarded TV sets, old tapes, ultraviolet lights, urinals and other such everyday materials. Through these he attempts to understand how living beings react to and co-exist with sonic magnetic environments. He maintains that we are constantly exposed to radio in some form or the other, what with our lives being dominated by modern technology.

A perfect example of the artist’s exploration of electro-acoustic ecology is his 2010 installation titled “…”. A tree-like structure made out of salvaged industrial pipes, radio antennas and discarded transistors that played blank frequencies. To this buzzing ‘tree’ were introduced live, hand-raised birds. Each time a bird flew around or perched on one of the ‘branches’, there was a fluctuation in the intensity of the sounds coming from the radio.

This installation featured in his award-winning exhibition ‘From the town’s end…’ which showcased other such sonic environments in relation to the natural ecology. 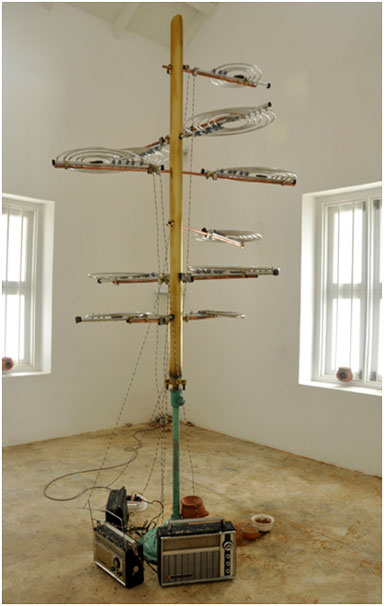 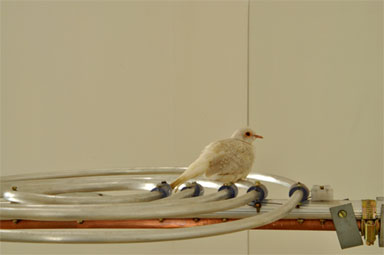 She was among the first Indian artists in Bombay to engage with installation and video art in an attempt to bring the audience into contact with the materiality of the issues that were being addressed. She believes, “The exigencies of certain societal conditions make you search for alternatives.” She consciously took to video art after the Babri Masjid demolition. She uses beauty in her art to seduce the viewer and not alienate him/her. It comes from her attempt to develop a visual culture in India she targets those masses that do not go to art galleries. Various artistic forms have influenced her including literature and theatre. She creates multi-layered narratives as her works include elements of traditional folk art, shadow play, kaleidoscope lantern and Kalighat paintings with divine images. 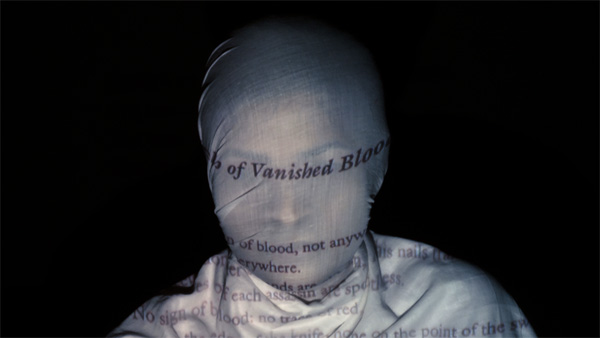 URBANSCREEN is an artist collective based in Germany working since 2005 with an interdisciplinary team of architects, musicians, scholars, technical specialists and media artists. Their practice involves site-specific media installations made for public spaces and include architectural projections, augmented sculptures, media façade concepts and virtual theatre. In the post digital revolution era, the collective is fascinated with the role technology plays in artistic expression. Experimenting with digital media and public spaces they raise questions surrounding the new principles of communication, lifestyle and art.

They have involved themselves with various projects that involve architectural projections on landmark buildings like the Sydney Opera House, Leopold Museum, and Rice University. While each projection works with a singular aim, the collective explores the artistic expression of an architectural space through these projections to establish an immediate, architectural expression.

Anish Kapoor is known for his experiential large scale installations, many of which appeal to a large audience base. Initially he worked with smaller installations and sculptural pieces until moving into his highly popular seminal work, but the use of textures and colour pigments has remained consistent throughout. The theatricality of Anish Kapoor’s art in the subsequent part of his career is based largely on his monumental sculptural installations. The effective nature of sculpture is derived from its materiality. And because Kapoor envisions the public and its relationship to space in his work, the effect gets multiplied to higher degrees.

Descension (2014), a water-vortex, follows from a language of form that the artist first began to explore in the work Descent into Limbo, exhibited at Documenta IX 1992, a cuboid building that contained a circular void in the floor descending into complete darkness.

Descension destabilizes our experience of the solidity of the ground we stand on. It builds on Kapoor’s concern with non-objects and with auto-generated form. In its state of flux and motion, Descension confronts us with a perpetual force and a downward pull into an unknowable interior.

In his project Orbit for the London Olympics 2012, Kapoor experiments with formal architecture to provide a sensation of instability, movement, and change to a tower. It is not a singular image but changes like the Tower of Babel, requiring real participation from the public.

Humans Since 1982 is a Stockholm based artist group, interested in arousing curiosity by creating material cues as to how the world can be seen and could have been. Best known for their clock groupings that come together to form numerals, they present clocks as “objects unleashed from a solely pragmatic existence.” Rejecting the pragmatism of technology, technology for technology’s sake, they invent new technology to present time, so that the viewer sees time change just like we waited for the bird to come out f a cuckoo clock.