Getting Across : Show Review - Artsome

Vadehra Art Gallery in collaboration with the Goethe-Institut / Max Mueller Bhavan is currently hosting ‘Getting Across’ featuring works by national and international artists.

‘Getting Across’ is a very timely and relevant curation of films, prints, images and powerful writings that facilitates a potpourri of a range of artists hailing from across distinct nationalities and ethnicities who may or may not be living presently in the country of birth but have experienced a sense of movement into a new land either personally or through observation of refuges percolating across international borders. The burning question today is that with concepts of globalization and a cosmopolitan scenario globally, do national boundaries earmarked by ethnic, religious and cultural dimensions still hold good or are they irrelevant?

The central theme of ‘Getting Across’ as the title suggests is all about the lines drawn across the borders of various countries that define territories of dwelling, occupation and culture but how meaningless they are in times of crises such as terrorism, lack of employment, poverty and other such issues as revealed by mass exodus of populations across borders of nations ripped apart by civil and military warfare such as Syria, Afghanistan, Iraq, Kosovo, Eritrea, Nigeria and the Ukraine, into safer European havens. Held earlier in 2016, Brexit further exposes the vulnerability of the European countries in their divisive stance on permitting or blocking these immigrants within their borders. ‘Getting Across’ addresses these issues of displacement, uprooting, memory and nostalgia for the homeland.

Artists who are showcasing their works at Vadehra  include:

Residing in Milan as an exile, Albanian born Adrian Paci’s work centres around longing for the homeland as an emigrant and portrays his sense of loss and yearning through media of painting, photography, and sculpture. 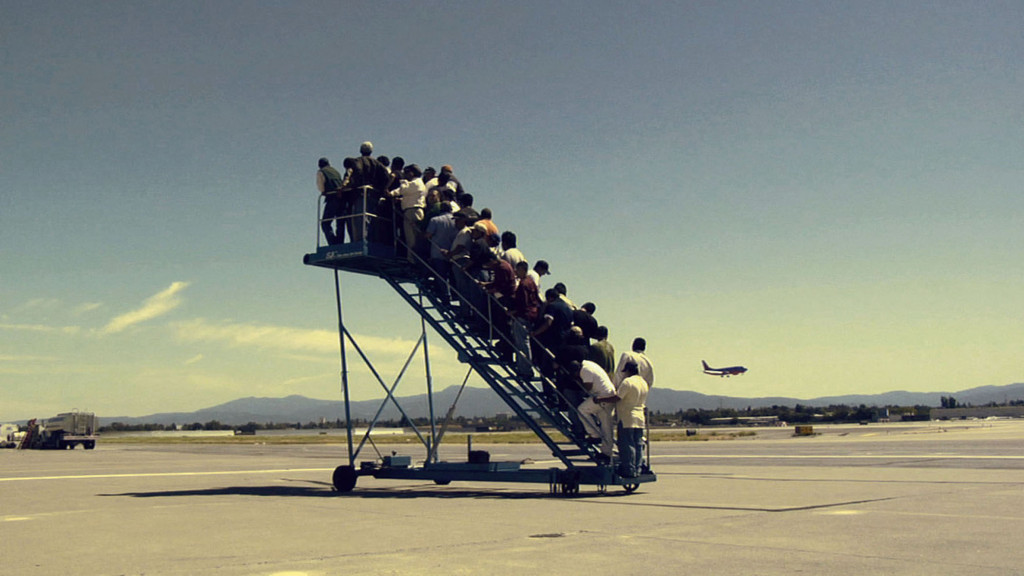 ‘Centre of Temporary Permanence, 2007’ is a Single-channel video projection as part of Vadehra’s display depicting hapless men and woman taking a flight of steps to nowhere.

Karachi-born Bani Abadi deploys the medium of video to convey her angst over matters pertaining to the India Pakistan partition in 1947, besides issues of diminished identity across international borders. 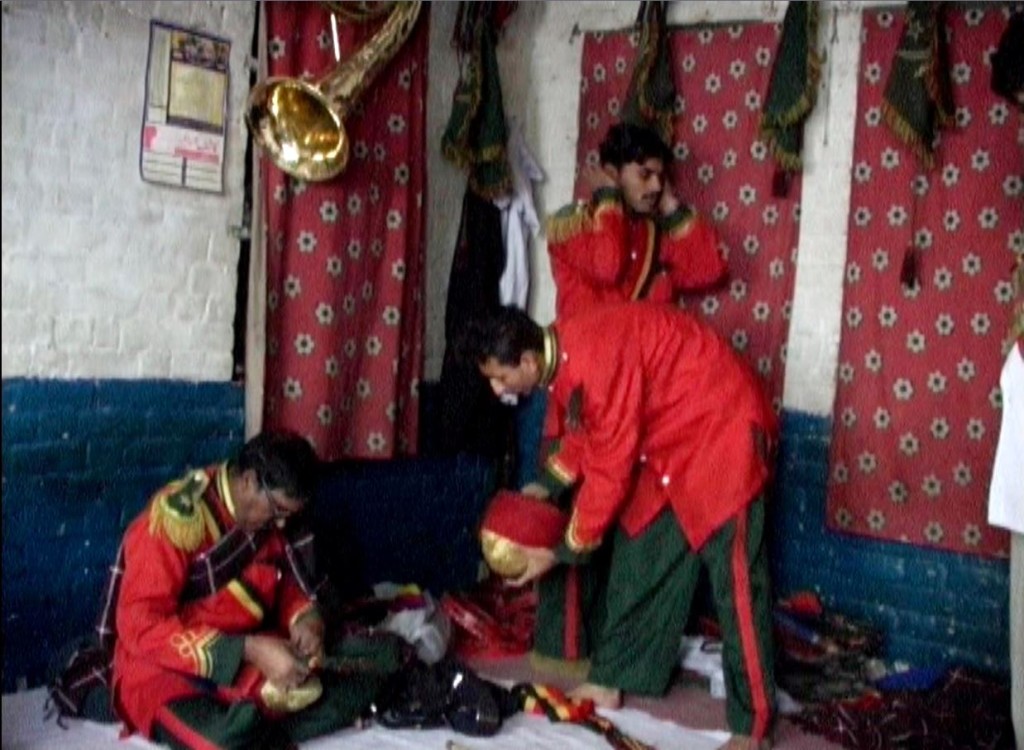 ‘Shan Pipe Band Learns the Star Spangled Banner, 2004’ is a Double channel video projection, conveying the artist’s “sense of anxiety and frustration in 2003, when the United States had attacked Iraq after having wreaked havoc in Afghanistan.” Shan Pipe Band is a recording of a music rehearsal by a brass pipe band from the old quarter in Lahore learning how to play The Star Spangled Banner and in a broader sense conveys Pakistan’s indecisive and precarious situation during that time with its neighbours and the USA.

‘Exercise in Redirecting Lines, 2010’ is a collage of inkjet prints striving to capture manmade lines and boundaries seemingly across nation states, thereby demarcating their personal territories.

The Belgian native Francis Alÿs was originally trained as an architect. His relocation to Mexico for work and residence inspired his near poetic, political sensibilities to react to everyday events, people and seemingly mundane tasks that reflect the reality geo-political and socio-cultural reality behind a community’s struggle to eke out a living and to go about the business of life.

His 2008 ‘Painting / Retoque, Paraiso, Panama,’ Single-channel video projection depicts the artist repainting a yellow-coloured road divider with his pail of paint and a handbrush whilst vehicles and humans go about their day-to-day activities. The observations through the artist’s eyes are also the viewer’s vision and they make for a compelling narrative.

In his 2005 Single-channel video projection ‘One Flew Over the Void (Bala Perdida)’ a rebellious procession of people held on the border of Tijuana and San Diego reflects pathos and exclusion across international boundaries. The film climaxes with a human cannonball being fired into the USA as a metaphor for defiance of political domination.

Conceived by Jeebesh Bagchi, Monica Narula and Shuddhabrata Sengupta in 1992, Raqs Media Collective is fluid as an entity, functioning as artists, curators, or even custodians of a social  philosophical conscience through their ouvre spanning across installations, video, sound, photography and text. 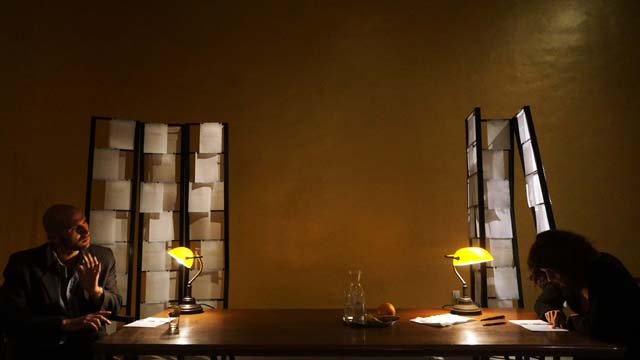 ‘Will You, Beloved Stranger?’ is a collation of Performance, Architecture and Text, which was first performed during ‘Host and Guest’, at the Tel Aviv Museum in May 2013. It is essentially a series of conversations between two individuals who speak English, but this is not their mother tongue as is clear from their heavy accents. Reflecting the denuding of cultural entity and the sense of no longer being part of a heritage or people or group upon displacement from one’s roots is heart-wrenching.

As the British writer-musician Michael Cox had stated, “The boundaries of this world are forever shifting – from day to night, joy to sorrow, love to hate, and from life itself to death; and who can say at what moment we may suddenly cross over the border, from one state of existence to another, like heat applied to some flammable substance? I have been given my own ever-changing margins, across which I move, continually and hungrily, like a migrating animal. Now civilized, now untamed; now responsive to decency and human concern, now viciously attuned to the darkest of desires.”

Apart from Vadehra Art Gallery, the exhibition will also be simultaneously running at Bikaner House and India International Centre (IIC), from September 1 – 15, 2016.

In tandem with the India International Centre (IIC), also organized are a series of talks will center on the idea of a country with defined borders in relation to its neighbourhood at a micro level and the world at large at a macro level. Featured Speakers: Aman Sethi (Delhi) | Mark Terkessidis (Berlin) | Aladin El-Mafaalani (Duisburg) | Vaiju Naravane (Delhi), among others.