In this interview with India’s foremost contemporary artist, Anjolie Ela Menon, we talk about the artist’s exhibition at Vadehra Art Gallery in Delhi, the first in the last five years. She talks about her long engagement with women in art and the condition of women in the country today. The interview takes a look at the artist’s routine and what goes into the making of a successful artist. We also talk about her views on contemporary art scene and the art market. 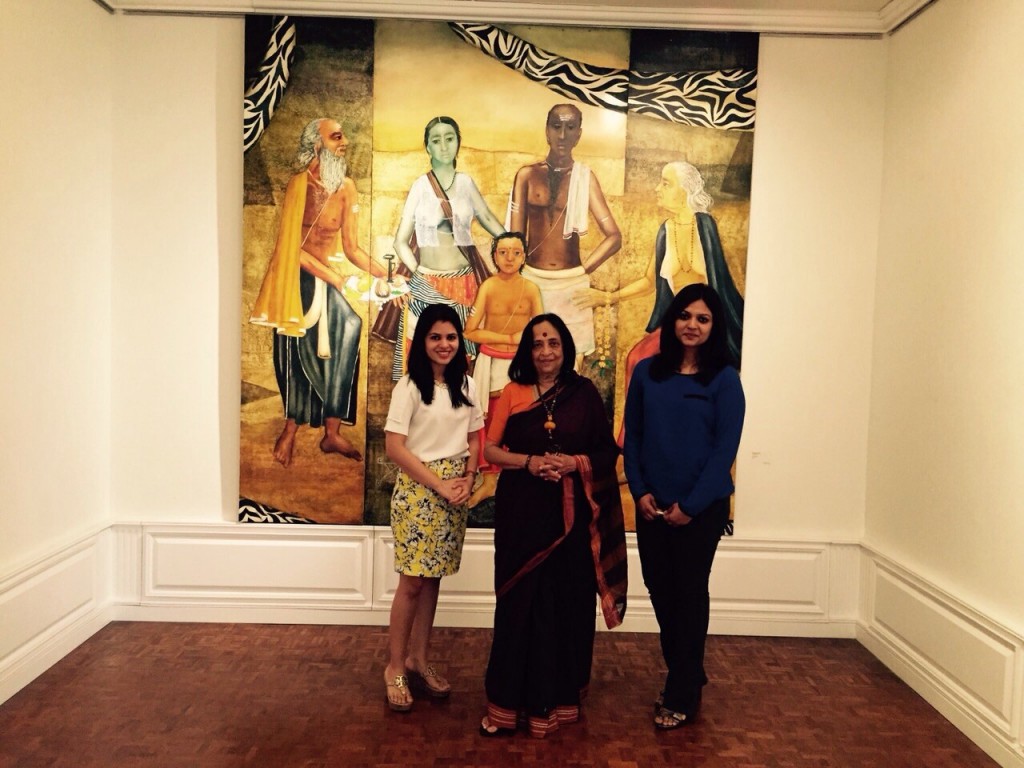 We have seen your work exhibited after a long time, 5 years! So first, what is the one artwork that really came together for you?

I like Parvati-Ganesh. For one, I mostly do a vertical format, and this is one of the first few times I’ve done a large horizontal format and there were certain problems with it and it was a challenge to tackle those. For example, to divide the horizontal space, you see how I finally divided it between the brown and the yellow. But the figures, swords and arrows cut that divide. And then I aspired to achieve some light and translucence that I think I’ve managed to achieve in this. 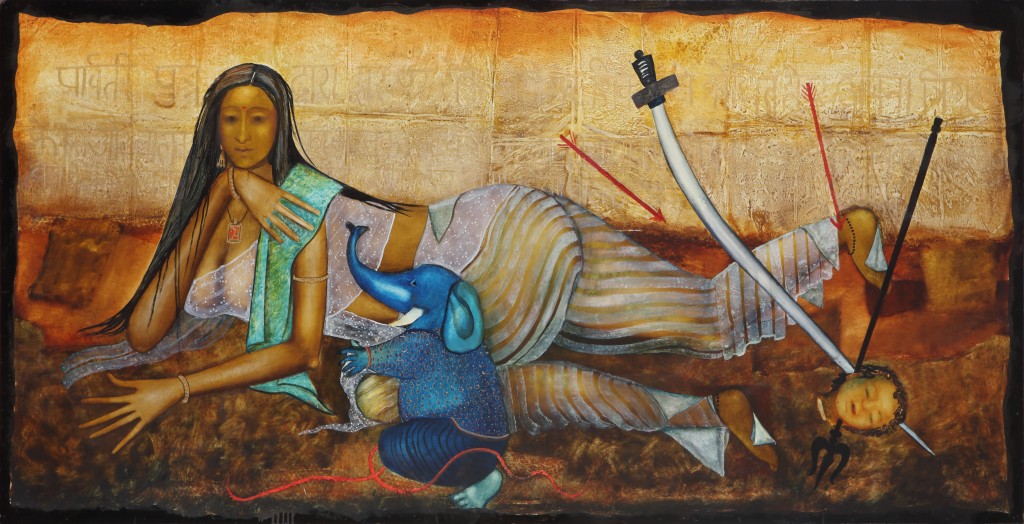 In this exhibition, we can see a number of paintings from the “Divine Mother” series. Can you tell us about the thought behind this series?

I think it’s a wonderful material for an artist. I’ve done Parvati and Ganesh; Yashoda- Krishna, Jesus- Mary. The place of the Divine Mother has always been important throughout history and it’s doubly important in the context of what’s happening today. There’s a dichotomy in the baffling events that have taken place in the recent past; on one hand we are the country that worships the Devi the most, be it Saraswati, Durga or Mary, and yet look at the way women are being treated today. So there doesn’t seem to be a coherent connection between belief and practice; women are definitely treated as lesser beings.

But these paintings also show a connection to the past that have led to the present situation, like in this painting (Parvati- Ganesh), Parvati has just experienced a terrible event (Shiva cutting the head of baby Ganesh) but her expression remains one of acceptance and this acceptance has dominated our discourse on gender for more than thousand years. But we see that now, finally, we have begun to rebel against that.

Looking at this work in 2015, it’s making me look back at a history and reflect on what is happening today accordingly. As an artist making a comment on society, what do you aim to achieve when you set out on such endeavors?

We all paint women of our times, people whom we see from day to day. I think we really need to question our mythology because it’s so much a part of people’s psyche (even today), in this case men’s psyche that what has been going on for ages, why not perpetuate it even further. Mythological themes have been the grist of a mill for many artists for a long time. I go back to Raja Ravi Varma who painted Gods and Goddesses in the garments of his own times. It’s the role of the artist to make manifest people’s idea of what god looks like. So as contemporary artists we try to tackle this too and we show it in our own way.

But using so many different colors and using colors to bring together people of diverse origins together in one single frame must invite a storm of interpretations. For example, for someone a blue figure may represent a deity, for others it may be a negative figure. So how do you define subject matter in your paintings and how do you deal with the interpretations?

Well, as an artist who puts their artwork in a public domain, you have to accept different interpretations. I’ve had some very absurd suggestions about my paintings in the past, very amusing ones too. I used to paint these distant landscapes through a window and a critic once said that while she was in Paris, she roamed free and now that she’s married, she’s trapped behind this window, gazing into the far horizon, longing to be free again. You have to accept all those interpretations, you know. In fact I find it very satisfying that often someone will find a synergy with one of my works. Someone might feel “That chair was in my grandmother’s house too” or “That child looks exactly like my baby”.

Talking about the “Basti” series and your long engagement with Delhi, can you shed some light on the differences you find between the Delhi that was and the Delhi that is?

Yeah. The Delhi that was, I was very lucky to be a part of that. I went to the University at Miranda House. Those days we used to ride horses down Akbar Road and ride bicycles. I was very lucky to grow in Lutyen’s Delhi- 5, Motilal Nehru Marg with 7 acres of garden around us. I feel we took that for granted at that time, to not realize how privileged we were. But I’ve always been more of an urban creature, I’m not happy at holidays, those idyllic places; I always feel it exerts me. There’s nothing happening there.

But your figures seem very quiet and still for somebody so fond of activity and movement. Why is that so?

Yes, that’s because my paintings were often influenced by early photography. My husband comes from Kollengode (Kerala) and after marriage when I visited Kerala, I saw in the palace some glass negatives of early photographs. From that I realized that in olden days, when there was an important event, it merited an important photograph, where everybody posed, stood still, there was a sense of gravitas and that really influenced my paintings. 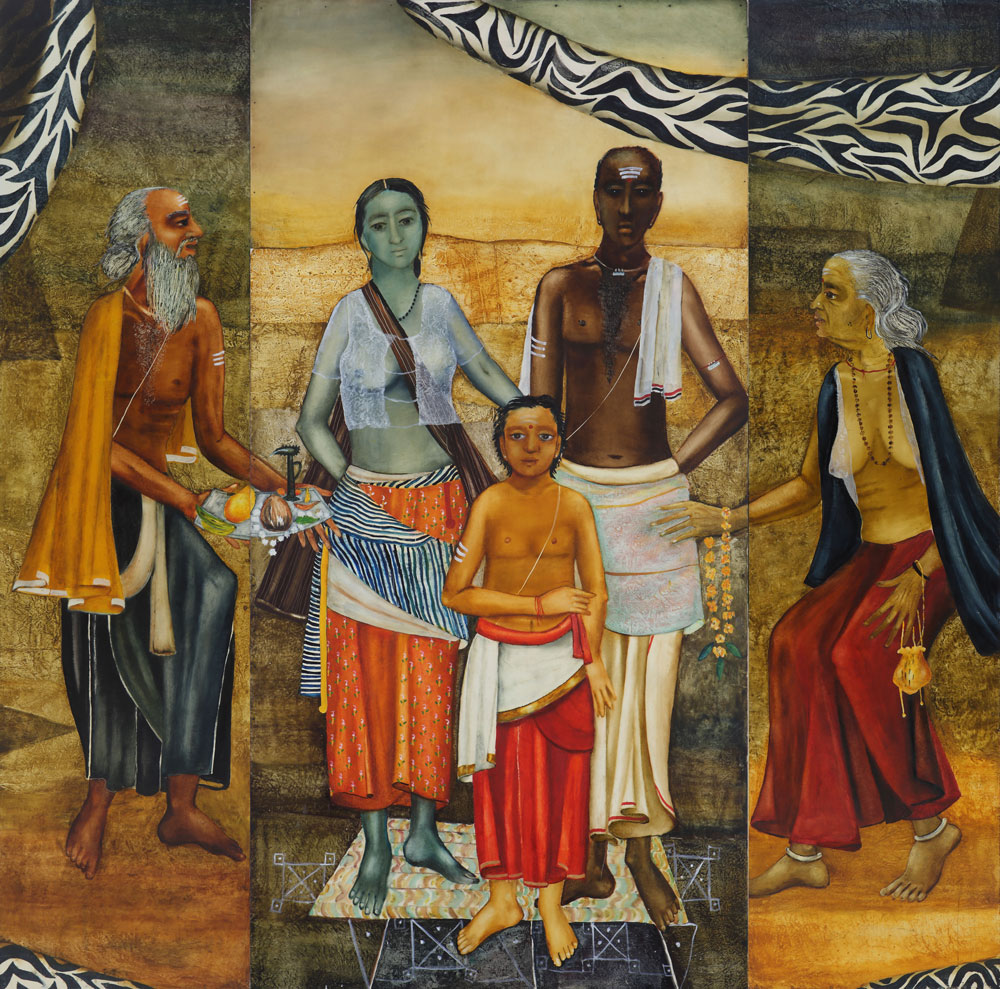 In many of your paintings, especially the “Window” series, we are able to see you in the paintings, as a voyeur and the protagonist. How do you manage to do that?

I like the feeling of being a voyeur. I used to share that a lot with Bhupen Khakhar. He used to love to go sit in a park, meet some completely strange fellow and then persuade him to take him along and so he could see how another person was living. I mean it’s dreamlike.

I used to go to Lakad Bazaar to look for old windows and one day the car dropped me in the wrong gully and that was the gully of the red light area. But I did a whole series of works on it. So this was kind of a happy accident that emerges from exploration. 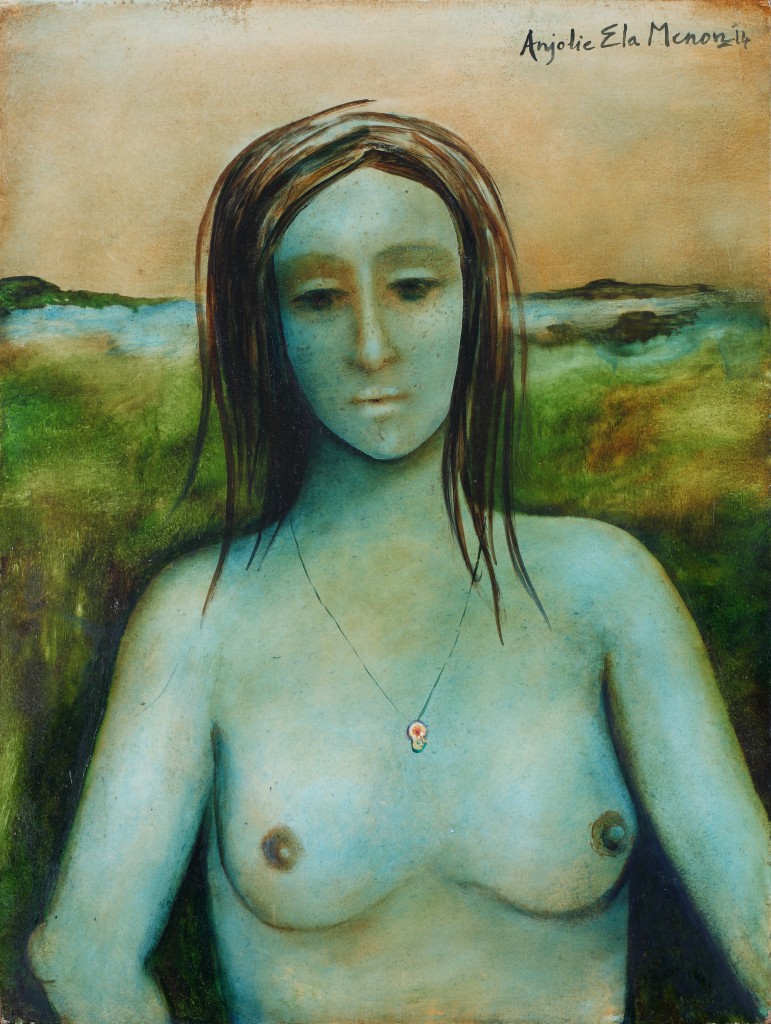 I would now like to talk a bit about painting as a medium of art. You’ve had series of works where you used found objects and kitsch and old windows, but painting has always been your mainstay. Why is that?

I’ve just always loved to paint. I feel art is all about trying to create an image and you can create an image by any means, so whether you’re going cover yourself in colour and roll on the canvas, or use sticks and stones or Photoshop, it doesn’t matter how you achieve that image. But for me, painting in oils has always been my first love. There’s detail, there’s structure, there’s color and a certain mood that you can only create with oils.

So talking about your routine, would you describe yourself as a 9-5 artist?

Actually I am a 10-3 artist. I work on several paintings at a time because each layer takes time to dry. I use these very thin pigments and each layer has to dry before I can go on to the next. But I do go to the studio everyday because one’s life is so full of events, children, grand children, and friends, but when I go to the studio, that’s my time, it’s absolutely my time.

Can you tell us more about the next project that you’re working on now?

I’m collaborating with an Australian photographer for the Mumbai airport. We’re doing huge panels where the photographs look like paintings and the paintings look like photographs. You have Rajiv Sethi’s huge doors and there’s translucence in the paintings so you’re seeing the paintings through those doors. At the airport, you don’t want something gloomy because the visitor’s shouldn’t be like ‘oh my God, I’m going to crash’ but it needs to have a sense of joviality, with some significance.

Of course the role of the artist has changed. Earlier the role of an artist was like that of a Shaman, to make manifest the ideas of God. And most of all the patronage has changed. First it was religious institutions, then the merchants came in and all they really wanted was hagiographic images, the portraits of themselves and their families. And then patronage shifted to royalty, you had the great art of the Mughals. Now the great patrons, I think are the airports, the hotels, where you can do large scale projects. The corporations, in the early days the people who bought our works were the Taj and TATA which gave us big walls to paint on.

We’ve talked about Delhi and living in Delhi, but how was it different being an artist then compared to now? Because I think we see a lot more people interested in art, taking up art as a career, going abroad to study art and spending money on art education, there are more galleries and institutions, but what was the art scene like when you first started off?

No, but I have to say, there’s still not enough to go around. When I was a young artist, we were just 200-300 of us painting. And that might be the reason for my so-called ‘success’. Now, there are 6 Lakh young artists, each one looking for a place under the sun and there are only so many galleries, buyers and critics. So there is a huge attrition when they come out of the art schools. A few might be able to establish their signature, might be able to, but for the rest, I believe it’s a very bleak future. Lalit Kala Akademi is there, a few other government institutions are there, but overall the patronage is less now.

Do you have a suggestion or a strategy to follow for the young aspiring artists in India today?

I would just say that like in my case, I was just driven to paint. My father wanted me to be a doctor; my mother wanted me to be a writer. I ended up painting, but I think there are many youngsters today who have chosen to go into art for the wrong reasons, that is, that it would be a big money spinner. It’s not true anymore, so they would be in for a rude shock.

I also feel that the new art, especially the installations, they need not only patronage once it’s been made, but to make them in the first place. Some of the installations and exhibitions that we see today are so shabby, they’ve been made with sticks and stones that they look more like assemblages than installations because to make a good installation, it requires money.

Whereas the great installations that you see abroad, I saw one in MOMA, by Nancy Stockland, it was in 6 rooms going all the way into the river, wonderful installation. The museum paid her $6 million to make the installation and that makes all the difference. So I don’t know where the patronage is coming from, I mean there are a few organizations like Khoj and all that are promoting great art. But it’s not enough.