Jahangir Sabavala : A Painter and Gentleman

A splendidly curled Dali-esque moustache, three-piece suits, sporting cravats with some wit, grace and old world charm, Jehangir Sabavala was famous for all the right reasons. The epitome of charm, civility and grace, he was what could have been described as a charming mixture of chivalrous and perfect gentleman.

Growing up in a highly intellectual environment of Mumbai’s Parsi aristocracy, he was one of the most expertly trained, well-traveled and accomplished painters of his generation.

His first solo exhibition organized by M.F.Hussain at the Taj Mahal Hotel, Bombay in 1951 was a simple and elegant start to an artistic career that would span more than half a century.

Known to practice the modernist style with a deep classical influence, Sabavala’s work often helps see the world through a kaleidoscope; figures and forms angle their way out of wedges of colour with every line and geometric plane in perfect balance to form vast, tranquil scenes.

His initial work was a mixture of clever illusions surrounding cubism and the mystique of impressionism. Sabavala’s style was unique but the obvious European influences made him less exciting to many as at the time Indian Contemporary Art was going through an increasingly experimental phase. Despite the turbulent times in the aftermath of Independence/Partition he made his own place in the art-world and chose to stay away from groups and cliques.

Sabavala wanted his art to depict his diverse lineage yet open vistas of reverie and meditative silence. The human form played a very miniscule part on the canvas; the figures were veiled in silence, enveloped in solitude, distanced from the viewer and mostly shown as pilgrims and wanderers. His oeuvre underwent a significant change and he began to create serene landscapes and seascapes- mountains masked with mist, land locked with seas and masses of clouds filled with a mystic aura. He skillfully handled the transparency of water creating a soothing effect with shrouded light, subtle colouring and middle tones.


These landscapes that went on to be his signature style for ages were always fluid, free and mesmerizing. He worked with soft, muted, colour palette of browns, ochres and reds, with the work being enigmatic yet devoid of superfluous details.

Later on skyscrapers and cityscapes dominated his canvas.

The cautious and brittle lines in his early works like Sails on a Blue Day, gave way to a more mature representation to precise artistry.Some of his famous works The Star That Beckons merges the sea, sand and sky in a way to give the canvas an illusory sense of depth that reveals his mastery over light, colour and texture.Vespers I depicts his fascination with the monastic life. A group of nuns in a ruined chapel, gathered in prayer, the figures are barely distinguishable as separate individuals and shown as representation of seclusion and renunciation. In Cobweb Cloud, he spun a delicate web of clouds across the canvas making them look both trapped and released at the same time.

His inclination to nature can be seen in Of Cliff and Fall. Birds have also recurred in painting such as The Predator, Under the Shadow VI and Riding the Thermals. The Friendly Shepherds, comprised of fragments of his Cubist leanings, stands for poise and exhibits intense streaks of contradictions and creativity.

Jehangir was awarded the Padma Shri by the Government of India in 1977 and the Lalit kala Ratna by the President of India in 2007. Three monographs on the artist are published by eminent art publishers and a Film based on his life ‘Colors of Absence’, won the National Award in 1994. 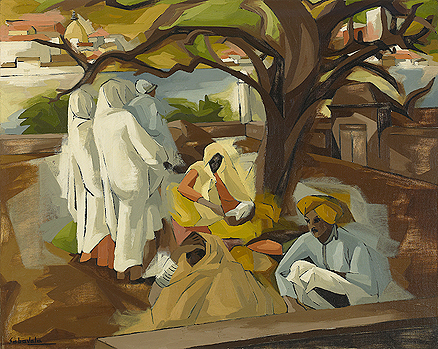