KMB 2014 Focus: Mapping the Ephemeral and the Material

Evanescent aspects like memory, fantasies, perceptions and feelings are never apart from our material reality of streets, landscapes, and buildings. When artists combine the ephemeral with our physical reality in artistic processes of map-making and remaking, they express the personal and collective concerns of a community or society. They map the world through the difficult process of mapping ephemeral realities. The elusive task that each artist undertakes to express the external through the interior comes to be foregrounded when they articulate their concerns through cartography. These artists exhibiting at the Kochi-Muziris Biennale 2014 use cartographic knowledge or devices to raise concerns particularly relevant in this age of globalisation. 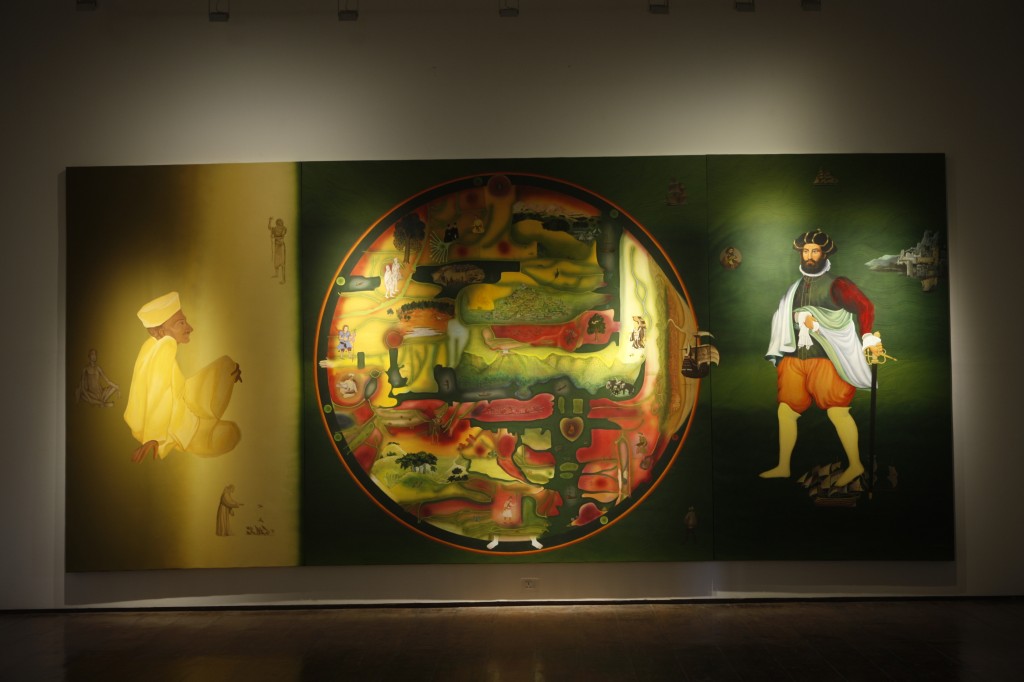 One of India’s leading artists as well as a writer and pedagogue, Gulammohammed Sheikh is known for weaving into his works layers of references drawn from literature, art history, politics and autobiography.

Gandhi and Gama (2014) is a triptych that imagines a confrontation across centuries between two key protagonists in the story of colonialism in India. In it, Vasco da Gama, whose arrival in Malabar in the 15th century inaugurated the European scramble for India, looks across a mappa mundi (a medieval hand-drawn map of the world) at a young Mohandas Karamchand Gandhi contemplating the demise of the British Raj in the 20th century.

The mappa mundi is a recurrent motif in Sheikh’s works. In several paintings, he has used a combination of digital collage and painting to rework these medieval European imaginings of the world by incorporating elements drawn from India. 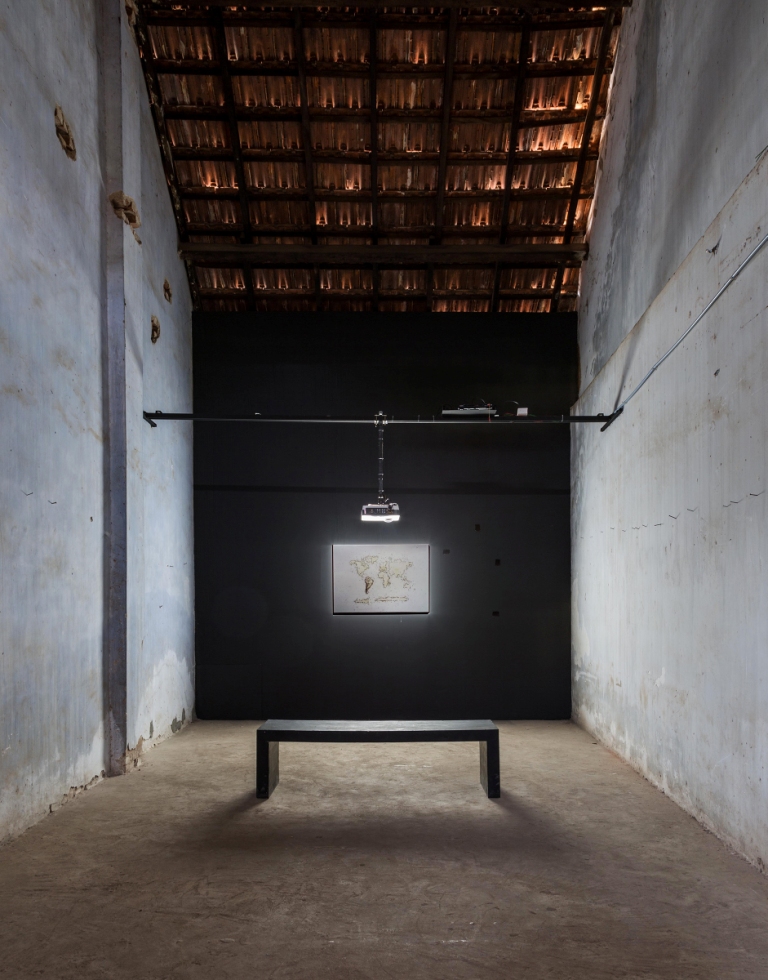 Rivane Neuenschwander takes manmade systems for organising knowledge, such as maps or language, and exposes them to seemingly random machinations of nature.  Cartographic themes find expression in Neuenschwander’s works such as Carta Faminta (Starving Letter) (2000) and Pangea’s Diaries (2008).

In Contingent (2008), exhibited at the Biennale, Neuenschwander fashions a map of the world in honey and then unleashes an army of ants on it. As the ants frantically consume the honey, the continents shift shape and slowly disappear. This transformation of the map through the chaotic and (to us) completely random feeding choices of clusters of ants is captured in a time-lapse video, in a style reminiscent of natural history presentations. The video becomes the artist’s deconstructed vision of the many accidental movements, both manmade and natural, that have shaped (and continue to shape) the contours of our world.

Contingent destabilises the certainty of cartographic constructs and rewinds to an age of voyages and discoveries when maps shifted and changed as ships crisscrossed the seas and disembarked at unknown lands. Simultaneously, it captures the present moment of accelerated globalisation and consumption of resources, characterised by migration and the porous, unstable nature of boundaries and identities.

Three decimal points, Of a minute, Of a second, Of a degree (2014) is a multi-part, immersive installation which doubles as an abstract, quasiphilosophical meditation on geometry, time, materiality, cartography and a triangle as the embodiment of contradictions. Composed of a series of suspended objects Kher calls ‘single points of contact’—triangles inside each of which swings a pendulum, seemingly unstable but never collapsing—the installation is: “A mobile that seeks to undervalue everything that is not abstruse. It is a point that marks the place and time and coordinates of where the world can stand still for a second of a minute of a degree. By both confronting and accepting gravitational forces, all objects can find their perfect equilibrium, poise and meaning.”

In her research, Kher was drawn to several references: The Penrose triangle as a visually fulfilled object that can never be resolved in three dimensions, astronomical charts by the medieval scholar AlBiruni (973-1052 CE) and the 1400-year-old quest to determine the true shape of the earth which in the 19th century returned to India in the form of the triangulation survey of the meridian arc that runs from South India to Nepal and East to the Western Ghats.

One of many parallel geodetic quests, the ‘Great Triangulation Survey of India’ became one aspect of the colonial project through which India’s rivers, mountains and plains were meticulously measured for their worth to the Empire. In Kochi, the artist found one of its remnants, the mortar of a 60-feet-high survey tower from which a Banyan tree now grows.

Reflecting on the project, Kher writes: “Hundreds of men died, scores of elephants would move a mountain and then raze tree cover in a matter of weeks. Tea was served at 4. All perfectly mad. The survey maps are beautiful.”

French-Swiss artist Julian Charrière’s works explore changing perceptions of time and space in a world accelerated and flattened by globalisation; often investigating ways in which the virtual world dictates our experience of the ‘real’.

Charrière’s exhibit at the Kochi-Muziris Biennale 2014 is linked to an earlier project, Monument – Sedimentation of Floating World (2013), for which he collected mineral samples from all recognised nations in the world. He mixed these with cement to cast a pillar, pinning down into a ‘concrete’ form nations and cultures that often exist for his audience only as floating entities in a virtual world. Leftover mineral samples from this project were used to make ‘international sandpaper’, with which the artist scraped the surfaces of 13 found globes manufactured between 1890 and 2011, creating smooth spheres shorn of all markings. Charrière’s installation at the biennale, We Are All Astronauts (2013), consists of these globes hung over a table on which are scattered the sandpapered remnants of their surfaces.

The artist’s act of erasure mirrors the flattening of boundaries and differences that characterises the age we live in. It simultaneously evokes natural processes ever at work, constantly reshaping the contours of the world.

Playful yet incisive, Kwan Sheung Chi’s work is heavily defined by the liberal economic and political set up that is the autonomous and prosperous city-state, Hong Kong. A flourishing coastal trading town for centuries, Hong Kong, much like Kochi, was one of the places where early European traders from Portugal established themselves. Since then, it has witnessed a flurry of regime changes, culminating in the establishment of Chinese rule in 1997 ending more than 100 years of British domination. Post-1997, while its institutions continue to remain heavily anglicised, Hong Kong has attempted to negotiate for itself an identity and a place within the iron grasp of Chinese sovereignty. This search for self figures prominently in Sheung Chi’s work.

Hong Kong (2012) is made of a paper-cut globe with only a map of Hong Kong printed on it. Beside it are posters with the same map that viewers can take home and assemble into globes themselves.

Swiss artist Marie Velardie’s works are intimately connected to time and explore the links that bind humanity’s past and present to the future. She often works like an archivist, assembling projections drawn from science and popular culture to create a ‘memory of the future’.

Atlas des îles perdues (The atlas of lost islands) (2007) by Marie Velardie seeks a dialogue on the fate of scores of inhabited islands across the world that face submergence due to rising seas. The installation consists of ink drawings Velardie made of many such sinking islands, among them Minicoy in The Lakshadweep and the many islets that form The Maldives, both situated off the coast of Kerala. These are arranged in a rough geographic order on the walls of a gallery converted into an open globe by plotting meridians along its length. In the middle is situated Velardie’s Atlas des îles perdues, a bound volume from the future containing all the drawings. Its cover announces the date of its release: 2107, by when all the islands it lists would have disappeared under the sea.