The Palestinian artist, Mona Hatoum, who lives and works in London and Berlin, has two works at the biennale: Undercurrent in Aspinwall and Routes AP in Durbar Hall, in the city. Through the decades, Hatoum has revisited some common themes using different materials and modes, and furniture and cartography have been recurring motifs; Undercurrent comes under the former, while the Durbar Hall work falls under the latter category.

Cartographic themes find expression in a large number of works by Mona Hatoum. Born to exiled Palestinian parents in Beirut, Lebanon, Hatoum was in the UK when a civil war broke out in Lebanon, preventing her return. It is perhaps her experience as an exile that prompts Hatoum’s interest in the relationship between power and cartographic constructions of space.

In 1996, during a visit to Jerusalem, she made Present Tense (1996) an installation made of locally produced soap bars on which Hatoum etched with red beads the fragmented map of Palestine drawn up under the Oslo accord. Maps recur in several of Hatoum’s works, such as Hot Spot (2006), where she outlined continents on a steel globe using neon tubes that glowed like heated wires, or Projection (2006), a deceptively simple map of the world made on off-white cotton that follows Peters Projection–a controversial representation of continental masses that rejects the traditional world map with its inflated Northern Hemisphere.

Exhibited at the Biennale, Routes AP (2003) is a playful intervention on maps found in in-flight magazines. For these drawings, Hatoum filled with colour the spaces that lie between lines denoting aircraft movement. The resultant mesh resembles a complex climatic map that disrupts national boundaries and liberates the landscape. 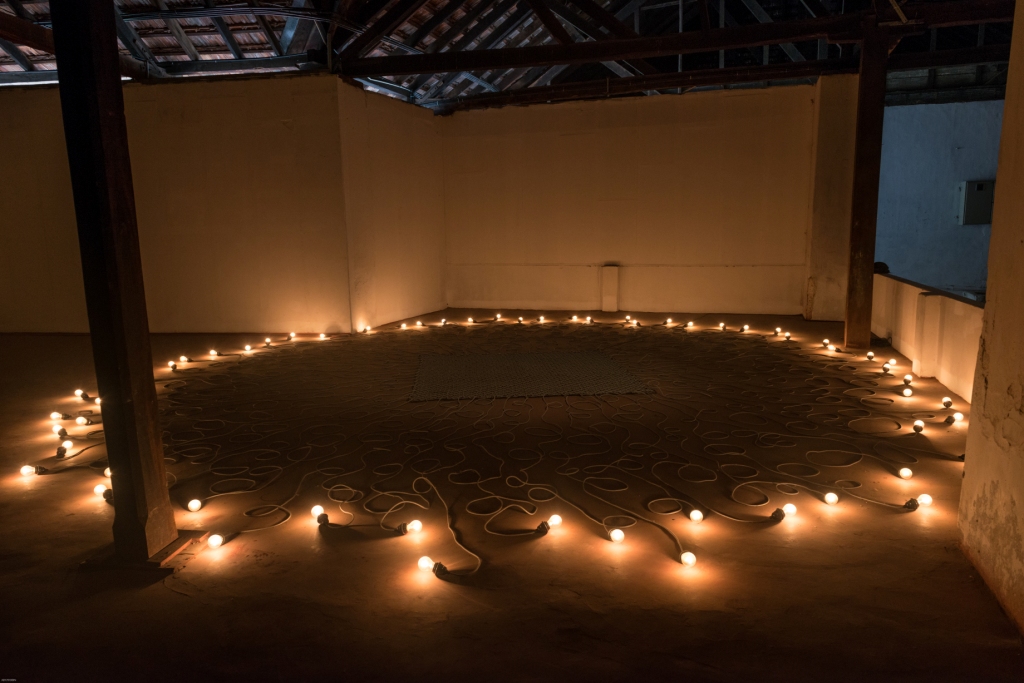 In Mona Hatoum’s hands, seemingly innocuous objects like light bulbs, toys or even a wheelchair can acquire strange and threatening dimensions. Her intensely visceral sculptures, installations and videos work within a dynamic of conflict both within their form—minimalist yet surreal—and in the emotions they arouse in the viewer.

While the experience of exile inevitably colours her perception of the world, her works, though political and feminist in a distinctly poetic way, rarely refer explicitly to specific geographies of conflict. Instead, she leads viewers into the violent subtexts of our world through an experience of the uncanny. The seductive visual and corporeal impact of Hatoum’s works often reels in the viewers before their conscious minds can make meanings out of them–before language takes over.

Exhibited at the Kochi-Muziris Biennale 2014, Undercurrent (2004) is a circular arrangement of light bulbs and interwoven wires on the floor. The throbbing lights warn of danger —of landmines perhaps, or snaking streams of lava— yet are irresistible in their allure. The bulbs brighten and fade with the rhythm of a viewers’ breath; their pulsating motion seeming to encapsulate the mysterious ebbs and flows of the universe in perpetual motion.