There is a certain a-temporality, a timelessness that we associate with paintings. Since time immemorial, from Neanderthal to the 21st century computer geek, humans have expressed themselves through painting. But with contemporaneity comes new form, new content, a building of the new on the edifice of the old. The old is hardly ever rejected but challenged to include newer forms of expression. Here is a list of artists exhibiting at KMB-2014 who from questioning the rectangular limitations of the canvas to innovating techniques create new modes of painting.

Lives and works in Colombo and London, UK. 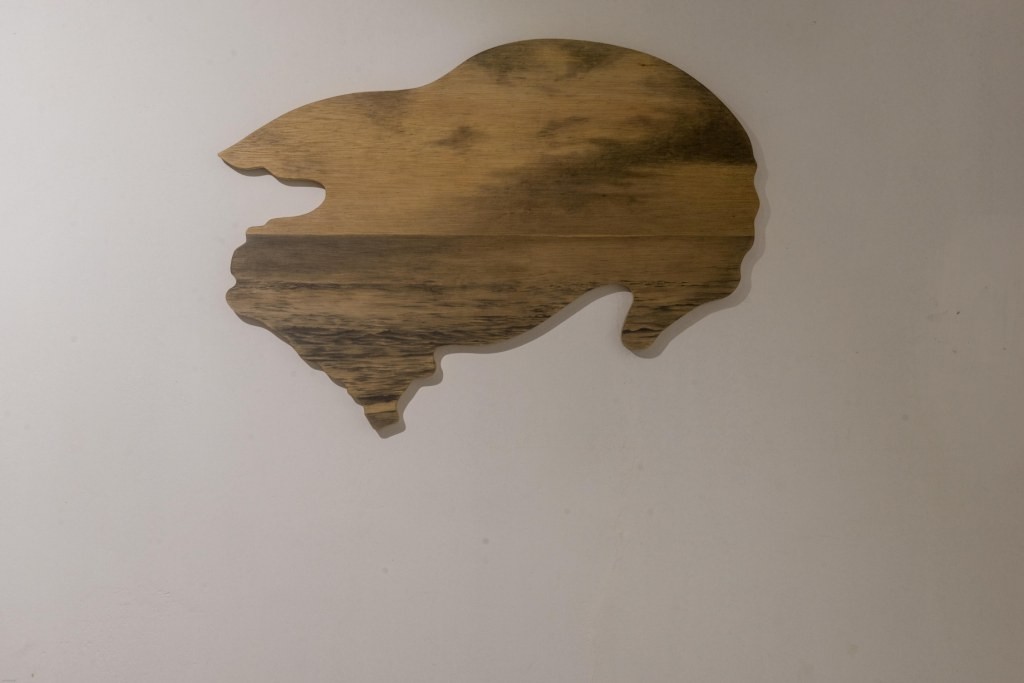 In Muhanned Cader’s works, landscapes are freed from the rectangular frames within which they are usually imprisoned. As he explains, like cartography, the rigid framing associated with the western art genre we know as landscape painting is ideologically linked to colonial era efforts to order and conquer distant lands and people. In Cader’s works, landscapes take a myriad of alternative shapes, often forming slivers of sea and sky that simultaneously penetrate and float over the surfaces on which they are painted. Inspiration for this comes from a range of sources: From the shape of found objects to what he imagines was the first frame through which man perceived the world– the mouth of a cave. In the installation Galle Fort; Fort Kochi (2014), Cader once again breaks the conventional rectangular frame, a process he describes as an allegory for the rejection of fixed notions of identity. Made with graphite on wood, these works employ a range of images and shapes that the artist encountered on the coast of Kochi. According to Cader, turbulent ocean surfaces being indistinguishably similar, the Arabian Sea he saw in Kochi merged in his mind with familiar seascapes such as that of the historic Galle Fort area in Sri Lanka where his family hails from. Inspired by this ambivalence, Cader in these landscapes frees identity from notions of fixity linked to land. Instead, he envisions a fluid, ever-changing merger of land, identity and history

Lives and works in Mysuru. 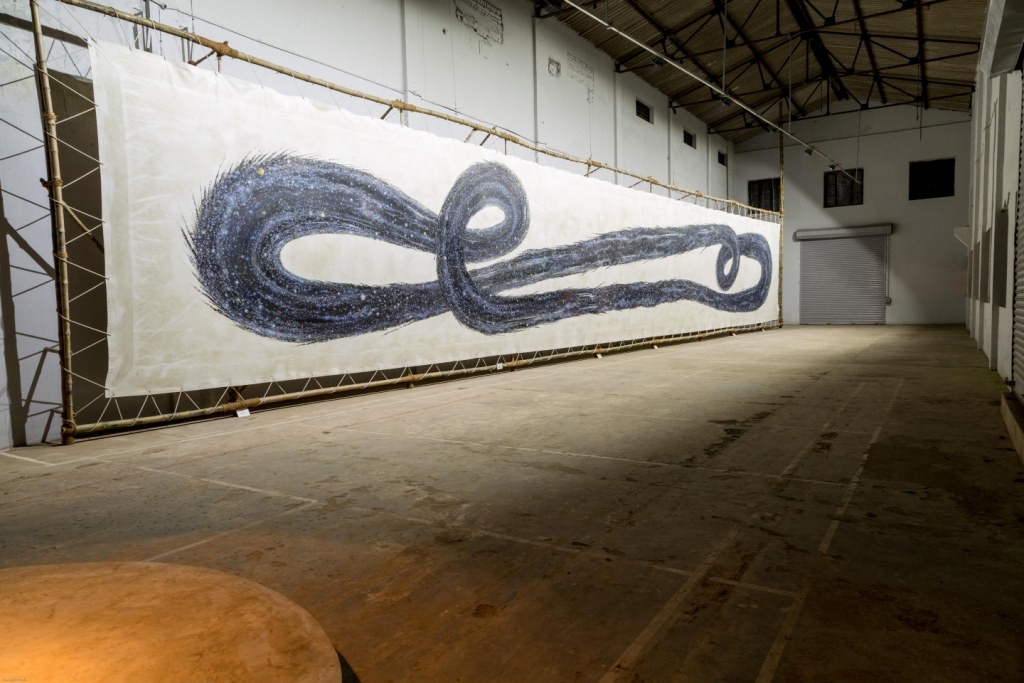 In his exquisitely detailed paintings and installations, N S Harsha revels in panoramic views of the world. Livened by the empathy and wit with which they are rendered, his canvases often depict what the artist likes to call ‘bird’s-eye views’—of people, places and ways of living and laboring— and form tiny universes unto themselves. They often bring together a multitude of human figures that eat, sleep, marry and fidget about in a series of paintings, whether on canvas or sprawled on floors or walls. Among them are: We Come, We Eat and We Sleep (1999-2000), Mass Marriage (2003) and Cosmic Orphans (2006, site-specific painting at Sri Krishna Temple, Singapore Biennale). Punarapi Jananam Punarapi Maranam (Again Birth, Again Death) (2013) is a panoramic view of the universe presented as an infinite loop. It takes its title from a Sanskrit hymn on the endless cycle of birth and death and shows a swirling galaxy of stars dotted with images of the planets of the solar system, all caught in a never-ending procession through space and time. According to the artist, this 79-feet abstract painting began as a large doodle of the universe capturing its deep voids. The enormity of the painting necessitates a walk along its length that reveals from multiple perspectives the luminosity and complexity of an unfathomable universe

Lives and works in Chennai, India. 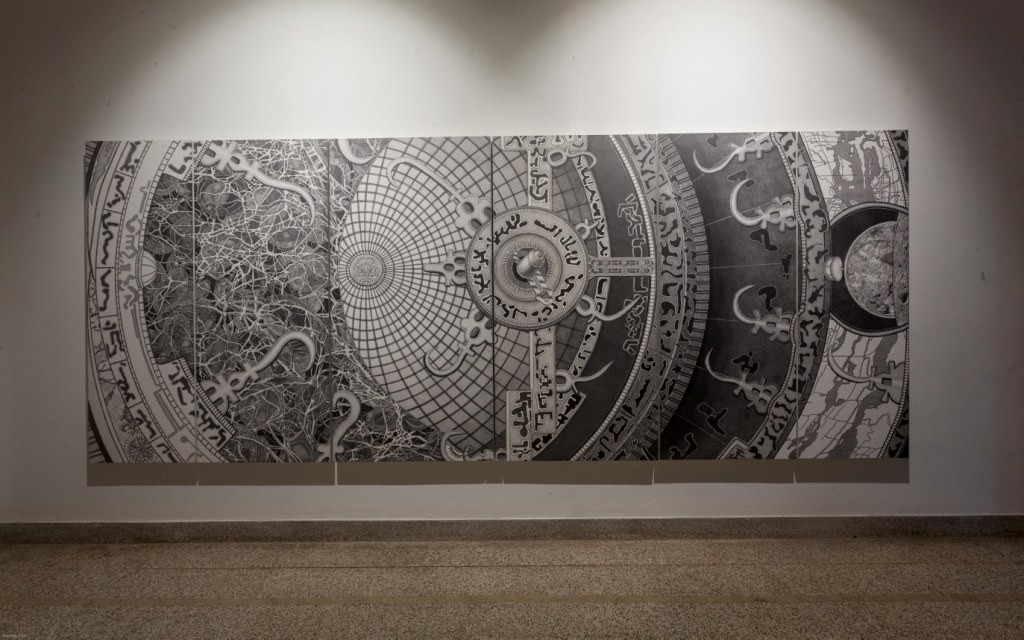 Parvathi Nayar’s works are hyper-real yet abstract portraits of the world. She often deploys ‘objective’ Scientific imagery, such as that derived from microscopes or satellite cameras, to create works that defer interpretation with their plays on perspective and scale. Nayar’s ideas are usually realised as intricate black and white imagery that is hand-drawn on wooden surfaces. According to her, “The starting point of these explorations is the dot, the punctum (the point), whose endless iterations, in a cosmic and painterly sense, give rise to the world of the art work.” The Fluidity of Horizons (2014) is an interconnected suite of drawings and a sound installation that makes references to the history of the Malabar Coast, shaped as it has been by a long history of travel and trade. One of the drawings is inspired by the form of an astrolabe– a device once used by astronomers and navigators to determine time and the position of the Sun and other celestial bodies. Nayar has mapped onto the body of this navigational instrument several interconnected geographies of our life, from ancient imaginings of the world to the minute pathways inside a cell. Also presented is a triptych that carries echoes of a time when the lure of spices led voyagers from across the world to the coast of Kerala. The attractions the coast held and the contact and confrontation that ensued are captured here by the figure of a giant pepper corn looming over the Arabian Sea, an object simultaneously of danger and intrigue. Punctuating this pictorial narrative are other elements; among them a mysterious whorled shell and a drawing plotting the path of subatomic particles. Together, these images lead audiences into contemplative, meditative and curious positions of viewing the world.

Lives and works in Sydney, Australia. 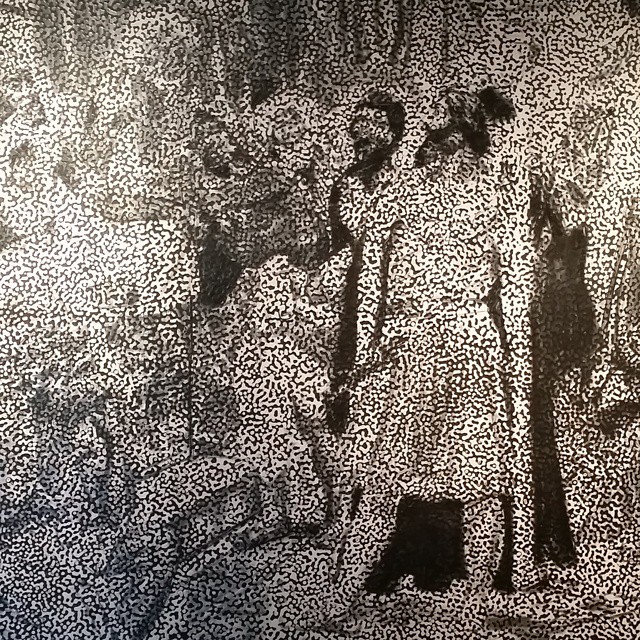 A recurring motif in the works of Daniel Boyd, an Australian artist of aboriginal ancestry, are resin dots that he lays over a painted image before painting the whole surface in black. This creates a constellation of ‘lenses’ revealing parts of the underlying image. According to Boyd, Gestaltism’s ‘Law of Closure’ about the human mind’s tendency to fill gaps in a given set of information to perceive a whole, and its central principle, “the whole is other than the sum of its parts,” are useful in reading his paintings. In a suite of works titled History is Made at Night (Kochi) (2014) that he has created for the Biennale, Boyd refers to four images that trigger questions and connections that animate and undo dominant narratives surrounding the ‘Age of Discovery’. Untitled (ZVC) is based on the engraving of an 1898 Portuguese painting depicting Vasco da Gama’s meeting with the Zamorin of Calicut. The diptych made up of Untitled (KC) 1 and Untitled (KC) 2 shows 11th century gold coins of the Kilwa Sultanate in East Africa that were recovered along with coins of the Dutch East India Company from Marchinbar Islands in Northern Australia. As Boyd points out, Gama had extorted a tribute of gold coins from the King of Kilwa while en route to the Malabar Coast on his second voyage. The coins thus form a possible link that connects India’s Western Coast to the indigenous Yolngu people of Northern Australia through the transactional network of colonialism. Untitled (SC) and Untitled (PSM) are linked by their celestial references. The latter shows a traditional Polynesian navigational star map while the former refers to a 1906 photograph by J W Beattie of the Anglican missionary vessel ‘Southern Cross’. The name Southern Cross has multiple associations, from a constellation to the Christian Crucifix and the Australian National flag.