For over 180 years from the early meetings of Photographic Society of London the question “is photography art?” has been asked. Always seen as too literal and lacking in imagination to be art, photography has occupied a difficult space. In recent years the frequency of the question has decreased as artists have constantly challenged it by using this medium to capture the world around them in that instant or carefully staging it. Here is a look at the artists at the KMB who have used this medium. 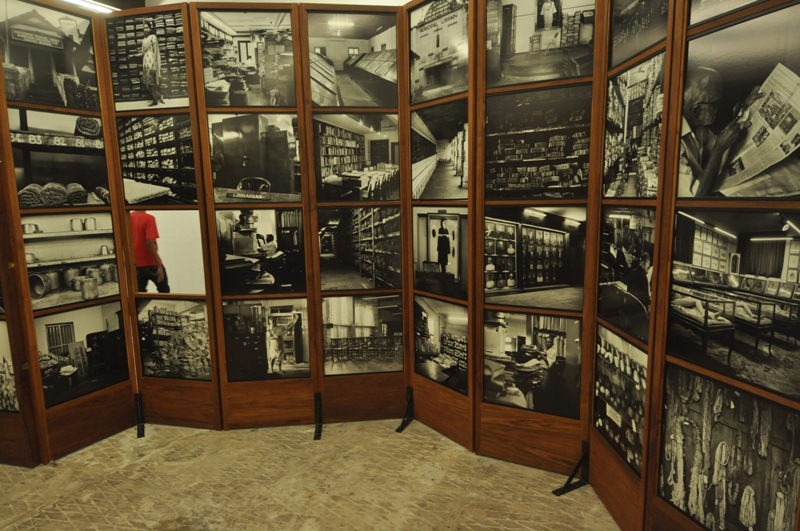 Dayanita Singh’s 1.9.2014 Dear Mr. Walter (2014) is a year’s work presented as a series of interconnected movements in life and thought, built into eleven pillars of varying size and a few stand-alone images.

The pillars choreograph the viewers’ encounter and engagement by reinventing the space of photography as sculpture and architecture. They suggest structures of interconnectedness that exist as much in the intangible life of inwardness or inspiration as in actual space. Each pillar is built around informing or founding presences in the life of the artist that are hidden as well as manifest; their existence often realised in the process of bringing them into relation with one another during editing and sequencing.

In this process, the role of chance is crucial and manifold. In it, Singh’s preoccupation is with showing the vehicles through which chance operates in a web of human lives. It is when the loss of a beloved friend coincides with the beginning of a new conversation; renewed encounters with a person, place or kind of architecture reveal unexpected patterns of recurrence or change, the hand of chance gestures towards the possibilities of a new form. 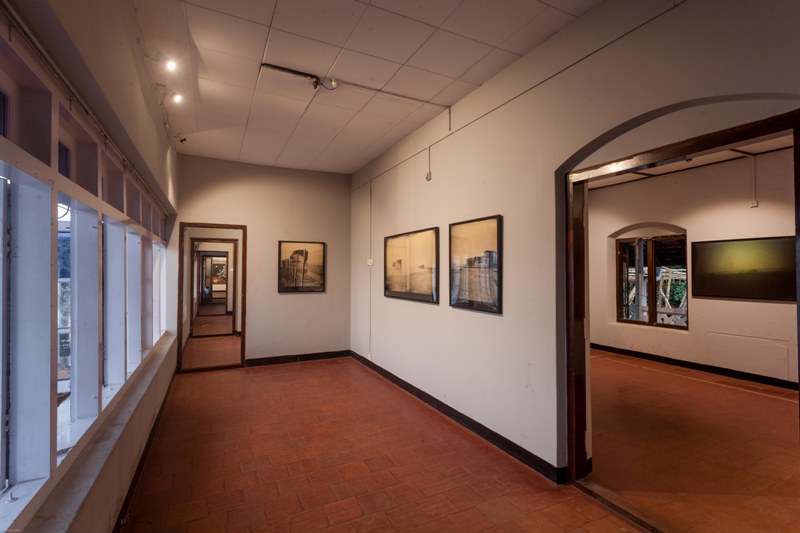 The series, Metal Graves (2009), is Dhaka-based artist Shumon Ahmed’s ode to a graveyard for ships located in Chittagong, Bangladesh. A natural harbour and once an important stop on ancient maritime networks, the seaport of Chittagong is now home to the second largest ship-breaking yard in the world: A post-apocalyptic landscape to which many of the world’s largest ships, having outlived their use, make a final unceremonious journey to be recycled.

Ahmed’s portraits of these vessels show them sitting on mud banks, like beached whales, stilled and ready to be dismantled. All around stretches a desolate landscape marked only by barbed wire fences and the bare figures of labourers whose hazardous job it is to rip apart and salvage what they can from the discarded ships. Metal Graves is thus a portrait of the flipside of exuberant narratives of growth and mobility in a globalised world. Viewed through the artist’s bleached frames, everything in the landscape stands still, moments frozen in some distant past. To Ahmed, these vessels are relics of the globalised world they helped create; their empty hulls lined up against the Bay of Bengal grave like stones that mark events in history that go beyond the stories of individual ships.

Ahmed photographed the ship-breaking yard using small film-based cameras in 2009, having gained access with difficulty into an area where cameras are regarded with grave suspicion. In the resultant series of prints, he has carefully preserved the processes involved in their production, juxtaposing in rows successive photographs in the same order as they were captured on the roll and leaving intact on individual frames the scratches and other damage sustained by the film during its development. 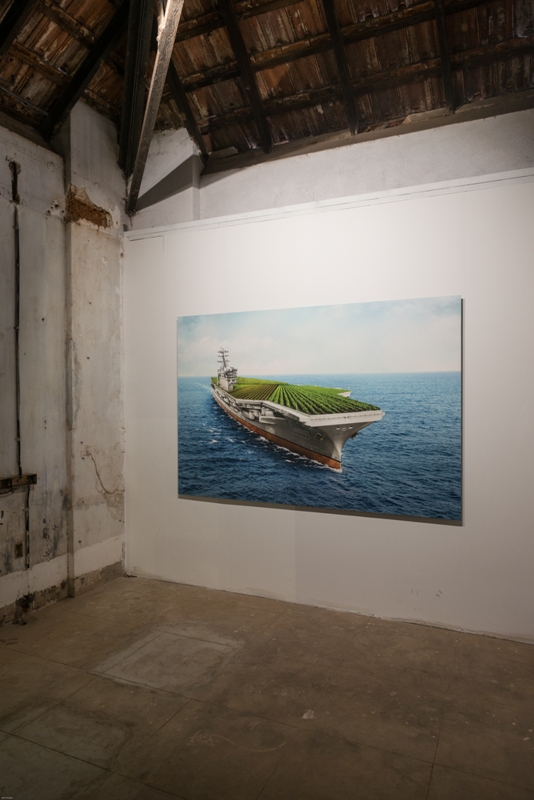 Palestinian artist Khalil Rabah’s absurdist creations are reactions to the harshness and tragic absurdity of everyday life in the phantom state of Palestine, where a fragmented community has for decades lived in a continued state of siege. Through elaborate fictional scenarios that he creates, Rabah seeks to produce parallel narratives for a people and a nation whose history has been consumed by the ceaseless conflict with Israel.

Biproduct (2010) is a multimedia project by Rabah, a part of which is presented at the Biennale. The print on display shows an aircraft carrier in the shape of Gaza strip that Rabah conceptualised. On the deck of the ship are farms producing tomatoes and strawberries to be made into strawberry jam and tomato paste by a factory on the ship. If the image of the aircraft carrier reminds one of frequent US interventions and posturing in the Middle East, the hyper mobility of this farm-factory stands in stark contrast to Gaza strip where restrictions imposed by Israel curtail the export of agricultural produce, including strawberries and cherry tomatoes, to markets outside the strip. 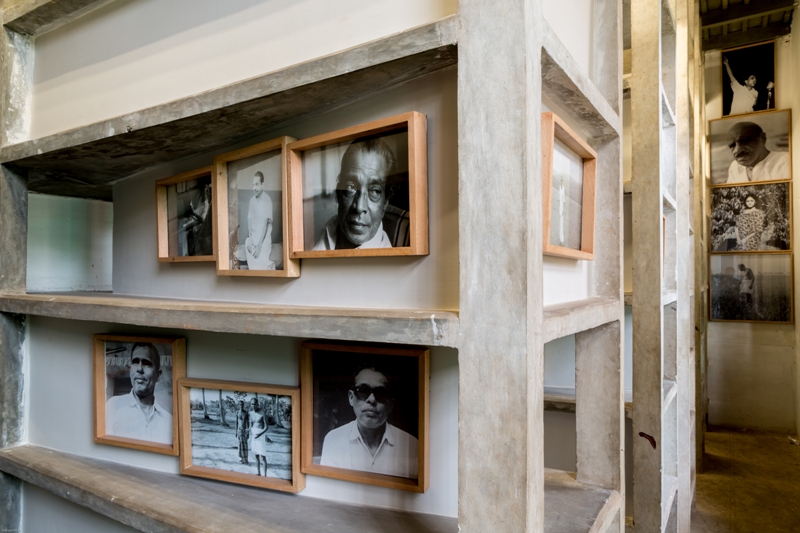 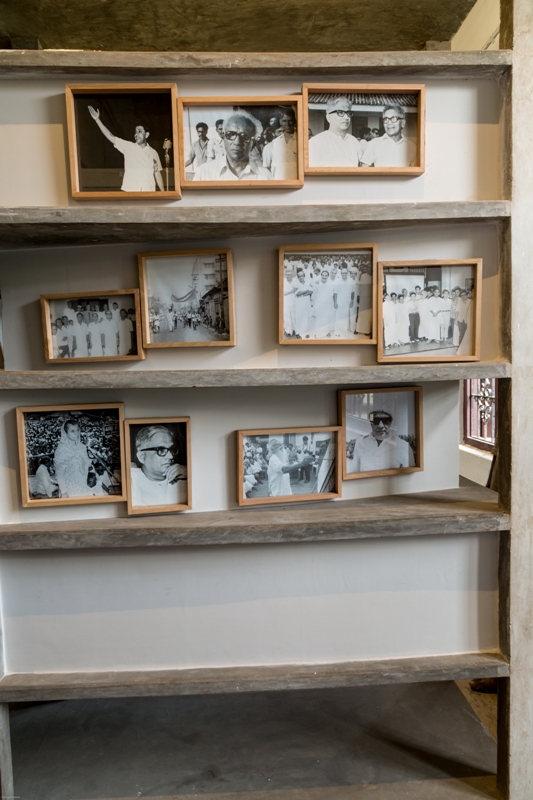 Punaloor Rajan’s black and white photographs form an engaging biography of Kerala’s cultural and political landscape as seen through the eyes of an avid chronicler. From 1956, when the state of Kerala was constituted, to the late 1980s when he withdrew from photography, Rajan documented Kerala’s major public figures from close quarters.

Rajan was a member of the Kerala People’s Arts Club (KPAC), a legendary left cultural organisation formed in Kerala in 1950. As part of KPAC’s plans to start its own film unit, he was sent for training in photography and cinematography to the All-Union Institute of Cinematography in Moscow, where alumni and teachers included figures such as Andrei Tarkovsky and Sergei Eisenstein. When he returned from Moscow, Rajan brought home a 16mm Bolex Paillard camera with which he documented several of his subjects on black and white film. His personal quest resulted in what now constitutes a rare and unparalleled archive of photographs and video footage. Selections from this oeuvre put together in collaboration with writer and journalist Mangad Ratnakaran and painter and photographer Pradeep Chandrakumar, both of whom have been working to archive and preserve Rajan’s work, form Perpetual Stills (2014), an installation of photographs that is presented at the Biennale.