For this week’s KMB Focus, we are unearthing history, scratching at the surface of the present, to list a few artists exhibiting at the Biennale who have concerned themselves with history and historical actors. While some have engaged with the local history of Kochi others have involved themselves with other maritime and colonial histories. Here is a look at those artists that actively engage with the past to comment on the present. 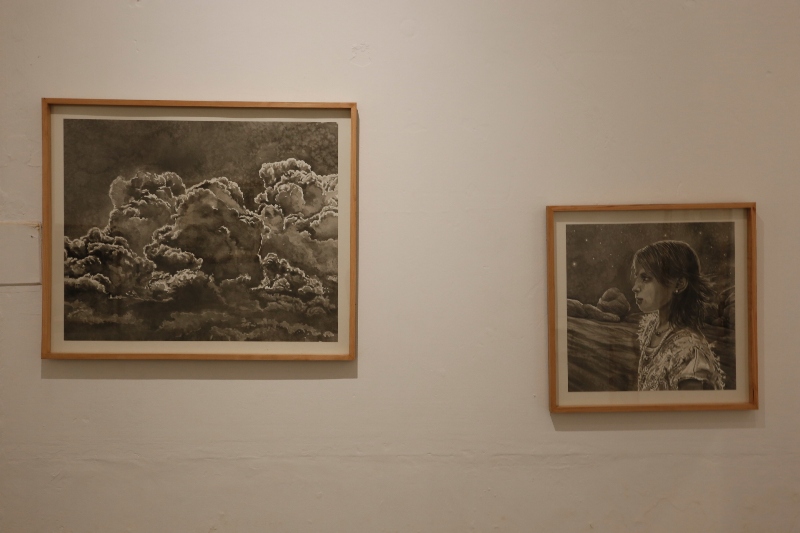 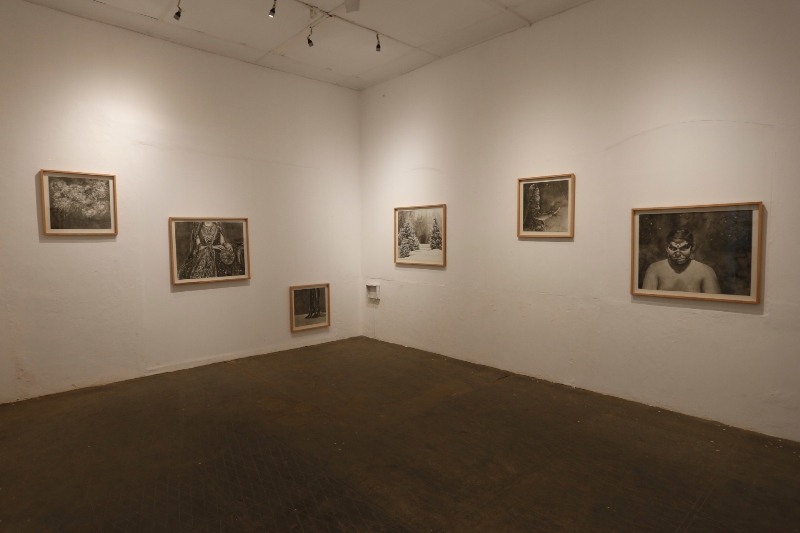 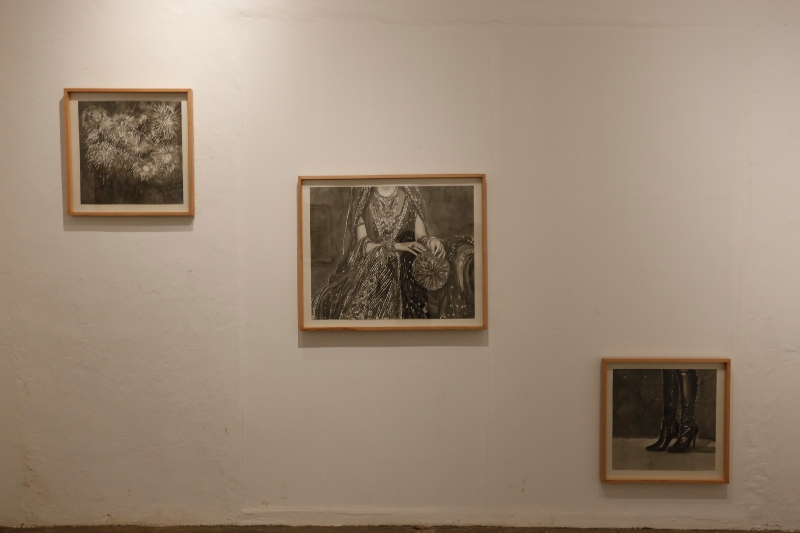 Belgian artist Hans Op de Beeck works with installations, sculptures, films, drawings, paintings, photographs and texts. In a departure from the monumental installations and videos for which he is primarily known for, the work Op de Beeck has created for the biennale, The Quiet Story (Kochi) (2014) , consists of a series of large black and white watercolours on paper presented in two rooms within the Aspinwall House. While the world that these works produce alludes to the Kochi’s local environment and history, the construction itself is entirely fictitious; being one of the Op de Beeck’s ‘visual fictions’.

According to the artist, the images were made through free association, creating a cinematic world where vast environments and anonymous figures are starting points to many possible stories. The images are meant not to judge or limit, but to act as suggestive and challenging invitations to the viewer. The water colours were all realized overnight as the artist worked in isolation and in silence for hours. “That night, with both its peaceful tranquility and its latent derailment can be felt throughout the entire series”, Op de Beeck said. 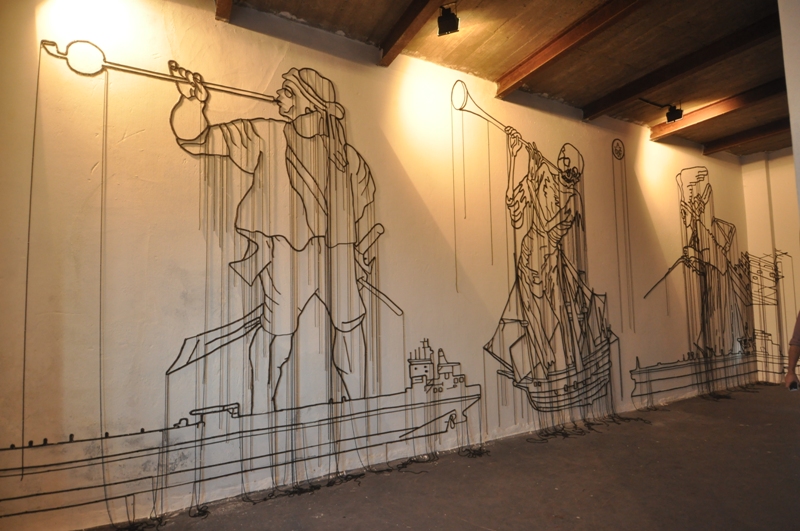 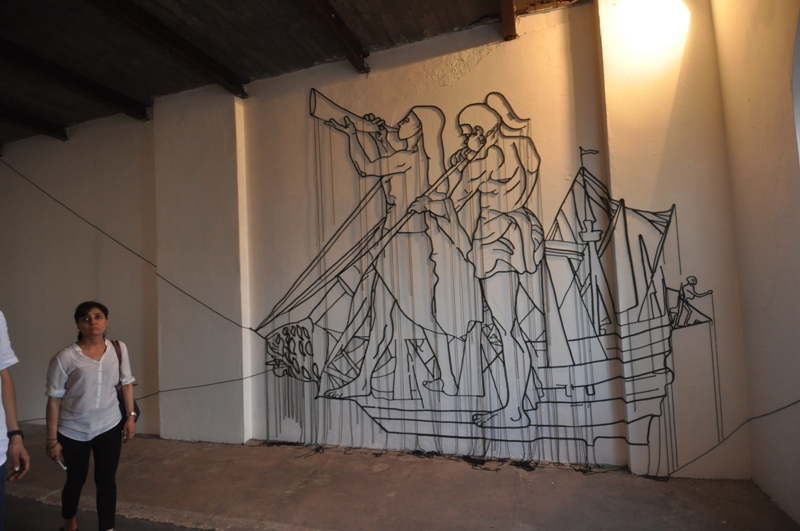 British artist Hew Locke’s works are rich with historical context and the artist is especially interested in the early processes of globalisation with its moorings in 15th century European marine expeditions. Cargo (2014) is a tapestry-like drawing on walls illustrating the intercontinental links forged by early explorers and seekers whose voyages on unknown seas left behind a world forever transformed by the encounter. Made with black cord and beads, Cargo represents numerous such journeys through the image of Sao Gabriel, the ship in which Vasco da Gama led a Portuguese armada as it sailed into the coast of Malabar in 1498, inaugurating a short sea route to India and, with it, hundreds of years of colonial conquest of the Far East. Black bead necklaces drip from Locke’s monochrome illustration of this history like cobwebs in an old house, their decay perhaps suggesting that modernity and our present is the slow unraveling of a moment in the past. 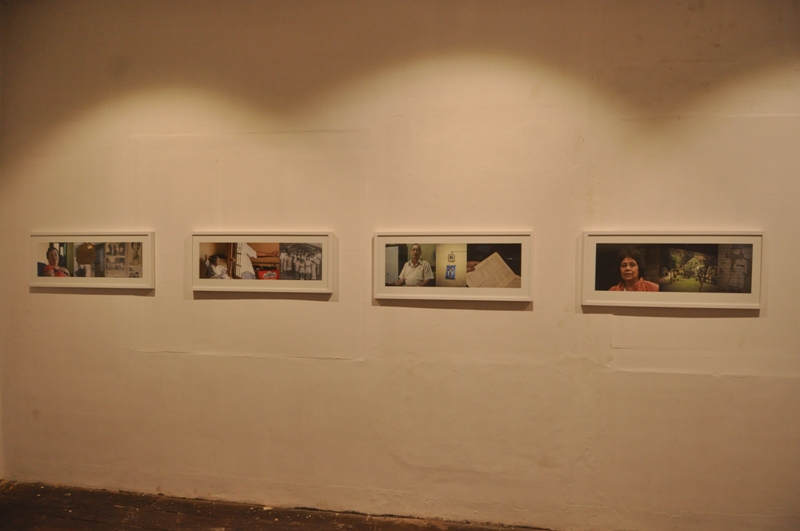 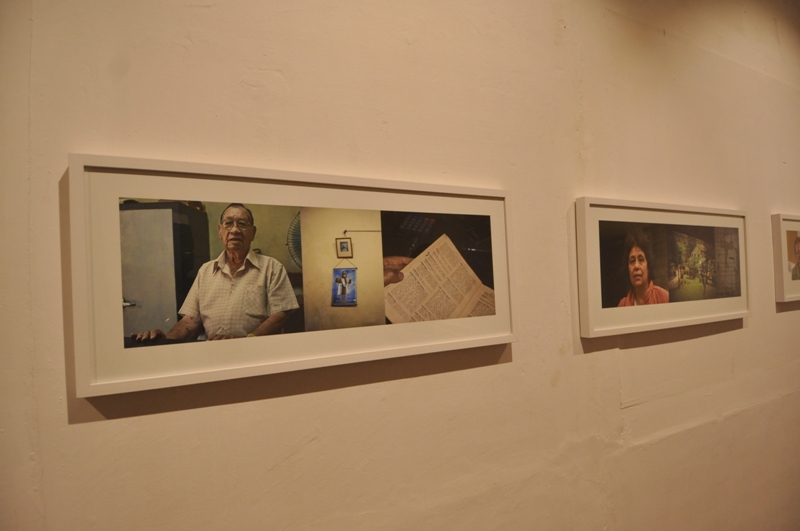 Sri Lankan photographer Menika van der Poorten’s exhibit at the Kochi-Muziris Biennale 2014, Where Are You From? (2012) documents the stories of the dwindling Eurasian ‘planter’ community of Sri Lanka. Much like the Anglo-Indians of India, Sri Lanka’s Eurasians were born out of colonial era interactions between Europeans, especially the British, and the native Sinhalese and Tamil population. Not accepted as fully European but set apart from other Sri Lankans by their light skin and Anglicised lifestyles, Eurasians have progressively retreated into the margins of Sri Lanka’s public sphere. They now constitute a minority community whose struggles to belong in a nation increasingly intolerant to differences prompts the artist’s loaded question– Where are you from?

To Van der Poorten, herself a Eurasian descended from Belgian and English forbearers, the series is only one part of a deeply personal and ongoing endeavor to archive an aspect of Sri Lankan history that she fears will soon be lost forever. She began to interview and photograph members of the largely elusive Eurasian community, including the members of her own extended family, in 2011. The resultant images and testimonies form intimate portraits of a people straddling two worlds, and are chronicles of a long history of intercontinental interactions in South Asia. 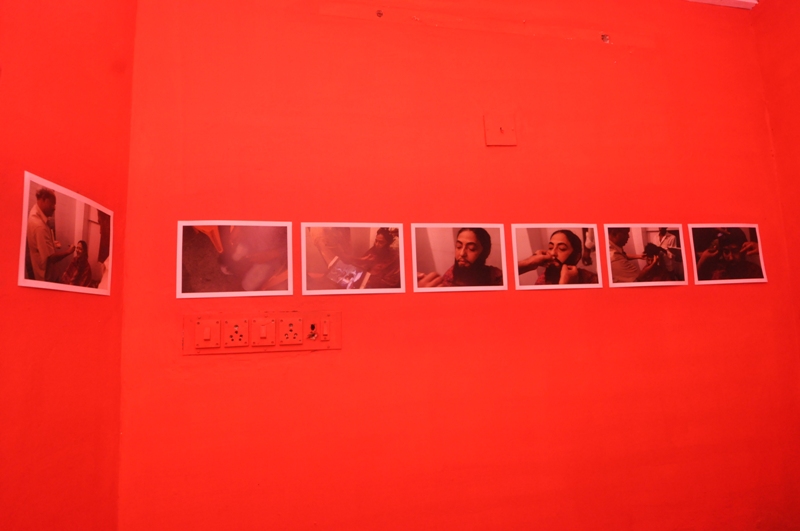 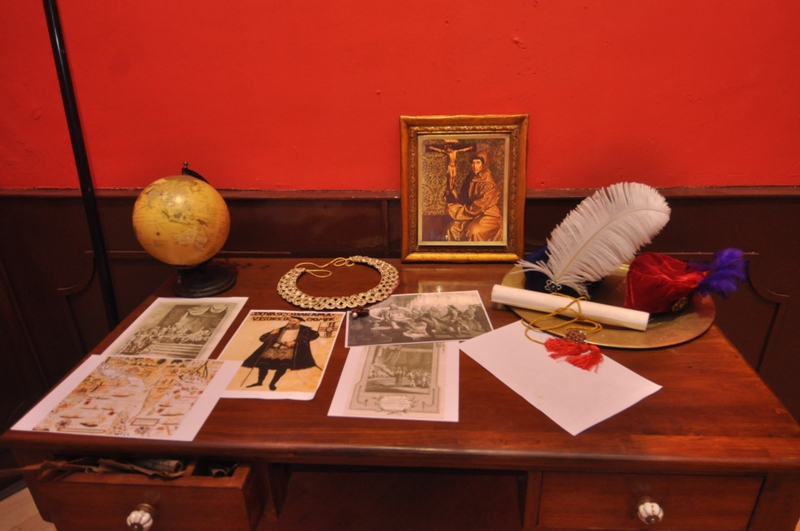 Pushpamala N began her career as a sculptor before turning to photo- and video- performances.  Made for the Biennale, the photographic work The Arrival of Vasco da Gama ( after an 1898 painting by Jose Veloso Salgado) (2014) recreates an 1898 history painting Vasco da Gama perante o Samorim by Portuguese painter Jose Veloso Salgado which depicts Vasco da Gama’s first meeting with the Zamorin of Calicut. Created 400 years after the actual event, the painting celebrates Gama’s arrival in Calicut- a much mythologised event in Portugal even in his own lifetime and shows him addressing the Zamorin’s court, a stately European visitor surrounded by the imagined decadence of an oriental court.

For The Arrival of Vasco da Gama ( after an 1898 painting by Jose Veloso Salgado) Pushpamala for the first time plays a male role as the navigator while her artist friends act as supporting cast. Around the photographs, elements of painted sets made for the photo shoot and written texts form an installation like a theatre museum. 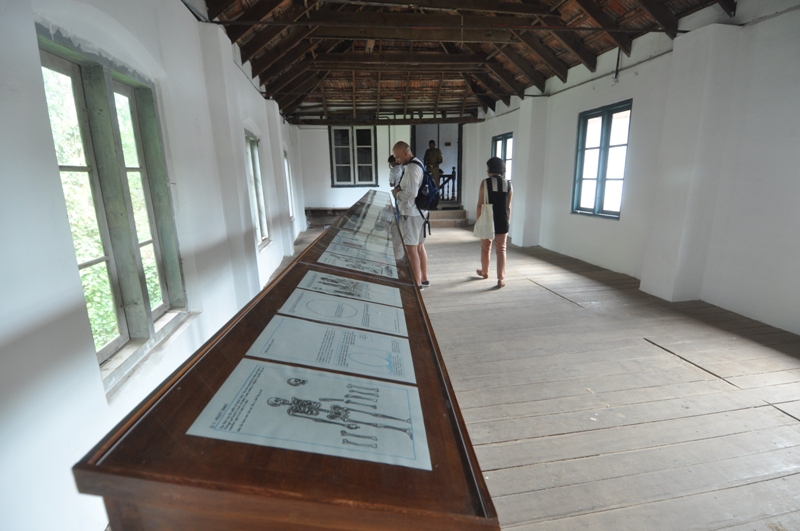 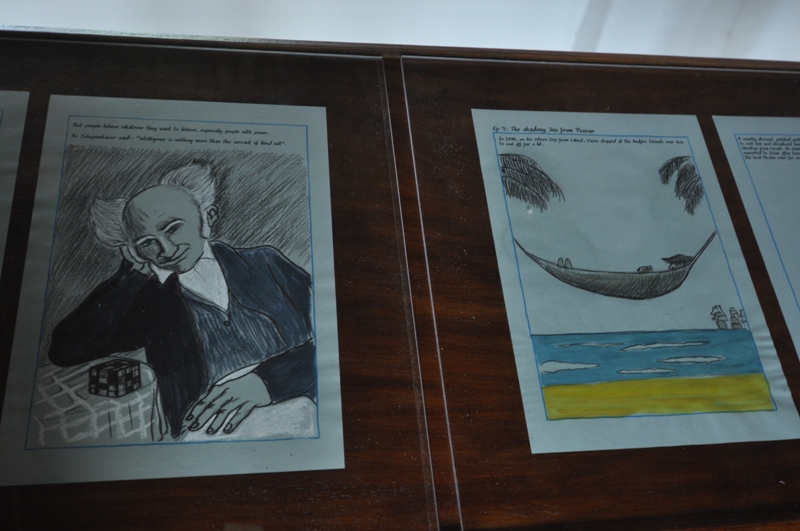 One of India’s premier graphic novelists and artists, Sarnath Banerjee is known for works that blend history, mythology and autobiography with incisive commentary on contemporary India.

His exhibit at the Biennale, Liquid History of Vasco Da Gama (2014), is a set of dialogues and conjectures that explore the shadowy world of 15th-century Indian Ocean maritime trade through the accounts of the fictional character ‘Digital Dutta’. According to Banerjee, Dutta is an unreliable narrator who works as a clerk and fancies himself to be an amateur historian. He has a tendency to find himself planted in various historical moments– either as a minor character or as an active agent responsible for changing the course of history.

The drawings for this project are distilled from the work of Sanjay Subrahmanyam, a noted historian of the Early Modern Period, and revolve around Vasco da Gama’s various encounters in the Indian Ocean. These ‘diet comics’, as the artist calls them, refer to a large cast of characters adding up to a veritable soap opera featuring pirates, popes, convicts, smugglers, ‘degradados’, famous Omani navigators, unknown Gujarati seamen, mysterious Jews from Poznan, Moors from Calicut, the King of Portugal Don Manuel and Prester John, a mythical Christian King from Medieval European chronicles who was believed to have ruled over a nation in the East. According to Banerjee, the resultant history is “neither cast in stone nor vulnerable to the charge of manufacturing the past”.