In our everyday we are surrounded by visual imagery, be it on billboards across the road, on television in a shop window, framed photographs sitting pretty on your desk, YouTube videos playing in your Chrome window or the wallpaper of your desktop. But when artists display video art to raise the most fundamental and sometimes the simplest and yet the most important of questions amidst the flurry of artworks and images at the Biennale, art becomes interactive and elicits an immediate response from the audience. Here is a look at a few artists who use this form of artistic expression. 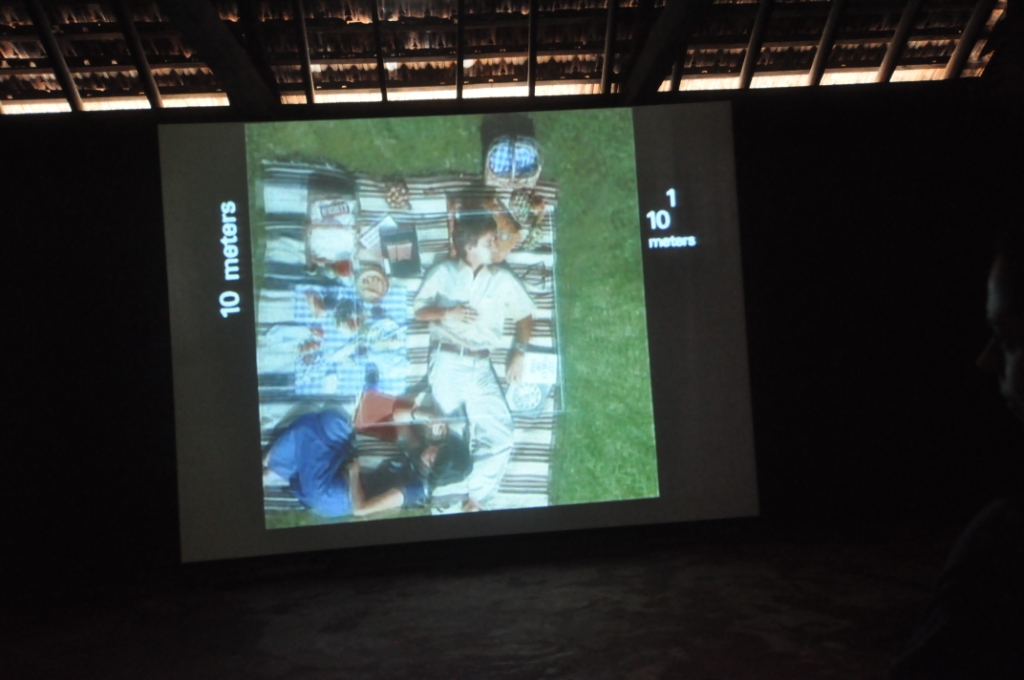 In 1977, the duo made Powers of Ten, a film essay (an early version of which was made in 1968) on the relative scale of things based on the 1958 book Cosmic View – The Universe in 40 Jumps by Dutch Educator Kees Boeke (1884-1966). Narrated by physicist Philip Morrison, the film takes the viewer on a voyage back and forth from the everyday world of our perception, shedding light on man’s place in an infinite and infinitely complex universe.

The film begins with an overhead image of a couple lounging in a Chicago park before rapidly zooming out. Every ten seconds, the camera zooms out by the power of ten, moving from a one metre square view of the couple — viewed from one metre away — to ten, hundred and thousand metres till it reaches the limits of the known universe. As the voyage progresses, the earth is left behind, revealing the solar system and the stars before going past our ‘whorled’ galaxy —the Milky Way— into far-off empty space where human understanding of the universe ends. Now the camera begins the voyage back, zooming in at the power of minus ten from the astronomical to the inner world of an atom, where we meet another limit of human perception– that of the infinitely small. As the voyage ends within a proton embedded deep in one of the couple’s hands, the sub-atomic merges with the galactic, revealing a world within us that is as infinite and filled with wonder as the vast swathes of outer space.


Mark Formanek’s Standard Time (2007) is a 24-hour performance video that shows a group of labourers racing against time to manually create a ‘digital’ time display. The performance designed by Formanek and realised by Datenstrudel involved 70 workers who, over 24 hours, continuously reassembled a wooden scaffolding to keep up with a digital time display, making 1,611 changes in the process. The performance was captured in a looped video that, when adjusted to the local time in Kochi, works like a digital clock.

As the workers in the video struggle to keep up with time with less than a minute to complete each change, the audience is forced to share their anxiety. What at first might seem like the recording of a futile exercise soon begins to embody the tyrannous grasp time has on our lives. Formanek points to time as we experience it, domesticated within the confines of a clock. Here, in a dramatic reversal, it is the timekeepers who are imprisoned within its endless march.

Embedded in the performance is a subtle comment on labour, an entity largely rendered invisible and disposable in the age of sweatshops and financial markets. In Standard Time, labour is made immensely visible in the form of a troop of quasi-mythical workers keeping time on behalf of us all. 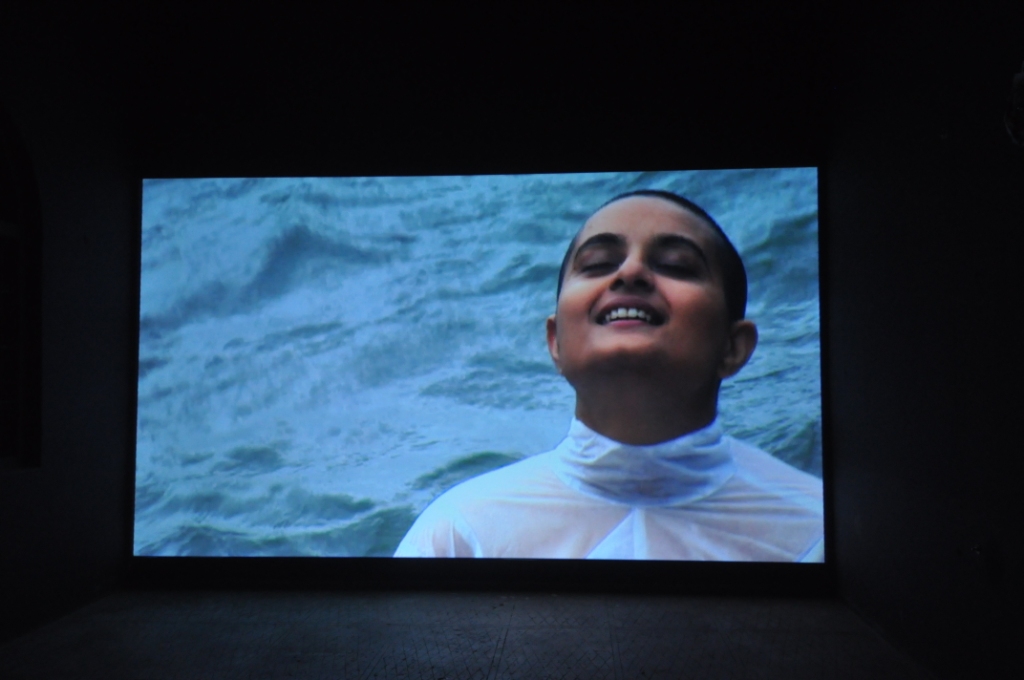 In her emotionally-charged videos, performances, installations and prints, Mumbai-based artist Neha Choksi wrestles with questions of time, the erasure of the self and nature’s inherent capacity for renewal.

In Iceboat (2012-13), Choksi, dressed like a renunciate, rows a boat made of ice until it melts, releasing her into the water’s womb. The boat becomes an extension of the artist’s body as she calmly persists in her endeavour to float despite the inevitability of collapse and decay– the final erasure of the body that is death. The video begins with underwater shots from the end of the original performance, showing Choksi diving in the water surrounded by the remnants of the boat– an image that evokes Indic notions of the soul, freed at death from its vessel, the body. The camera then moves above ground and the act unfolds from the beginning.

As the Iceboat begins to melt and topple towards the end, the artist seems to experience fleeting despair. But ultimately, Choksi embraces her surrender–a painful moment of loss redeemed by the possibility of rebirth. Viewed in Kochi, the sea breeze adds another layer to this work– exhuming narratives of doomed voyages of the past, the many sunken expeditions that define a coast as much as the ones that made it.


Michael Stevens is a poet-philosopher of the information age. He is the creator of Vsauce, a popular YouTube channel that seeks to tell its viewers amazing facts about the world they live in. A compelling narrator, Stevens in successive videos draws viewers into a whirlpool of recurrent enquiries. In a manner that marries the fluidity of spoken-word poetry to a science or philosophy lecture, he sets out to find answers to questions that are a skilful intermingling of the profound with the seemingly naïve and absurd. In videos that are displayed across the venues of the Biennale, Vsauce attempts to answer a range of questions that many of us may have thought of as children but have since stopped asking: What Is the Speed of Dark? What If The Earth Stopped Spinning? and Is Anything Real?

Delivered in Steven’s inimitable style, these videos act as playful punctuations within the narrative of Whorled Explorations. 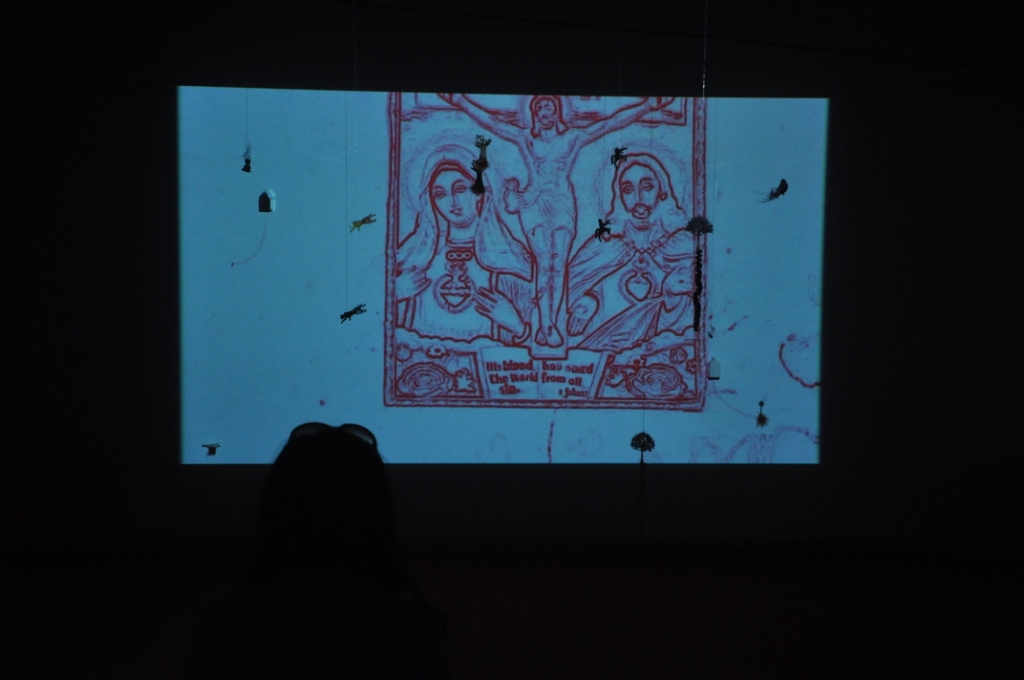 Mithu Sen, in her multi-media installation I have only one language; it is not mine (2014), engages with the idea of “radical hospitality”, exploring in the process the limitations of language and the possibility  of dialogue outside it. For the project, Sen spent several days at a home for minor female orphans and  victims of sexual and emotional abuse in Kerala, interacting with children as the alter-identity ‘Mago’– a  seemingly homeless person who speaks in gibberish, does not understand the concept of time and is in  a state of transit between two unknown places.

During this unscripted performance, Sen sought to surrender her body to this group of children who became her host. According to the artist, she placed herself in the situation as if she and the children themselves were all fictional, seeking to make herself the subject as much as the inmates of the home.  According to Sen, the interaction was an attempt to understand the complexity of the construction of domesticity, family and relationships.

The performance was documented on video by the artist, a house mother at the home and the children, who intermittently took the camera into their own hands. The manner of documentation evolved in the course of the project, Sen said. A video and sound installation assembled from this footage, along with “remnants” of the performance and other related elements, form her exhibit.

Reflecting on the work, Sen writes: “I believe language imposes a strange and alien logic that tells us not to smell poetry, hear shadows or taste lights. Escaping this rigid framework, this project seeks not only to locate communication outside the narrow alleys of comprehension, but also tries to envisage dialogue in a way that cannot be read, heard or understood.”


Chinese artist and curator Yang Zhengzhong’s works embody the many inner contradictions and confusions of life in a post-modern city. Like many other works by Zhengzhong, 922 Rice Corns (2000) is a whimsical video. Here, the artist films a cockerel and a hen as they peck at rice strewn on the floor.

922 Rice Corns begins with a close-up and zooms out to reveal a disc of white rice on the floor, an image reminiscent of the Earth. As the chickens begin to peck, a man and a woman count aloud the number of grains ingested by the male and female birds. Three tickers below keep count of the ‘scores’ of the two birds as well as the total. This seemingly innocent contest soon takes on other dimensions, evoking politics of gender and debates around consumerism.

The repetitive visual and sounds in 922 Rice Corns hint, perhaps, at the numbness experienced by men and women living in times where the race to consume overtakes all other aspects of life; where consumption is both the game and the rules of the game.


Sumakshi Singh’s interactive installations play with perspective to create ‘illusions’ that allow viewers to inhabit and alter her imagery through their movements. In, Between the Pages (2014) is an installation with references to the history of Kerala.

Close to the entry to the gallery is a table where audiences get their first glimpse of the illusion: The projected view of two manuscript pages where the various elements —birds, whirling planets and viewers themselves— are in motion. Turning away from it, they enter a 70 feet-long maze made of hanging paper scrolls that align from one angle to form the elusive manuscript page. These scrolls feature paintings, delicate collages and projected animations that bring to life a range of narratives.

At the other end of the gallery, a second projection ties together these fragments of history through yet another aligned view of the illusion where viewers find themselves reflected back as a part of the image, transformed into one of the characters in the pastiche manuscript.

According to Singh, she has always considered voyages in the external world to be reflections of the inner journeys through which we seek to locate ourselves in “space, time, cultural history and simply in our own stories”.