Learn The Architecture Of Shadows With Bhagyashree Suthar

“There is a thought, then there is its translation and finally there is art.”

Intelligent and overtly humble, Bhagyashree Suthar from Jodhpur, Rajasthan has carved out a niche for herself at a young age of twenty one. A brilliant and persevering artist, there exists a silent precision across all her works which gives them a distinctive charm. The exceptional clarity of thought behind her multi-layered depictions is what led the Artsome Jury to unanimously pick her as our winner.

In an exclusive interview for Artsome, Bhagyashree tells us about kite paper, shadows and the role of architecture in her works.

Tell us something about Bhagyashree Suthar, the artist. Some qualities, traits that you would like to share.

Being an artist is like a reflection of Bhagyashree Suthar, like another dimension of my personality and probably my most important identity. The context of architecture in my work and its connotations are again a personal reflection and recollection. The sole reason I work with architecture is because it is me. I relate to it in its existence which I see is no different than mine.

Bhagyashree the artist sees herself as an architectural identity that realizes itself in the rigidity, form and the aspect of containment that I see realized best in a concrete structure. I relate to it characteristically in its systematic, semiotic and pragmatic essence.

How did you start your journey into art?

I don’t know how to answer that. I believe art comes to everybody naturally, as it did to me. Even when you learn to write your first letters, you begin with scribbles. That is where I think we all begin with art. It is just that I continued scribbling, that evolved into landscapes and figures and eventually became a part of my existence. One of my friends says that in life, there is ambition and there is vocation – ambition is what you want to be, and vocation is what you are called to be. For me thankfully both have been art and I don’t know how to be anything else, but an artist.

Is there an artwork of yours that you are particularly proud of? If yes, then tell us why you think so.

I think that would be ’Impalpable reach’.

There is a thought, then there is its translation and finally there is art. With this work, I think I have achieved the entire process to a great extent, also it being the first of what I can now call my own artistic and visual communication language. 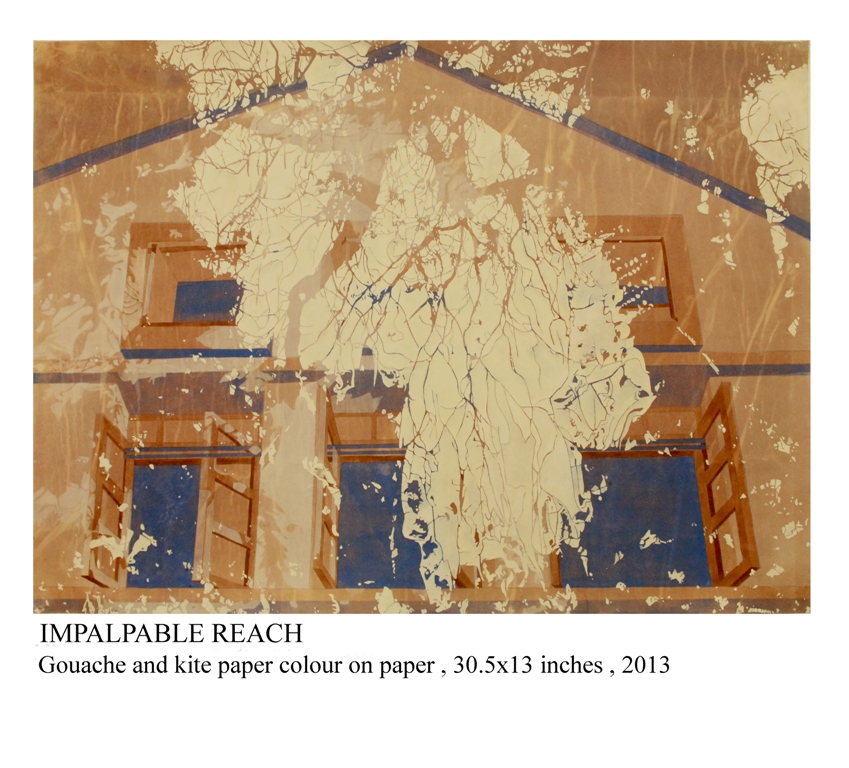 What inspires you to create art? How did you conceptualize this piece (Impalpable Reach: the winning work)?

I wanted to embrace the unexpected perspective. The foremost notion of my work is the hypnotic quality of architecture- the kind of building that literally transforms the vision.  The play of shadows brings about a sense of relief developing into an architectural shape and direction of my own, while estimating a relative distance from my eye. I see the shadow as an embellishment to the architecture without which it seems dull and devoid of energy, almost lifeless.

I adore Zaha Hadid, the architect and her quality of providing her architecture the ductility of almost a melting existence. This is where I draw my influences; from the exquisite yet distinct character of her architecture. The concept of the shadow struck me when I looked at the works of Peter Doig, especially ‘The Architect’s Home in Ravine, which enunciated various discourses relating to the shadow. I started looking towards the shadows and the negative parts of a barren tree and juxtaposed it over the architecture, bringing about an important and seminal work from my current oeuvre, which happens to be the “Impalpable Reach”.

Tell us about your process of using kite paper washes. How did you get this idea?

I chanced upon the use of kite paper accidentally! During a collage exercise the kite-paper got drenched and the colour ran onto the paper, creating an effect that had a lasting influence on me. It evolved as a fundamental metre in my work. It is almost like a process where while making a composition, I pre-ready the paper by soaking it in water to moisten it; following which I layer and remove wet kite paper laboriously for about 15 to 20 times till it gives my composition an illumination sufficient without any artificial light. 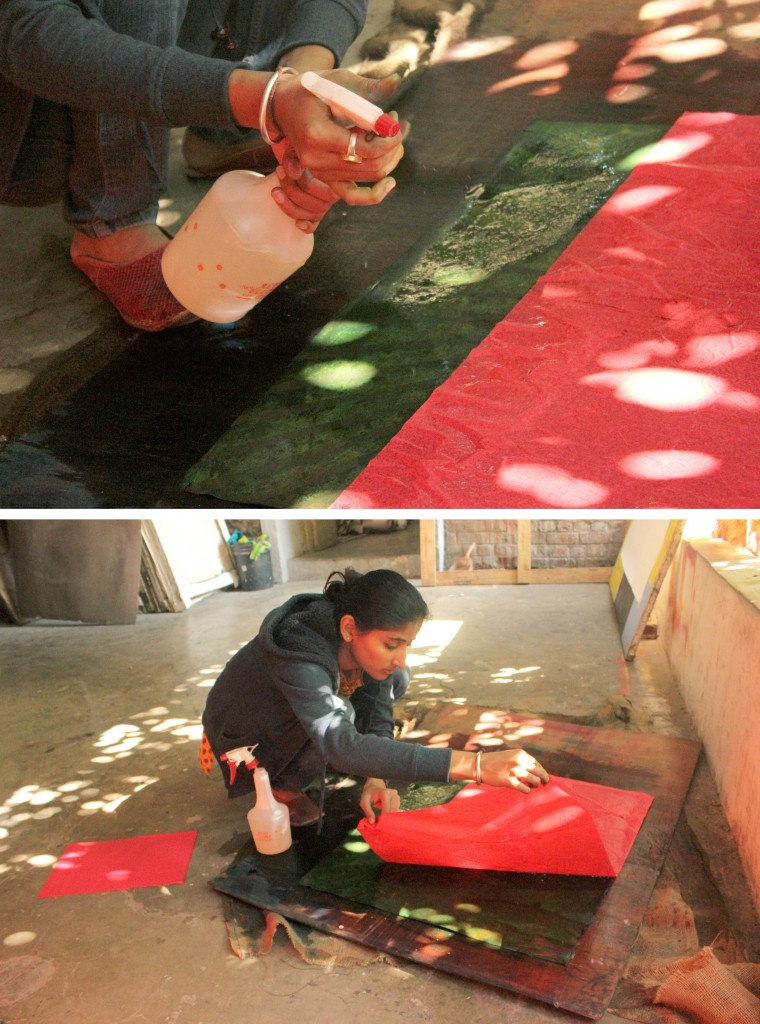 How do you know when one of your works is finished?

To me a work is complete, when I am satisfied with its realization. Like I said, it is an embodiment of me and thereby the closest I get to seeing myself in it, determines its completion. In fact, the process itself is a fulfilling experience.  I feel a sense of contentment post the laborious techniques I employ, which are almost meditative in my opinion.

Is there an element of art that you enjoy working with the most?

My art would be incomplete without the play of light and shadow where I use them as metres of communication- It’s almost as if the architectural structure is communicating via the various shadows it casts at every point in the day. Secondly, architecture becomes multi-dimensional because I use both conventional and unconventional shapes, which look almost puzzle-like and synthesize to form a complete whole. 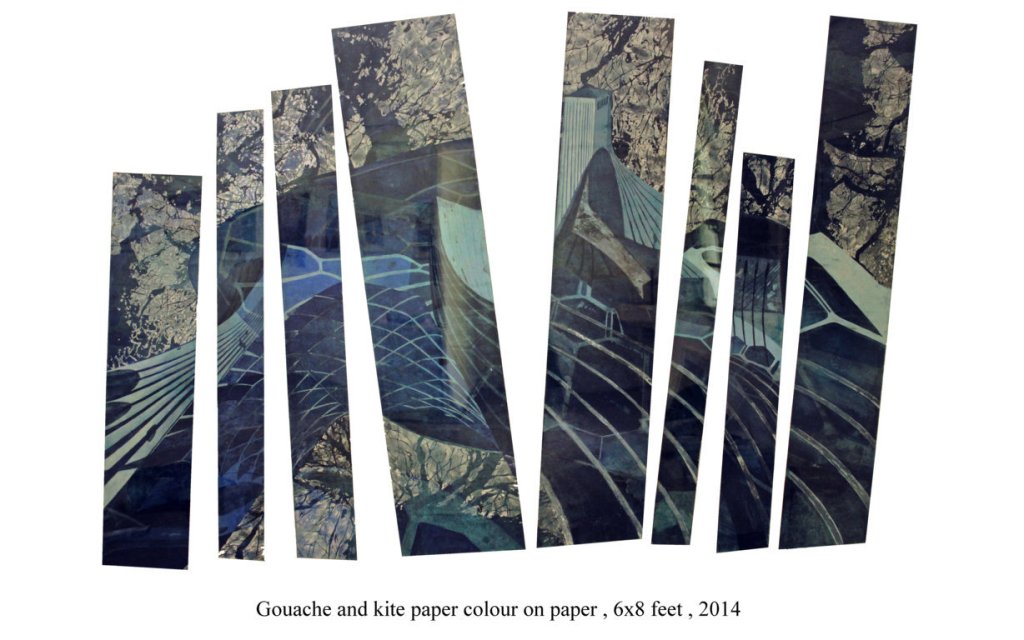 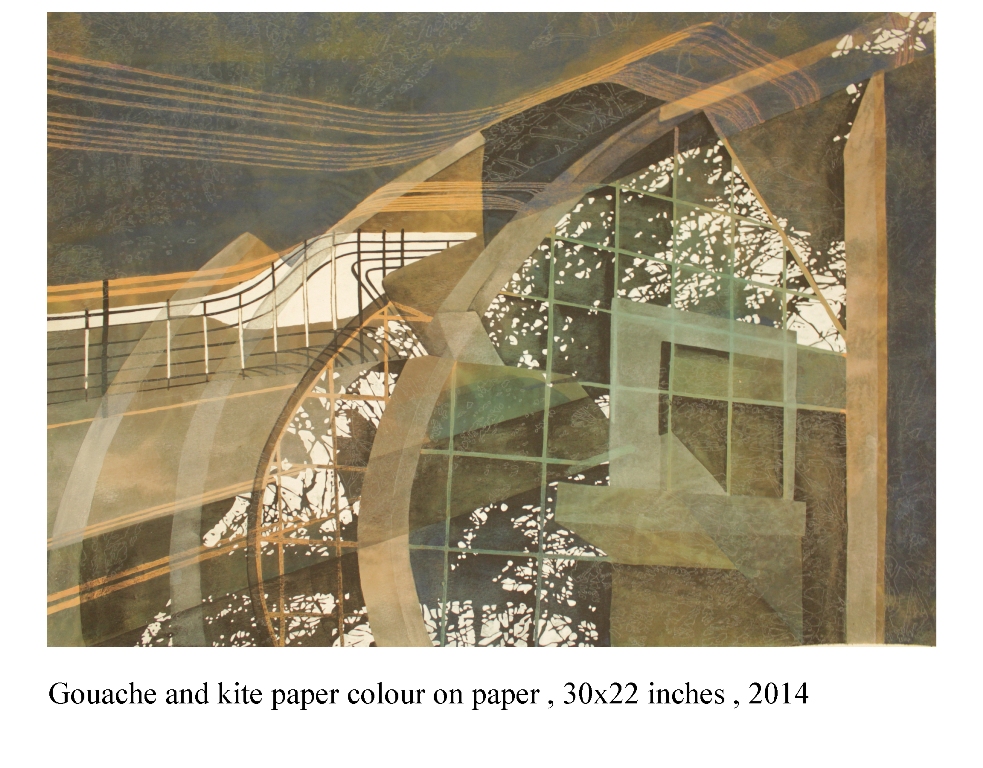 Tell us about your concept of shadows. How did you decide to paint shadows white instead of black?

Understanding shadows as the spirit of the structure (in the works), they are rendered in white instead of the logical black, elevating it to a stature of divine importance. I feel it mysteriously withholds information, abstract subject matter and often provokes the imagination of the viewer.

Elaborating on what I said earlier a shadow is like the language of architecture; it communicates various things at various points of the day. Usually shadows are used in the phrase ‘dark shadows’, almost with a hint of negativity. I see them as positive and thereby render them in white, as something more pure and positive. 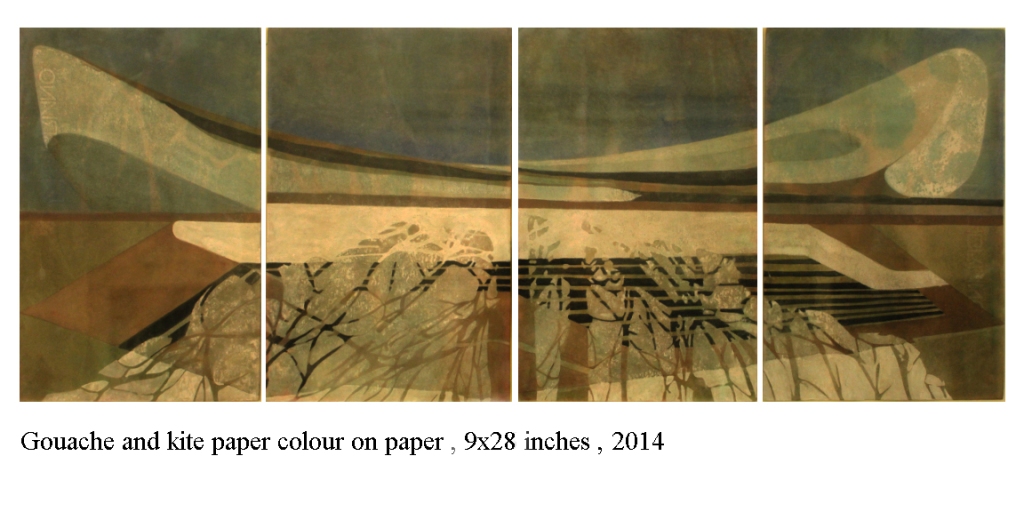 ho is your favorite artist/architect and why? Would you say his/her works have influenced your artistic expression?

Initially I referred to the works of George de Chirico and Edward Hopper, but they both depict the dark silence of an empty city via its architecture revealing the pain, sorrow and isolation. But for me it’s different; I tend to show the beauty of the silence within architecture with its mysterious shadows. Peter Doig and Zaha Hadid as I mentioned earlier are influences to my opus as well.

What are your future plans as an artist?

I think and I feel it is an established fact that an artist can never plan; I think no one in the arts can. I just plan to work and keep communicating. Creativity works the worst under deadlines, so I intend to take it easy, contemplate and make my art.

What’s the best thing about being an artist?

To be able to communicate and reach out to the people that I do.

What’s the worst thing about being an artist?

To feel the need to communicate.

What reactions/interpretations do you receive from people about your works? Are they the same or different?

The thing about art is that it opens up to people of all ages, orientations, backgrounds and approaches. So the reactions will obviously be many. Mostly the lay people look at work as good/bad in simple terms. If the colours work for somebody, the composition works for the others, the intent may work as well for the slightly more art-read people; but graciously the response( which is a better word for me than reactions), has been good- It makes me want to go on and start my next- which I think is positive. Isn’t it?

Lastly, how do you feel when people interpret your artwork differently?

I think that is the whole point, isn’t it. I make my art and once it is up there, I walk the bridge and come to the viewer’ side of it. It is always better to stand in the crowd and be a part of the conversation they make about your work. Everybody takes away something different from my work and their connections and contexts to it are also diverse. I think this is great and here is where my art works. It makes me ambitious and gives me the energy to go on.