Marina Abramovic and the enthralling world of conceptual art

“Art is not what you see, but what you make others see.” ~ Edgar Degas

With this essence, Marina Abramovic welcomes you to her  world of conceptual art, transcending material things to deeper realms of our being. Her work creates a chasm distinguishing two important realities- one where we feign ignorance in our everyday lives and another of the connection between mind and body where ignorance deserts us. A style of performance art named as ‘abramovics’ in science fiction novel 2312 by Kim Stanley Robinson is evidence of how Marina Abramovic has become an indisputable and indispensable part of this form.

Born in Serbia in 1946, she has performed across geographical boundaries from her home turf to Amsterdam, Edinburgh, Tibet, Australia, China and many others to her current base in New York. This pretty much defies the early days of her career in Yugoslavia where her mother practiced a strict control over her children, not allowing any movement after 10 o’clock in the night.

Quiet astonishingly, for an outsider to this world of performance and body art; she has played with knives and fire not akin to that of a magician or an acrobat. In 1973, performing for the first time in Edinburgh, she evoked the message of state of consciousness of a performer by taping whenever a knife cut her hand, replaying it to track and perform the same movements. With this meeting of sound and stab, she tried to merge the past with the present. 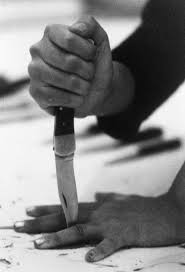 Interaction and involvement with the audience has been another peak of her performance style and also the best identified with her work. The following was also one of the most intimidating of her works. Placing about 72 objects on a table ranging from a rose to a whip, honey, scissors, gun, oil, scalpel and many absurd yet everyday things, she asked the audience to use them on her. In an exercise that lasted exactly six hours, the audience went from caution to modesty to aggressive violence. After the hour hand of the clock at visited six numbers, she found her clothes torn, thorns in her stomach and much more. She even quoted that “I felt very violated”, someone even put the trigger at her head while another removed it.

After, as she moved towards the audience, they ran escaping any confrontation. She agreed that leaving it solely upto the audience can call death for the performer. Such was her quest for and tryst with art. In 2010, The Museum of Modern Art held the biggest exhibition of performance art from 14th March to 31st May, where for 730.5 hours she sat in silence while the audience took turns in front of her.

Together with artist Uwe Laysiepen (Ulay), she explored themes like ego and artistic identity, state of consciousness, relation in space and spiritualism in relations. They traversed extremes; dressing and acting like twins to ending their tense relation by walking from the opposite ends of The Great Wall of China, meeting in the middle to bid adieu. Her myriad colored relation with Ulay was also observed during MoMa night performance in 2010, through her emotional vigor and reaction upon his arrival despite their conversation a few hours earlier. It appeared to be a relation of freedom yet of restraint, unimaginable as being only either.

The world of glamour and theatre has not remained oblivious to her great art. Prominently, Pop singer Lady gaga has collaborated with Ms. Abramovic. It has been a two dimensional association; for instance in 2013 Abramovic contributed to her third album called Artpop while Gaga can be seen contributing in ‘Abramovic Method’ video. She has also worked with the reputed American theatrical stage director Robert Wilson on the production titled ‘The life and death of Marina Abramovic’. Actor James Francon, who had interviewed her for Wall Street Journal Interview (2009) is rumoured to hold a close friendship with her.

Renowned as the ‘grandmother of performance art’, prizes and awards are just paper testimony to her grandeur and mystique. Golden Lion, XLVII Vennice Biennale in 1997, New York Dance and Performance Awards (The Bessies) in 2003, Austrian Decoration for Science and Art in 2008 and ’13 July’ Lifetime Achievement Awards, Podgorica, Montenergo in 2012 are a few feathers from the many in her cap. Marina is now setting up Marina Abramovic Institute in NY for promoting a marriage between art, science, technology and spirituality.