Art, however remains was one of the most valuable ways of expressing one’s love. Be it unrequited love, or an ode to a beloved or a more collective message of love, Art depicts the strongest of emotions like jealousy, rage, lust, sexuality, blending together reality and imagination from scenes the artists either witnessed or experienced in their real life.

There are many art masterpieces that have been influenced by love. Listed below are works that would move you, inspire you or just cheer you in ways you never imagined before.

The Meeting on the Turret Stairs 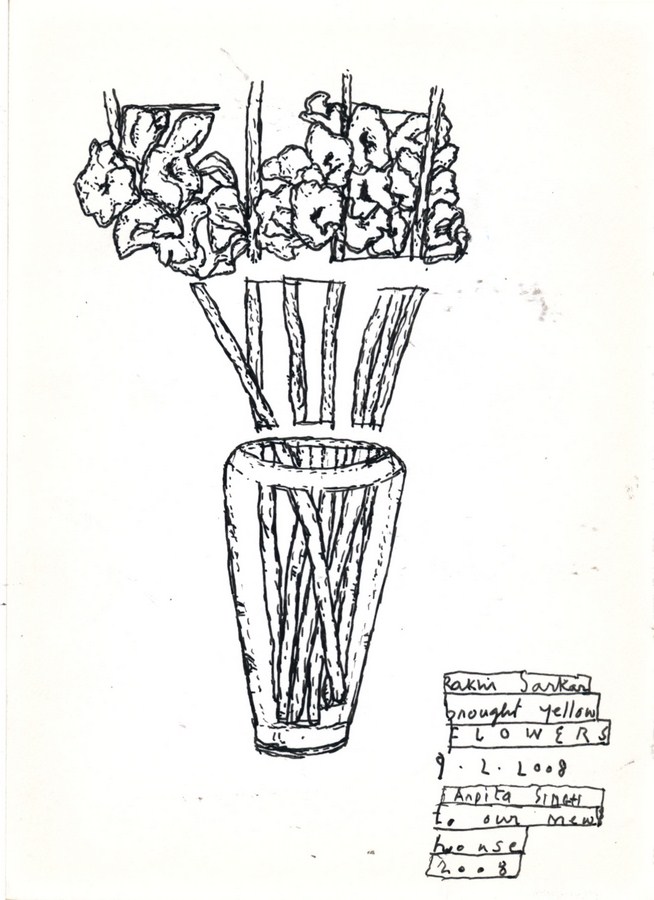 Frederic William Burton, Hellelil and Hilderbrand, The Meeting on the Turret Stairs, 1900, watercolour and gouache on paper, 37 x 24”

What is love without tragedy? Truest of true loves are hardly untouched by tragedy. This painting finds its inspiration in a Danish Ballad depicting the ill fated romance of Hallelil and Hildebrand. The scene captures the final embrace of the princess and one of her twelve bodyguards, who had fallen in love with each other but her father disapproved, finding it an unsuitable match and he ordered his seven sons to kill the bodyguard. Hildebrand was one of the best knights and he killed Hallelil’s father and her brothers but she intervened to try to save the youngest brother. In the end Hildebrand died of his wounds and Hellelil died because of heartbreak.

The scene in the painting is the moment right before the violence. It shows how Hildebrand is holding Hallelil’s hand and smelling it, thereafter kissing it one last time, and she is grief stricken.

Be it the small opening of light above the staircase, or the fallen flowers close to Halleli’s feet, the painting is so quiet and yet the viewer can imagine the pain, love and plethora of emotions depicted in the painting which displays sadness to the most common of people untrained to the viewing of art masterpieces. 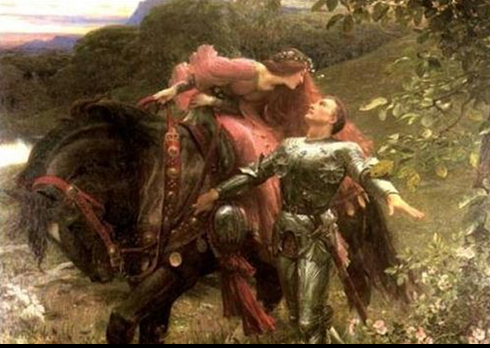 What is it that we feel for the femme fatale of the world? We know something is so bad that it almost starts to feel good. Much like the world of love that enchants us, captivates our hearts and at times shatters the heart into million pieces that can never be fixed together.

Frank Dicksee’s La belle dame sans merci which translates into ‘The beautiful woman without mercy’ is a painting with its inspiration in the ballad by the poet John Keats, of the same title.

The ballad is set in ethereal surrounding where the Knight meets the fairy like woman and is entrapped by her beauty. The knight is convinced that this beautiful woman has also fallen in love with him. As a consequence of this fast romance, he gives his horse to her and she kisses him to sleep, from which he never wakes again. He dies at the hand of this fair maiden. This is the very scene that is depicted in the painting by Frank Dicksee. She is wearing a garland on her head giving her a fairy like quality with a floral halo on her head, her last look at the knight is one of love. The moment captured is possibly right after the kiss of death that she plants on the knight, which can be seen in the way his arms have been positioned almost to indicate the fall of the knight that followed thereafter.

Love is not about just being on the receiving end but also on how much you are willing to give. This painting shows how the painter is engrossed in his work yet is sharing his work with his beloved, and the expressions together with emotions, reflected on both their faces show how much his work means to the painter and how much interest the woman actually has in his work. The love exuded as a result with excellent light play is an incredibly dominating feature of this painting. It’s a scene of two lovers together, enjoying each others’ company tremendously, also indicating the significance given to companionate marriages in 19th century Protestant England.

This work by Montgomery has been best explained by the man himself ‘made from recycled sunlight—the sculpture recycles sunlight to illuminate itself, as a metaphor for what we do when we remember someone we love’. The meaning drawn out of this is very simple and straight forward, that it is not easy to forget the one that you have once loved, in fact it is impossible. We keep the ones we love alive with the memories shared, both good and bad, promises broken, hearts replaced and all these memories are under the sun, growing on to you each waking hour, waiting for their chance to be illuminated at perhaps the very next turn you take, or the next song you hear, or the person you just met.

En route to Philadelphia Art Museum one can’t miss this phenomenal Love sculpture by Robert Indiana. The buildings in the background show Philadelphia Art Museum. This word in itself is a positive affirmation to remind the ones who pass it by, for a moment, how powerful and beautiful the word colored in Red is! This is truly romantic to say the least.

This is one of the most powerful series of sculptures with great depth and meaning. The sculpture depicting two diamond rings is installed in various places such as Sunset Beach, Vancouver, Canada, Nevada Museum of Art in Reno, Nevada, San Diego, California etc The sculpture at Sunset Beach is 30 feet tall, it’s interpretation is largely based on the meaning that “marriage requires a balance between two people with different interests, tastes and backgrounds” and represents the “dichotomy of marriage, expressing the romantic and the melancholy”.

It’s a 29.53 feet tall bronze statue in St. Pancras railway station London. Paul Day is an English sculptor who has a French wife. This reference is there in most of his works. This sculpture in itself is an embrace between Paul and Catherine, metaphorically representing St. Pancras’ role as a rail link between England and France.

Not hard to say, that this world is a beautiful and romantic place to live in! Make the most of it, this Valentine’s Day, and do try to add some art to your Valentine’s Day this time around, even if it means a small DIY or a tiny sketch for your beloved!