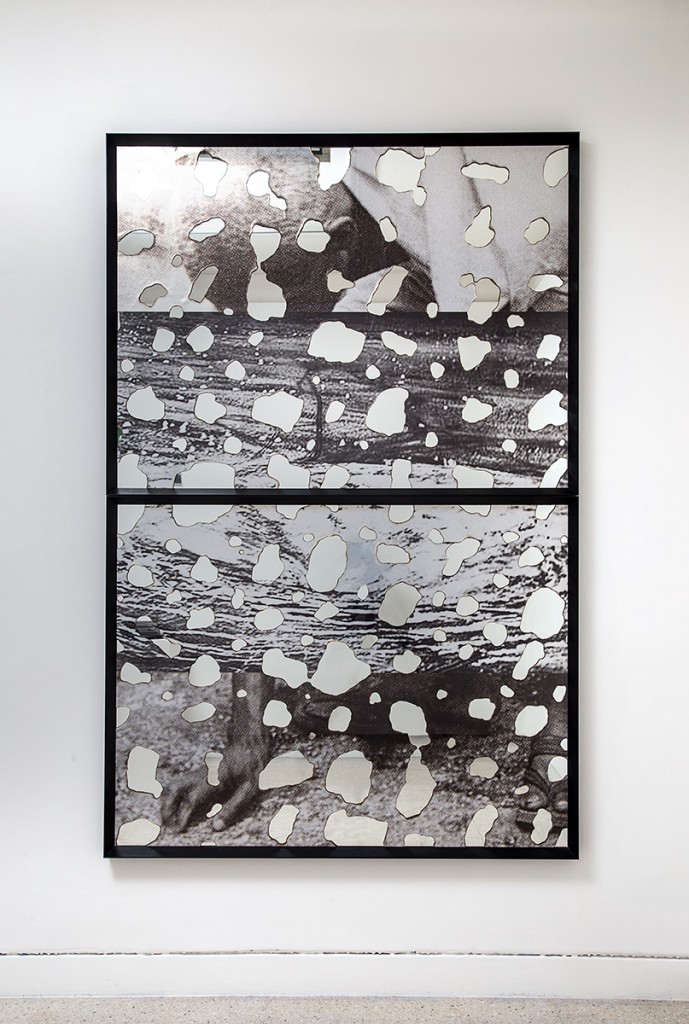 “To abstract is to draw out the essence of a matter. To abstract in art is to separate certain fundamentals from irrelevant material which surrounds them,” has stated author Ben Shahn. Rajorshi Gosh and Bijoy Jain’s show at the pristine Nature Morte Gallery draws a “bit of abstract and a bit of matter” and recreates a stunning portrayal of “what lies beneath” the evident.

In this combined display of artworks and installations by both artists, it appears that each one has their unique and distinctive voice and yet juxtaposed together, they form a perfect harmony. The curating is indeed impeccable! 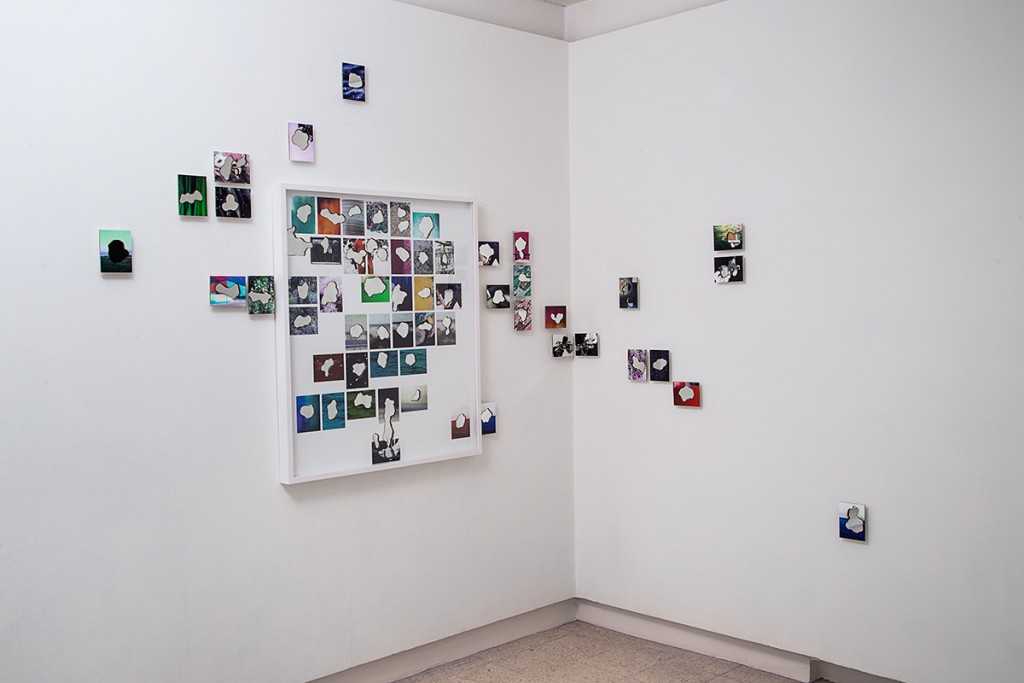 Kolkatta based artist Rajorshi Ghosh uses a very clever technique of downloading popular and some very unpopular or seemingly unimportant images at random from the internet and after a technique of burnishing them, juxtaposes them on to mirrors. Now, this creates a very interesting illusion for the onlooker as there are pieces of an important image, say Mahatama Gandhi’s Dandi March depicted in ‘Landscape with Leader’ or the world leaders marching in solidarity against the Paris carnage in early 2016 or even some rejected images interpreted by the artist as ‘Selected Images’ as they were actually chosen amongst thousands of images. In January 2016, more than 40 world leaders setting aside their differences joined French President François Hollande in the solidarity march against terrorism. Included were Israeli Prime Minister Benjamin Netanyahu, Palestinian President Mahmoud Abbas, Ukrainian President Petro Poroshenko and Russian Foreign Minister Sergey turned the city of Paris into “the capital of the world,” and this image has been deployed by the artist to brilliant effect with snatches of their famous faces and locked hands visible. ‘We are all Workers’ offers an insight into a dug up construction plot near to the artist’s home in New Delhi and when one stand opposite that piece, it just transports the viewer into wondering about the fact as to how we are all staring at our work all the time, be it a bottomless pit for a construction worker or a blank screen for an editor…such is the power of these creations.

When the viewer stands against these evocative pieces which are beautiful in their own right, offering distorted pieces of a seminal event like pieces of a jigsaw puzzle, it compels the viewer to reconsider as to how one should interpret images, information, statistics and facts. Is everything to be taken at face value or is there a deeper meaning lying beneath the surface? That is what the audience is left wondering…such is the power of these works. 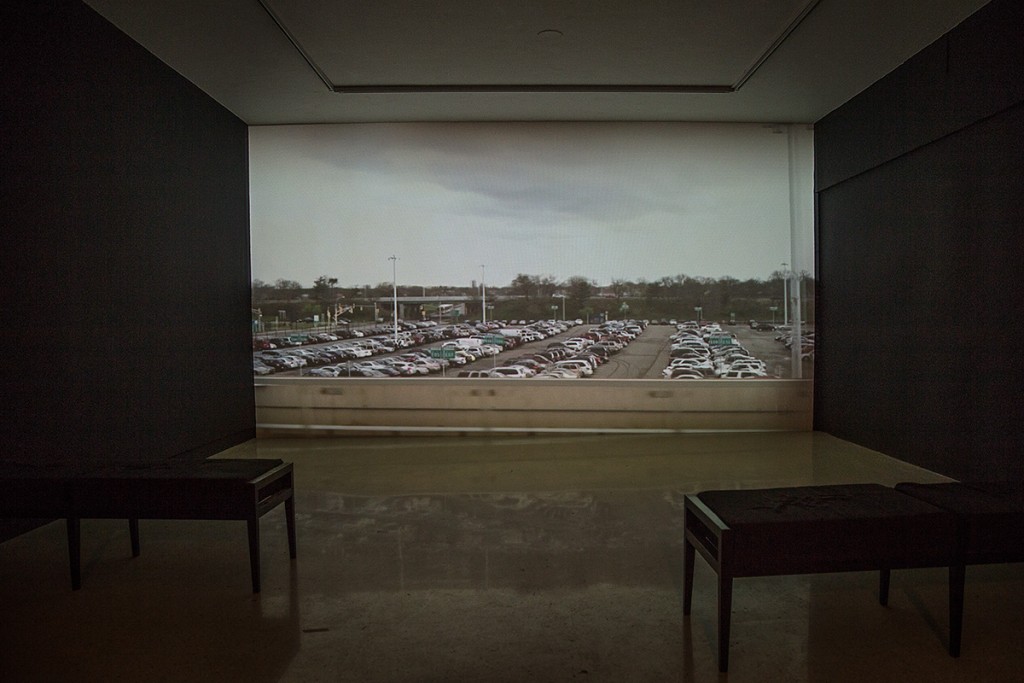 There are two videos as well: The first one, ‘Travel Pictures’ encapsulate the artists’ various journeys from Mumbai to the United States and Europe and so on in a series of fleeting images that on discovery of something fresh and inspiring are interspersed with an evocative background score, symbolic of euphoria and excitement at the chance discovery as well as tragedy, loss and longing at having abandoned one’s home. 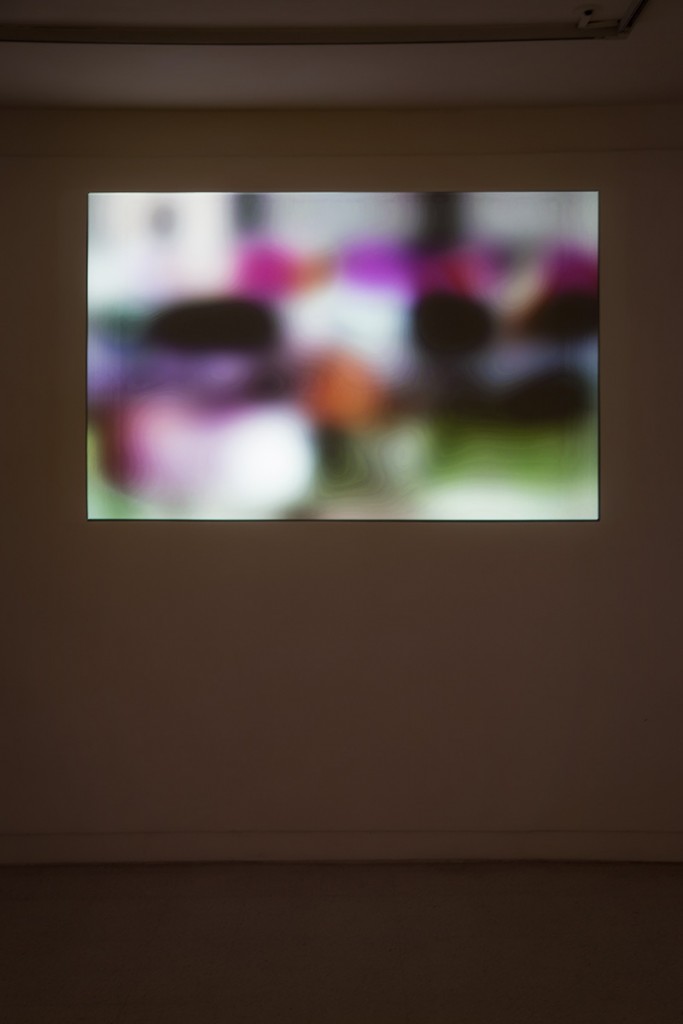 The second installation is a series of images downloaded in those pre wi-fi days when a screechy telephone connection and a wire would take ages to connect to the internet. Entitled ‘All Images Downloaded by the Artist between 2014-15’  in the format of a Single channel video installation, this is a distortion of moving images that are deliberately clouded in order to keep them open to interpretation. 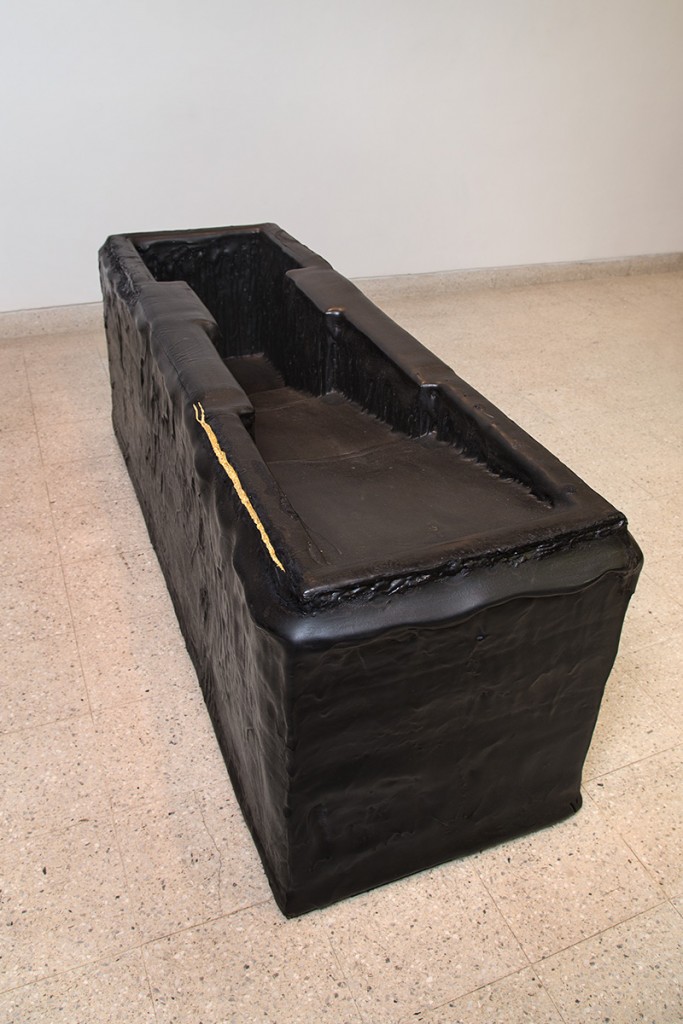 Equally compelling and important are the tar installations of Bijoy Jain, an architect by profession. Founder of ‘Studio Mumbai’, he has worked in the USA and London and has created a magnificent body of work entitled very aptly as the ‘Tar Studies’ sculptures. One wonders why these two artists are chosen together but it is such an interesting curatorial decision that one just gapes in amazement! Both take obscure objects or pieces of contemporary history and weave a magical story with them.

Tar, as one interprets it, is the basic building material deployed for creating roads. It is stark, black and yet malleable and therein lies its beauty. Whilst the sculptures appear basic rectangular pieces of tar, the possibility of what lies beneath is that which engages the onlooker. On close examination of these beautiful and unusual structures, one understands that tar being a natural preservative, according to scientific studies, “Some ancient creatures were even preserved in a pit of tar! Rapid burial contributed to their being preserved as fossils because it protected them from the destructive forces of a terrestrial ecosystem.” 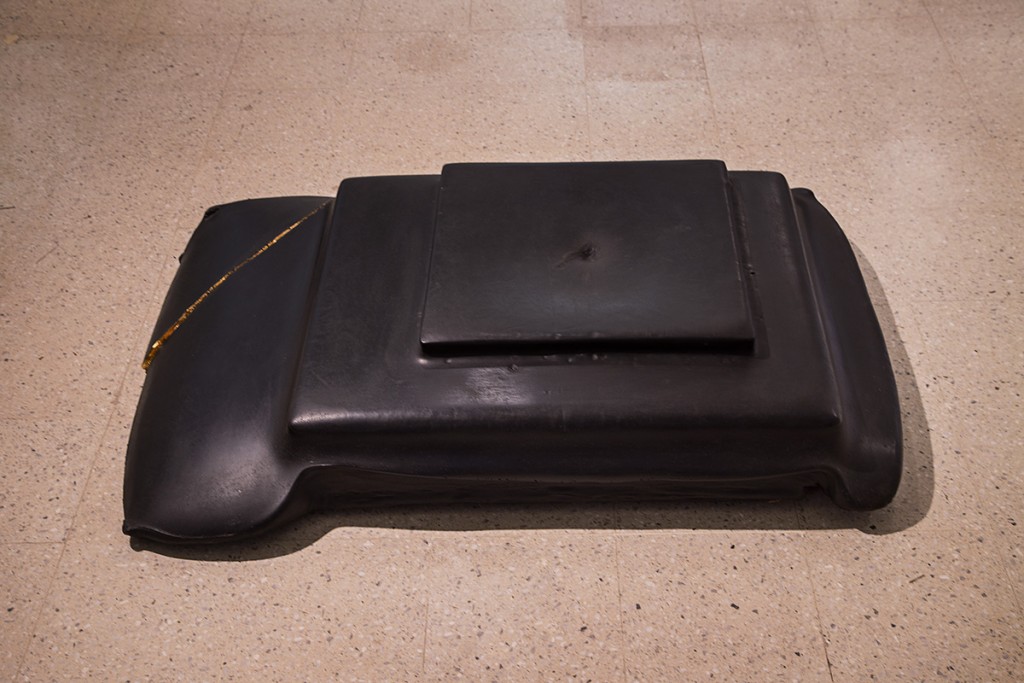 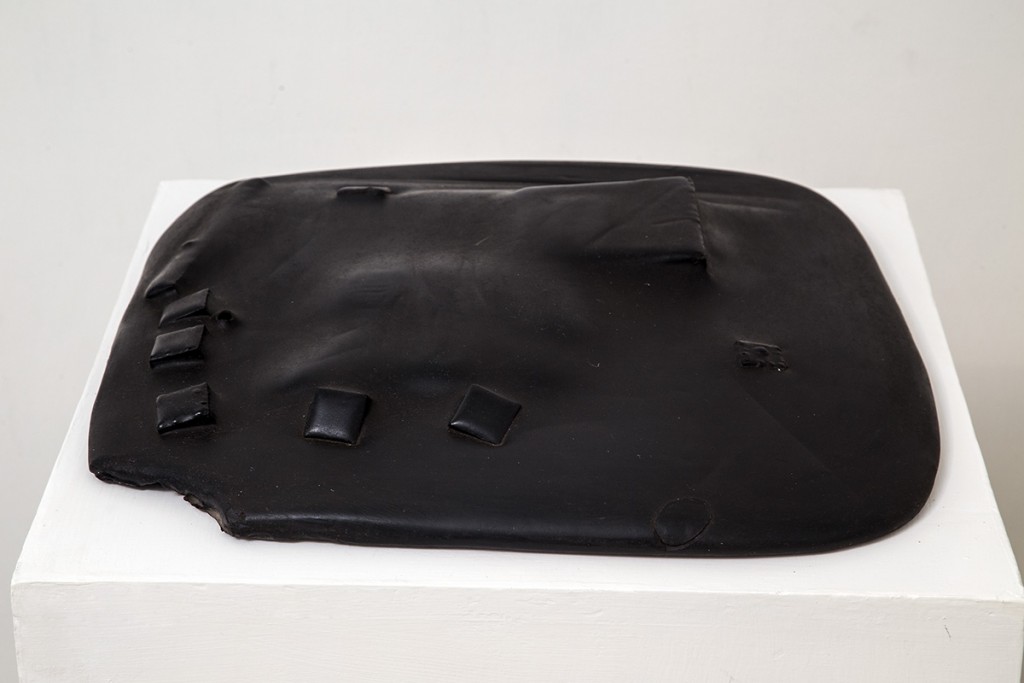 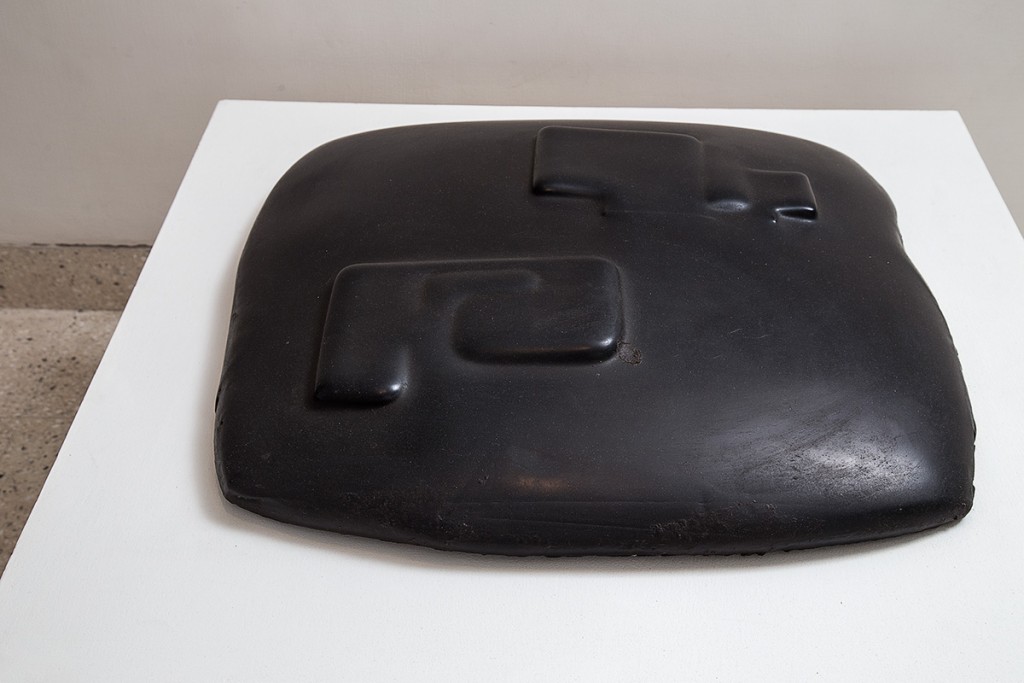 Tar studies “S” “M” and “L” are sculptures which depict some element of preservation and movement that has been captured in these tar structures either from a recent past or a historical memory, centuries ago. Again, the onlooker may interpret the hint of a gold leaf engraving as a sign of hidden treasures beneath the surface. And yes, “S”, “M” “L” are mere indications of small, medium and large sculptures indicating the architect and artist’s no fuss approach!

As the inimitable Haruki Murakami, articulated in the phenomenal ‘Kafka on the Shore’, “Artists are those who can evade the verbose.” Don’t we agree wholeheartedly?!

The exhibition of artworks by Rajorshi Ghosh and Bijoy Jain is on at the Nature Morte Art Gallery at A-1, Neeti Bagh, New Delhi from 12 March to 9 April 2016.