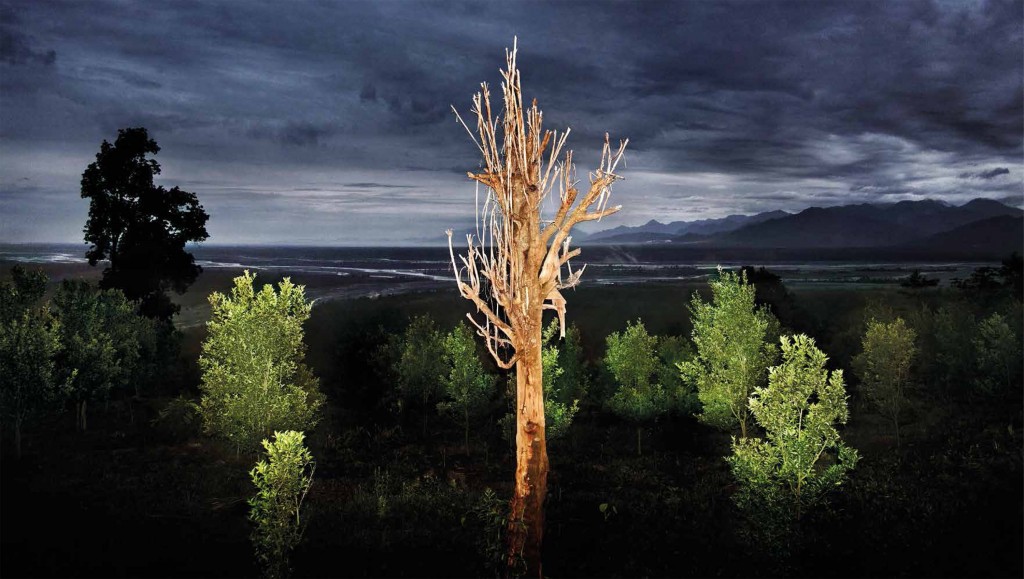 When I walked into Art Alive Gallery, which is currently showcasing one of India’s most iconic photographers, Raghu Rai‘s exhibition “Trees”, the first thing that I see is an image of a golden, wizened tree, foregrounding other green ones, richly moody, gray clouds and a mountainscape. It is a powerful tree portrait, presenting a tree which has most probably been struck dead by lightning and yet, remains standing, exuding a palpable, almost-regal dignity and strength despite or perhaps, because of its decline.

Raghu Rai’s visceral photo-narratives are not unknown to anyone; whether it is his unforgettable images of Indira Gandhi in her final repose or a child soil-entombed in the aftermath of the Bhopal Gas tragedy, these works instantaneously transplant you into the heart of their subjects. Similarly, as he delves into the universe of trees through this collection of tree portraits, you become both aware of his deep regard for trees as well as his invitation to the viewers to appreciate each tree’s innate individuality: its character, eccentricities, and stories.

Why photograph trees? “I am a nature lover and a gardener,” he responds quite simply, mentioning that he captured these images while shooting for other assignments in various places in India and abroad. “They were taken anytime, anywhere, freed from time and space and editorial dictates. I would be walking and travelling around and would glimpse these trees – it was an experience of a different kind.” One can gauge that he shares an intuitive relationship with the trees, conducting a dialogue of sorts with them. “You must have heard that ardent nature lovers talk to their plants; similarly, the trees too communicate with you, articulating through their whispers,” he describes. 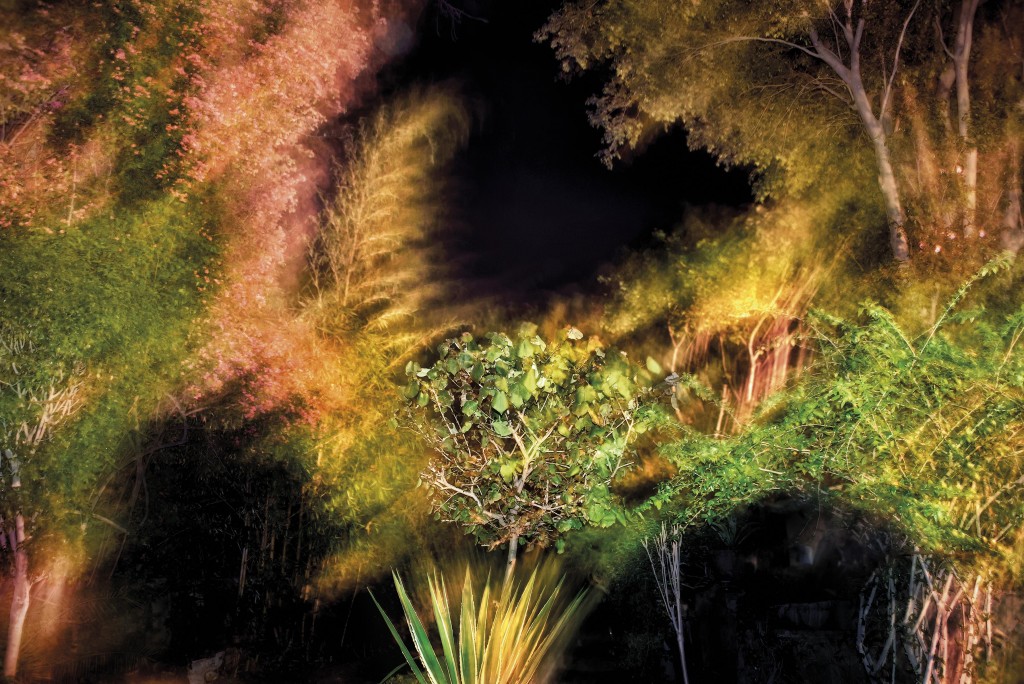 The exhibition is accompanied by a book which features these images; the last section of both the book and exhibition show images of trees captured during a storm – and that too at night. From the distance, it is as if the trees were captured beneath a night canopy of constellations; when you look closer, you realize that what one perceived as stars are in fact numerous individual rain-drops studding the image.

“These images were taken at my farm, which is about 14 km away from Mehrauli and where I do my gardening; I have planted shrubs and saplings of trees from all over India and abroad,” he explains. The convergence of rain and the trees is something which obviously gives him much joy when one hears him speak of it. “I love rain, particularly storms at night. In fact, I would get angry at the rain, saying, why is it that you do not fall and perform for me during the day, making it easier to be captured?” During those fantastic night storms, he would capture the trees armed with a camera which had an in-built flash and employing the long exposure technique; the images produced from those nocturnal storm encounters exude a celebratory feel, the joyous union of rain, light, and trees appearing as fireworks illuminating the night sky. “I captured the trees’ swaying and dance-like movements, delineating the sharpness of their leaves and branches,” he says, describing it as an intense spiritual experience. “My mind literally goes on flight with the arrival of a storm such as this.”

What also emerges from these images as well as the others in the collection is nature’s unfettered and timeless quality manifested in the form of trees. For example, when referring to the organic manner in which his farm has grown, he entirely attributes the landscaping to Nature. “I didn’t do it; it was Nature which was guiding me all along. If you make yourself available emotionally, spiritually, and mentally, the situation speaks to you and tells what it wants you to do for it. It is the most precious part of creativity,” he says. 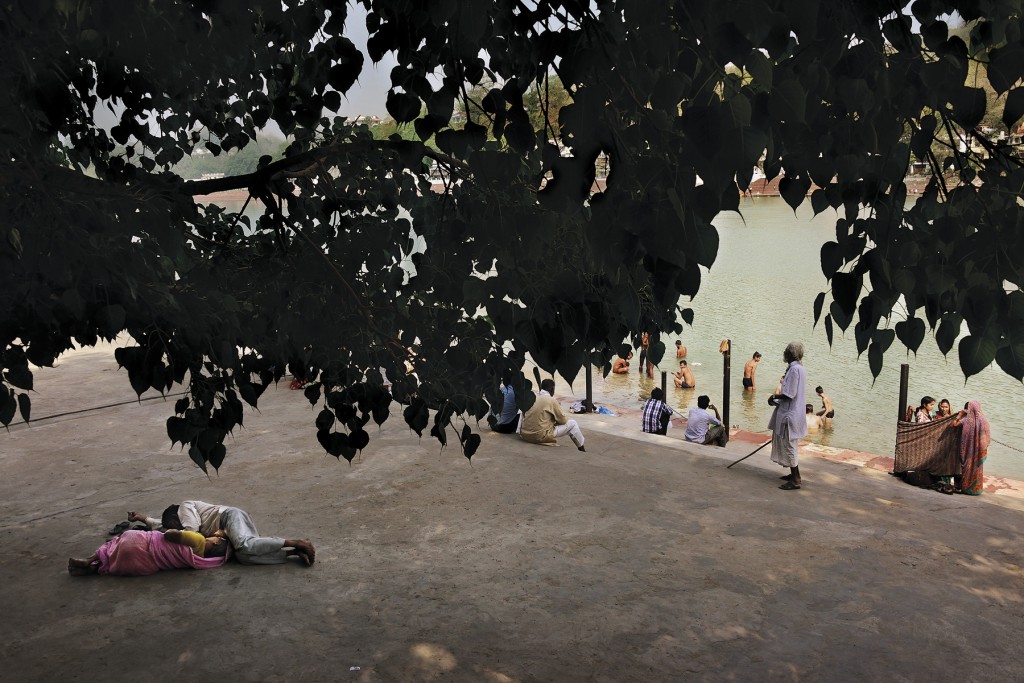 Few images show trees near ghats upon presumably holy rivers, them being witness to those bathing in waters. Would it be too simplistic to reduce the import of the images as presenting the trees emblems of the sacred and divine? “These ‘whispers’ are indeed sacred expressions of nature,” Raghu Rai says. “However, you do not need to show the physical presence or proximity to a temple or shrine in order to represent the trees as divine; they are divine as it is.” 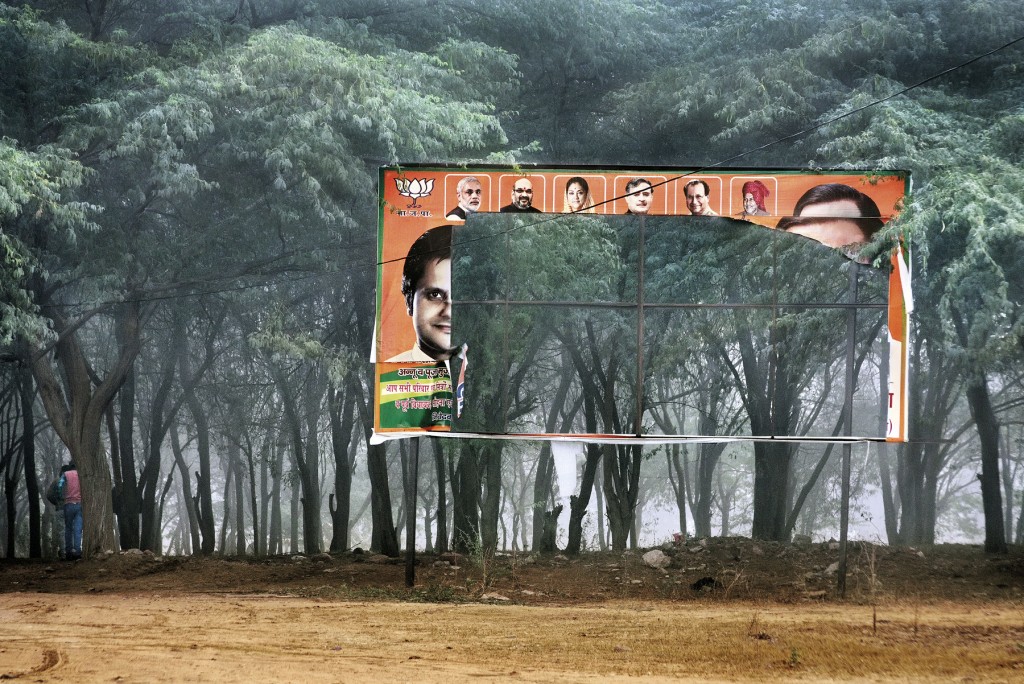 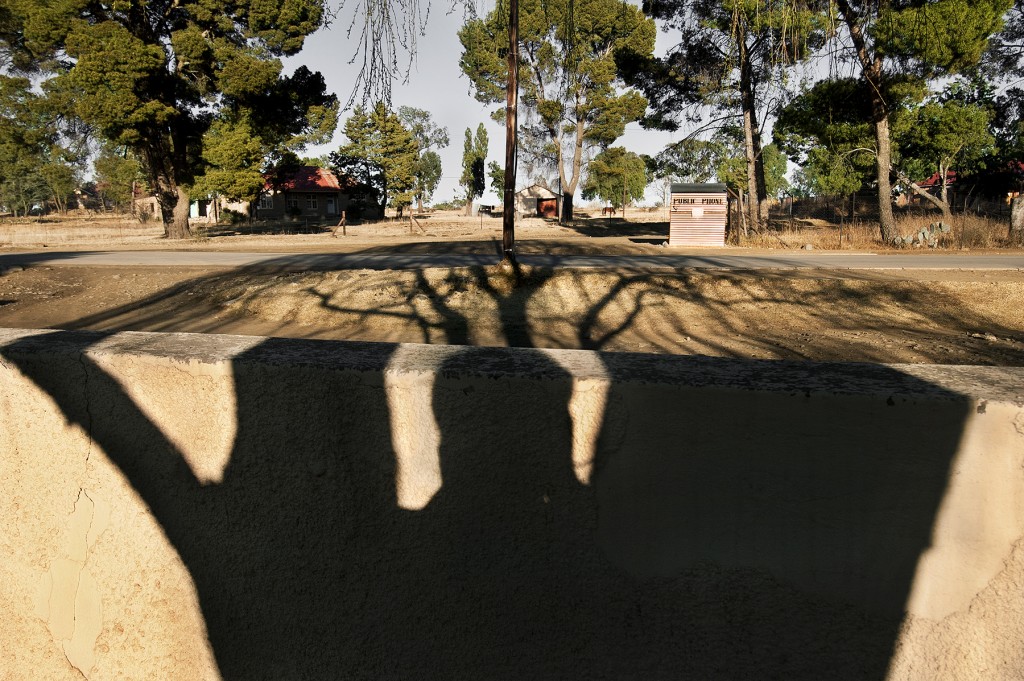 There is also a noticeable absence of titles accompanying the images. “Why should I bind them in words?” Rai asks. “It’s such an enormous experience; I do not want it to be entrapped in words. Rather, I would wish the viewers to create their own stories for each image.” And so, as we glimpse a brightly hued saffron and green BJP billboard, when which cut away, reveals a grid of a green trees on the underside or a tree’s looming, encompassing shadow, rather than the tree itself or the chiaroscuro architechure of one tree’s labyrinthine root-network, we uniquely shape our engagement with each tree and – differently hear each one’s whispers.

One of my favorite Raghu Rai photographs depicts a woman praying inside a room in a haveli while the day dramatically concludes in the cityscape of Old Delhi. The image is simultaneously intimate and sweeping: we are privy to what is arguably a daily affair, both the act of ritual and the sunset performance and yet, the scene is elevated beyond the quotidian, Rai’s vision transforming it into something extraordinary. Similarly, when glimpsing his tree images, I realize that while they are representative of their individual landscapes, they leap out of them as well; they are its central actors, affirming the vital role they play in our immediate visual surroundings, a role which we may be oblivious to or take for granted. It reminded me of a quote I read the other day, taken from a Paris Review interview with the author, Ken Keasey, “There’s nothing worse for a forest than to have all the trees be the same.” In his photographic forest of trees, Raghu Rai presents a whole character-cast of varied trees, asking us to appreciate their beauty and innate strength as well as contemplating how so impoverished the landscape would be in multiple ways in their absence.