The Art of French Fashion

Art is luxury, and luxury is fashion.

Does that mean art is fashion?

Or, fashion is art?

Triangulation of art, luxury and fashion often results in creative and complex outbursts. Here are the three most famous French fashion brands that tap into this realm by indulging in artistic collaborations to invent pure luxury:

Metaphorically, luxury may spring out of fashion’s love affair with art but literally French fashion designer Coco Chanel supposedly had an affair with the famous Spanish artist Salvador Dali. 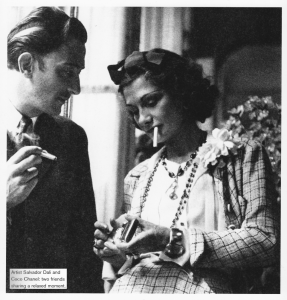 On one hand, Chanel herself operated in the time of surrealist art history movement and, went on to indulge in timeless collections via collaborations with other art legends like Picasso and Stravinsky. On the other hand, Andy Warhol who laid the foundation of the pop art movement got inspired by the Chanel No. 5 perfume bottle and, went for a silkscreen series titled Ads: Chanel. There are no prizes for guessing that this series was eventually used by Chanel not only for their Ad campaign, but for packaging a limited edition to celebrate the 75th anniversary of Andy Warhol.

In recent times, fashion trends seem to originate at the crossroad of luxury and art. For instance, Chanel’s recent Paris fashion week show wherein models walked in high-end luxe products in an art gallery set up that created frenzy amongst lovers of opulence.

Classic collaboration of art and luxury comes across in the form of highly desirable Hermès scarves. It is commonly known that each one of those scarves is a hand-crafted colourful storyboard. Not only does it show tasteful artistic expression but it is designed as a high-end luxury product that’s a priceless grandmas hand-me-down.

It is a long process; the ‘making of an Hermès scarf’. From collaborating with artists, finalising design, choosing the colour palette and, eventually silk screen printing; the whole cycle takes approximately two years. And, yet the Wikipedia page on Hermès claims, “An Hermès scarf is sold somewhere in the world every 25 seconds; by the late 1970s more than 1.1 million scarves had been sold worldwide.”

There is no denying the fact that fashion makes art and luxury en vogue by defining the latest trends. It builds on the exclusiveness of the product in question by making it more enticing. So it is no wonder that the silk square canvases have had quite a bit of fan following, starting from Queen Elizabeth II who’s seen famously wearing one in a 1956 British postal stamp. Audrey Hepburn and Grace Kelly adorned it as headscarves, but Madonna took it a notch higher by wearing it as a wrap-around-top in the movie Swept Away. Other more contemporary fashion icons like Mirana Kerr (whose claim to fame was being Victoria’s Secret Angel) simply prefer to wrap it up in style by adding an aesthetic element to an otherwise dull outfit.

When Marc Jacobs joined as the creative director of LV, he started indulging in artistic collaborations to reinvent brands’ image. Luxury was redefined when he got Stephen Sprouse on board to introduce punk art sensibility to LV products. Sprouse with his artwork gave a youthful makeover to the brands’ image when he did their graffiti logo bags that combined high culture with the low. Later, after the demise of the artist, LV even did a Sprouse memory collection using his words; re-establishing the bond between fashion and art.

Here it may also be argued that somewhere luxury may come across as an emerging business of art, when we take into account Japanese artist Takashi Murakami’s take on reinterpretation of Louis Vuitton logo. And, more recent team up with Yayoi Kusama for their biggest collaboration meant not just playful polka-dotted products, but an entire concept store. Art and artists make for an important aspect of fashion installations or exhibits including show windows. But this particular LV store has a museum-like appeal inside out. It may be a fair assessment to say that similar to an art gallery, the luxury brand lures customers to check what’s on display with its art deco; making it a perfect marriage of art and fashion that births luxury.