The Best of My Artist My Way 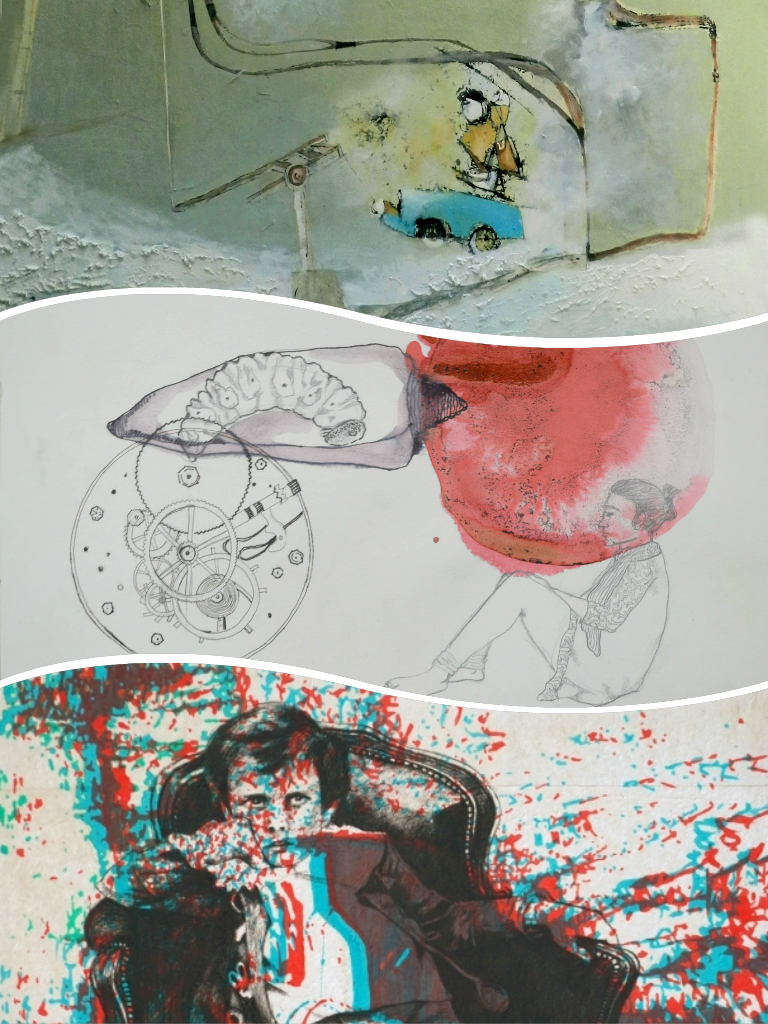 On the 30th of June the My Artist My Way contest, announced towards the end of May, came to a close with over 90 entries from art students and enthusiasts all over the country. The main purpose of the competition was to encourage interaction and familiarity with artists, artworks and mediums. We activated all our social media handles on Facebook, Instagram, Twitter and Google+ and received great response from some really talented young artists.

The selection of the best entries was made based on how closely and imaginatively were the contest guidelines followed, how did the contestant engage with the artist, medium or motif he/she is inspired by, the aesthetics and skills of the artist and the concept note submitted by them along with their works.

It was rather difficult to make this selection because some of the entries were truly inspiring. We congratulate all those who sent in their entries for the work that they are doing.

So here is the best of what we received.

The power to utter the visual language in a public space and the power to develop private spaces of his own within that public sphere is what inspired the most about Banksy. The powerful satire through his visuals adds another layer to his work. All these inspired her to create some undefined alienated land within her canvas and add the public spaces images drawn by him. She has drawn these lands partly and all these lands are the part of a huge vacuum in which we live. The figures may have added the reflection of our social selves but she felt that these images create a dual essence, the presence of “unknown” and “existence”. These words have many layers of importance in our lives. As for, we exist but do we exactly who we are? 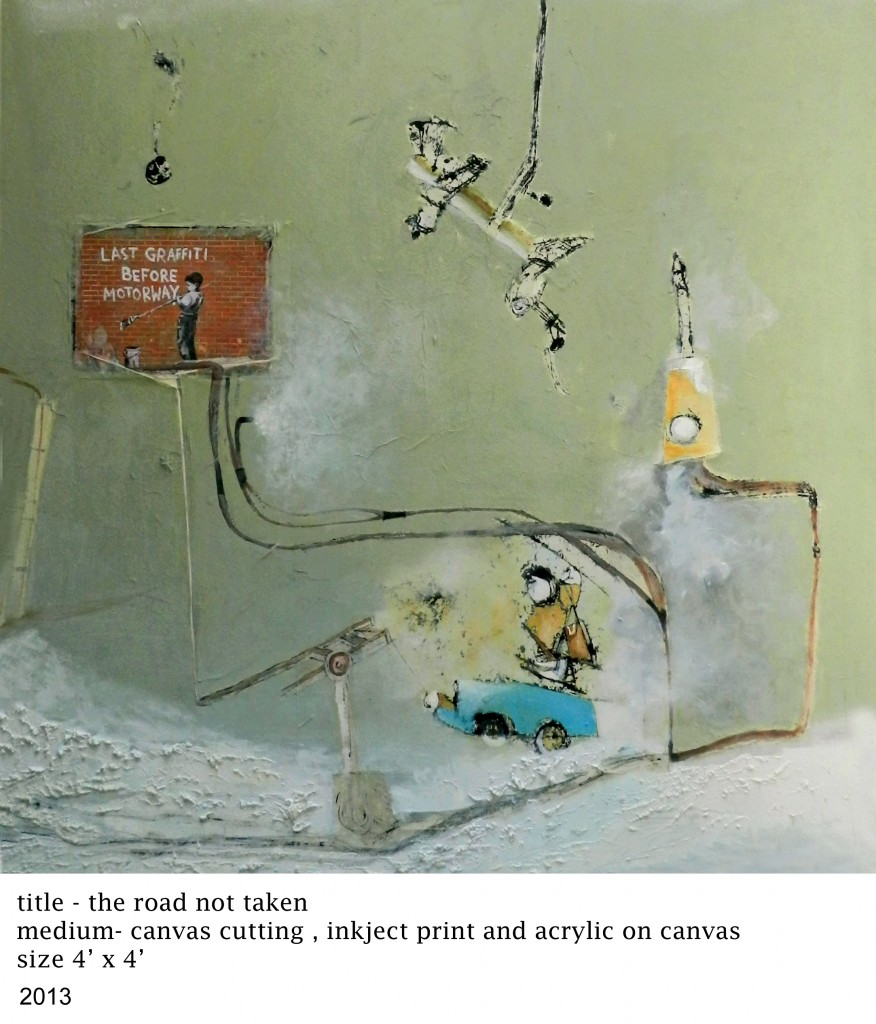 The blurred lines, the half smudged figures, 3D colours and figures fading in a landscape are inspired by Francis Bacon. They are unsettling reminder of the completely alienated and twisted psychological state of humanity that lies hidden beneath our daily delusions.

He called his landscape works as futuristic landscapes because he believes that there is a fear and vulnerability in all of us. 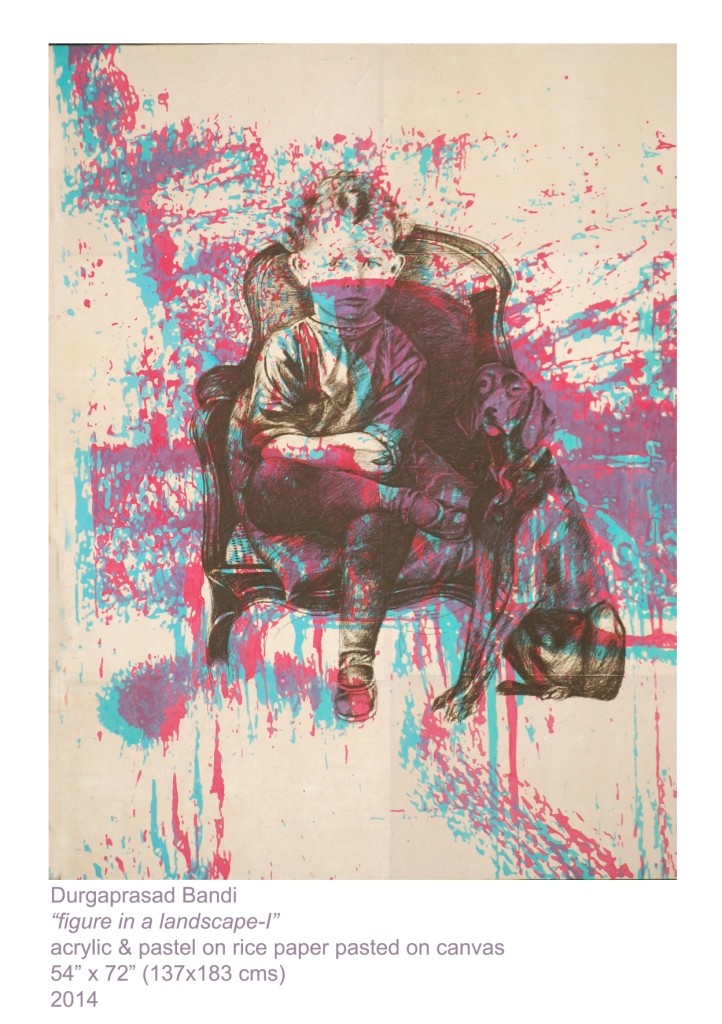 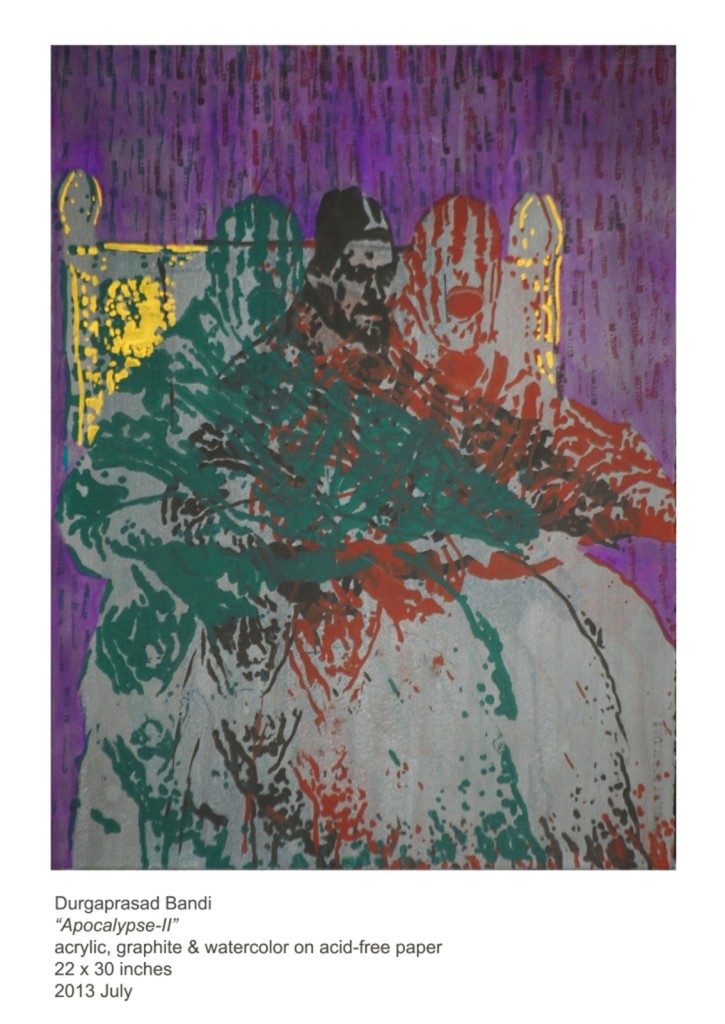 More works that we loved.

Her works are responses of a woman and her position in the society in contemporary time. They are inspired by Mithu Sen, whose works speak about her private sense and subjective experience of her own gender, for which the biological representations of animal and human body parts often appear. She has also used some biological drawings of cells of flowers, leafs and insects, with accidental effects of ink and brush works to reflect the problematic state of a woman in the society. Her works are mostly the projection of her anxiety, depression, and experience as a woman. 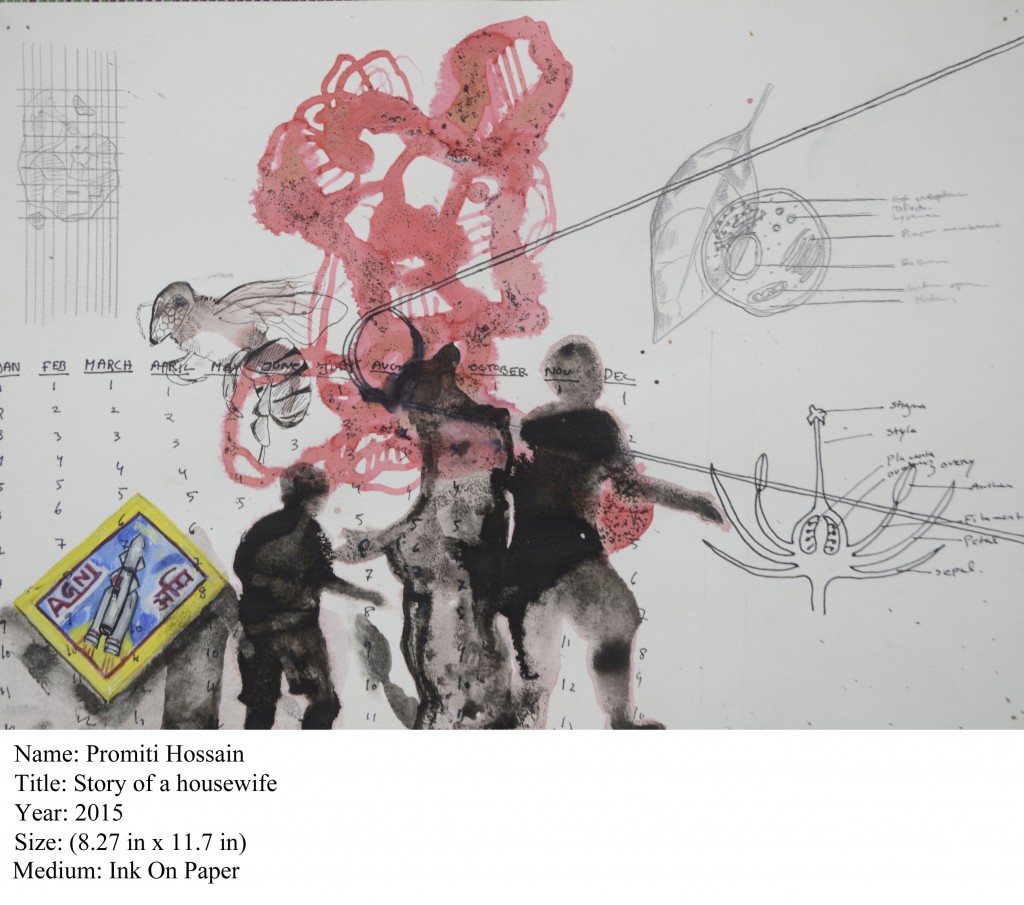 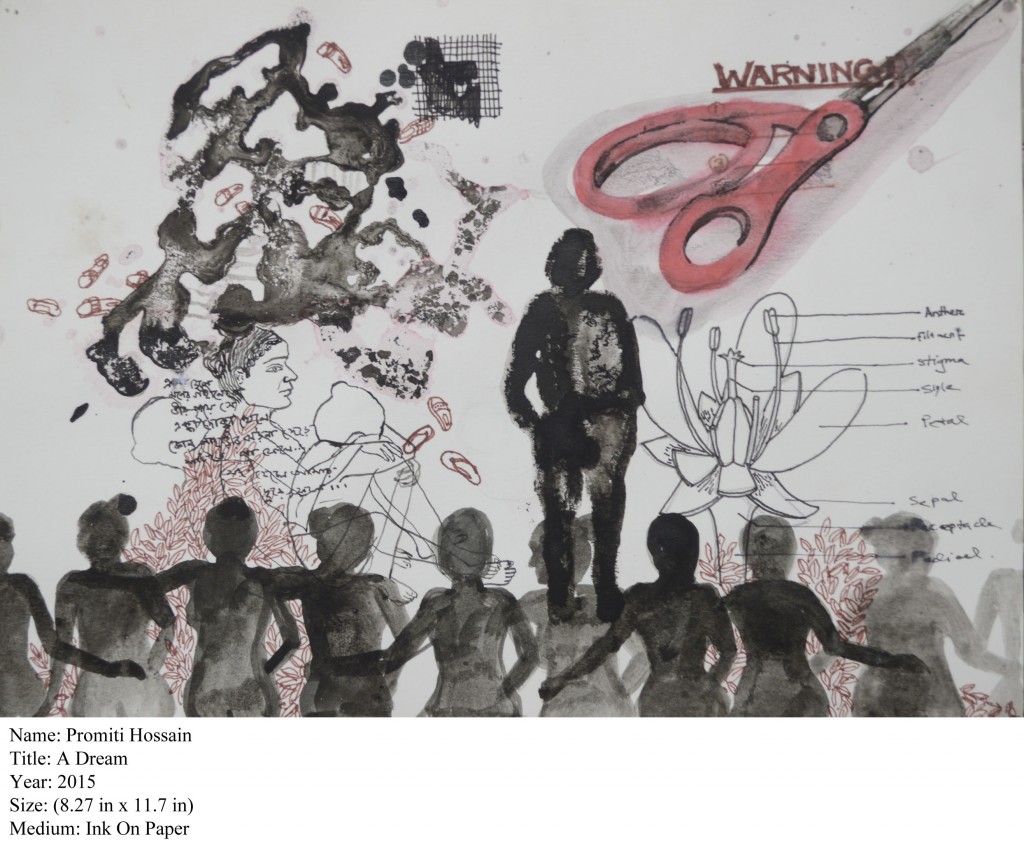 The urinal has a history as a utility object as well as an art object. Often it is seen that we ascribe symbolic value to objects by way of art, yet continue undermining their importance in everyday life. Conversely, we end up undermining the value of the art object as well. This is a reflection of our culture and attitudes. His installation attempts to raise questions about how much of a civic sense we have with regards to our surroundings, and how much of reverence do we have for our art objects. For this work he has used Marcel Duchamp’s Fountain. 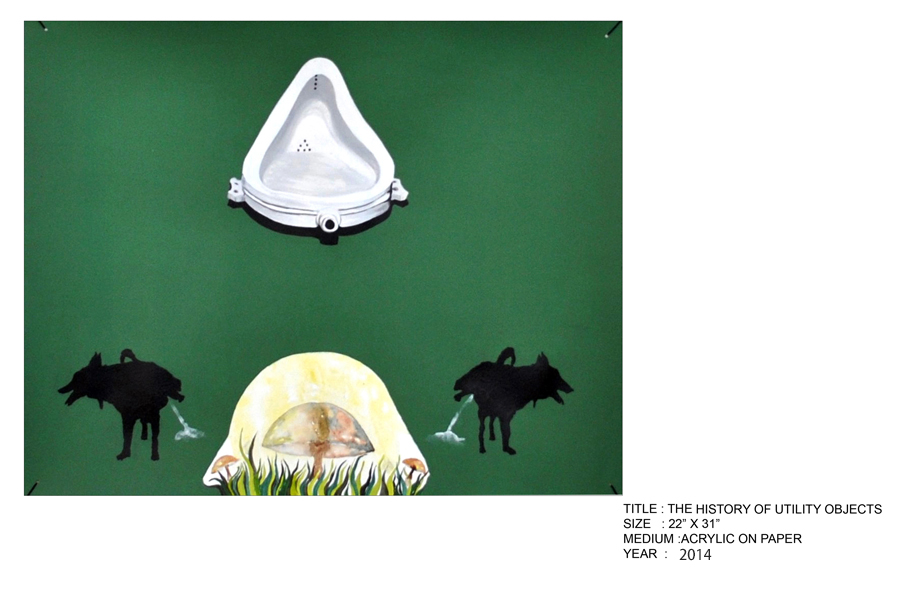 He took images and objects from De Chirico’s paintings and digitally collaged them and distorted them to create landscape. He then worked on that print to create a two-layered landscape. Through this work he has tried to interpret Chirico’s space in a surrealistic absurdity. He likes to create an unstable ambiance that stands the metaphor of crisis of our own time. He adds absurd figures to his landscapes which are wearing costumes of superheroes to symbolize for the hidden distorted desires of our own. He paints from experience of daily life and is much influenced by surreal literature and science fiction movies. 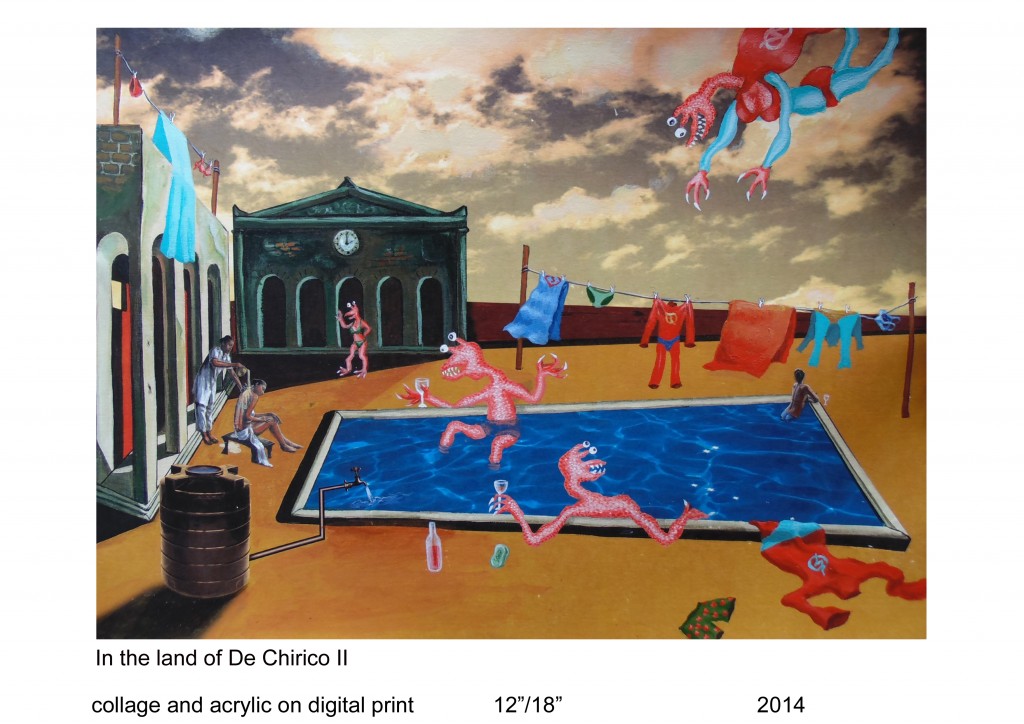 In this series of work he has used the daily newspaper. Within these newspapers, there are submerged images of the works of the famous artists like Goya and Frieda Kahlo throughout the world who inspire him. These images are also of the sociopolitical issues that the artist used to face in their time. Newspapers being a globalised media he attempted to brings artists from around the world together in this space. 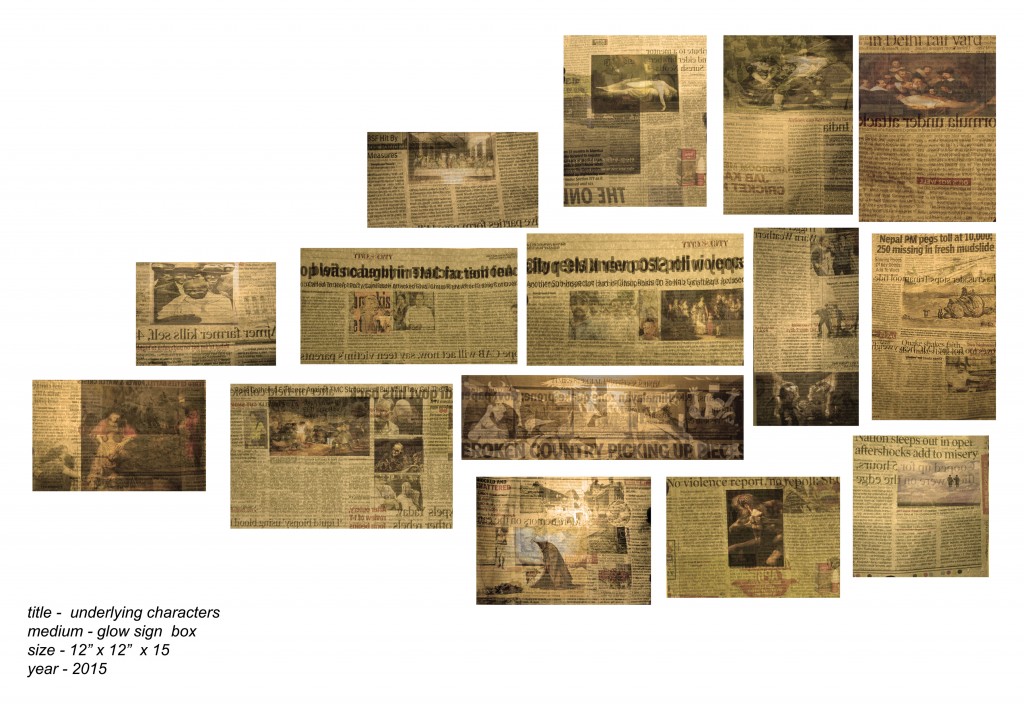 Watch out this space for more works of our winners.