On 17 September 2015, Goa-born Indian artists Francis Newton Souza’s spectacular painting Birth was sold at a phenomenal $4.08 million at the Christie’s auction in New York. The painting that depicts a pregnant nude woman is reportedly his partner Lisolette, who gave birth to three of his children.

Interestingly, the same painting was bought at one of Christie’s London auction, for $2.5 million in June 2008 by industrialist Anil Ambani’s better half, ex-Bollywood leading lady, Tina Ambani for the Harmony Arts Foundation run by her. Ironically, the artist had to struggle in his early days as a painter and after his death in 2002 has become the country’s “most expensive artist.” Birth was created by him in 1955 and it is considered one of his best works. In fact, his work got much recognition after the publication of his autobiographical essay Nirvana of a Maggot, published in Stephen Spender’s Encounter magazine in 1955. 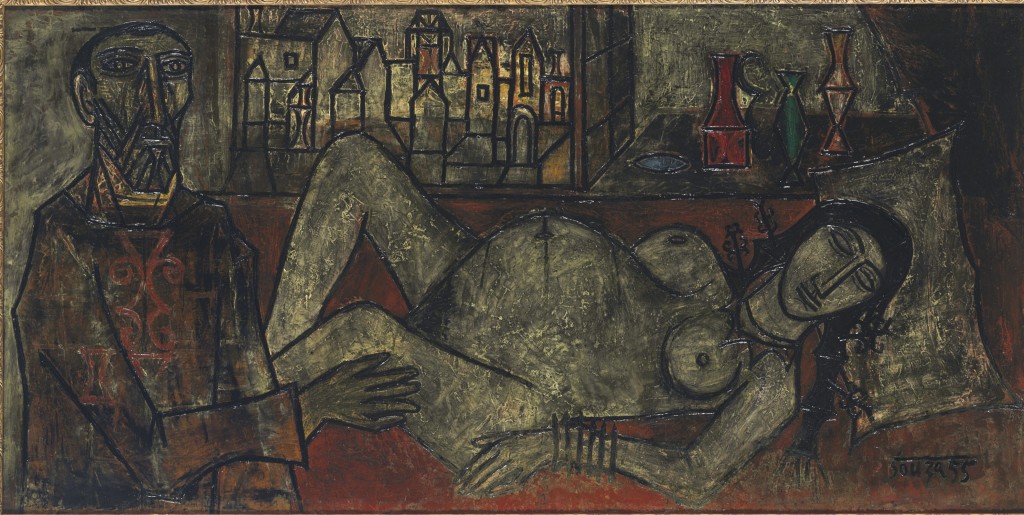 Christie’s international head of world art William Robinson said, “It achieved a world record for any Indian work of art sold at auction. Considered to be one of India’s greatest abstract painters of all time, Gaitonde’s untitled painting from 1995 had also broken the previous record of $4.01 million paid for a Francis Newton Souza work at a sale in New York earlier in 2015.

Reportedly, this piece was purchased by an anonymous ‘international collector’, and the total value of the sale, which included 100 lots, was 980 million rupees. “It is the highest total that Christie’s has ever achieved in India and that beats our previous record for the highest sale ever in India,” Robinson concluded.


And breaking all previous records set by Indian artists at an auction ever, Akbar Padamsee’s ‘Greek Landscape’ fetched a record Rs 19.19 crores at Saffronart’s sale on 9 September 2016. Hugo Weihe, auctioneer and CEO of Saffronart opined in a statement: “Padamsee’s ‘Greek Landscape’ trumped all expectations. The 4.3 x 12 foot canvas, estimated at Rs 7-9 crores, doubled its upper estimate. The winning bid surpassed the previous world record of Rs 9.3 crores, set by Sotheby’s in 2011 for ‘Reclining Nude'(1960).”

Titled as “Greek Landscape”, the painting on a 4.3 X 12 foor canvas was estimated to be sold Rs 7-9 crores, however, it doubled even its upper limit!

Padamsee’s awe-inspiring work was one of the four “works in grey” to be offered at the auction, and it featured an imagined cityscape in the 1960s, rendered “in a palette of varying intensities of grey and is believed to have established him as a master.”

“We are thrilled with the world auction records we set. The sale provided a greater spectrum of Modernist works, and works rarely seen at auction were well received. We were also gratified by the interest shown by international collectors,” Weihe concluded.

As the great Pablo Picasso had once commented, “There are painters who transform the sun to a yellow spot, but there are others who with the help of their art and their intelligence, transform a yellow spot into sun.” The difference lies indeed in the eye of the beholder!