The Cultural Debt owed to Greece 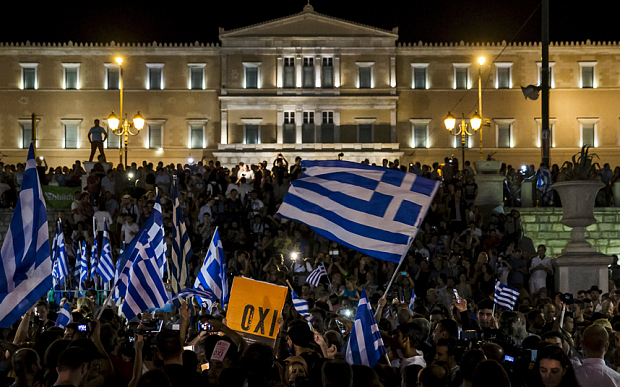 With the Greeks voting No to austerity and the national humiliation that came with the terms of the international bailout and the consequent celebrations of pride and dignity that took place in the country in the face of a debt of billions of Euro, it got me thinking of the thousands of years of history, philosophy, art and culture that we owe to Greece.

Neoclassicism is an art movement that drew inspiration from antiquity and the “classical” art and culture of Ancient Rome and Ancient Greece. Neoclassical sculptures, mainly inspired from Greek sculptures, prized naturalism in depiction of human bodies making every sinew and muscle life-like, restraint in expressions of pain, agony or ecstasy. One of the most iconic Greek statues is that of Laocoon. Neoclassical paintings are best known for their austere linear design, depiction of classical mythologies, characters and themes and historically relevant costumes and settings. This trend also influenced fashions and hairstyles across Europe and especially in France.

While Greece owes a lot of money to countries listed below, here is a look at artists who have been inspired by the Grecians from these very countries and the cultural capital that Greece continues to take pride in.

A German art historian Johann Winckelmann is seen as the sole instigator of the Neoclassical art movement inspired as he was by Greek and Roman art and especially Greek sculptures. The earliest painters of the neoclassical school were centered around Winckelmann and Anton Raphael Mengs. Mengs borrowed from classical mythology and aesthetics and also from Renaissance artists like Raphael. Mengs et al were interested in the ideal form.

Another German keenly interested in Greek art and literature was Johann Wolfgang von Goethe, a writer and statesman, who contributed immensely in the revival of the Greek tragedy. His most popular work is Iphigenia in Tauris which is reworking of the ancient Greek tragedy by Euripedes.

A more rigorous school of Neocalssical art emerged in France with painter Jacques-Louis David who was more fascinated by narrative painting unlike Mengs who was more interested in ideal forms. Simplicity, austerity, heroism and stoicism were celebrated as can be seen in his painting The Death of Socrates. This painting represents a great sense of gravitas of posture and form, flowing drapes, both of which are common to Greek sculptures.

It was difficult to not be inspired by Hellenistic sculptures due to their abundance and French sculptor Jean-Antoine Houdon who is famous for portrait busts and statues of eminent men like Benjamin Franklin, Voltaire, Thomas Jefferson and George Washington. He did not sacrifice personality and naturalism of form to idealism.

Italy has a rich history of art due to the cultural exchange between the Ancient Greeks and Ancient Romans dating back to over two hundred centuries. With the Classicism of artists like Giotto there came an emphasis on realism and naturalism of representation.

Raphael’s The School of Athens is a painting influenced by classical Greek and Roman models portraying the great Greek scientists and thinkers. It is a tribute that the artist pays to the Grecian and by placing them amidst classical Roman arches, he also draws attention to their relevance in his times. This fresco can be found in the Apostolic Palace in the Vatican City.

The influence of Greek sculptures on Bernini cannot be denied. Bernini is famously known to have created the Baroque style in art but the gravitas of form, poise and grace of figure and naturalism of body in his sculptures make obvious the influence the Greek aesthetics had on him. His life-size Baroque sculpture Apollo and Daphne is undeniably one of the most sublime works of art. In this retelling of the mythological tale of Apollo’s unrequited love for Daphne and hers transforming herself into a tree to save herself from him.

Neoclassicism was imported by Charles the third in a process of beautification and urbanisation of Madrid. During this period various monuments and iconic structures were constructed inspired by Greek architecture including the Museo del Prado, the Spanish national museum of art. It was designed by architect Juan de Villanueva. He used Doric and Corinthian columns and arches inspired from Ancient Greek temples abundantly.

This is the entrance to the Velasquez wing, one of the most eminent artists at the Spanish court. He too depicted Greek mythology in the most fascinating way. He portrayed Greek mythology of the Arachne, a mortal, who dared to challenge goddess Athena to a weaving competition. In the painting Las Hilanderas the female spinners in a tapestry workshop are in a competition, Athena disguised as an old woman on the left and Arachne on the right. In the background is visible the finished tapestries. The one visible to us is Arachne’s and it depicts another Greek mythology- The Rape of Europa, in imitation of Titian’s painting.

This painting in itself is an allegory of the nature of inspiration for artists as it is derived from various sources and in this case the Greeks.

In the 16th century Netherlands sculptors like Mathieu Kessels made sculptures inspired by Greek aesthetics but it is artist Pieter Bruegel the Elder who painted the one of the most iconic paintings Landscape with the Fall of Icarus which has been referred to various consequent works of literature and popular culture.

In Greek mythology, Icarus flew with wings made by his father Dedalus, using feathers stuck together by wax, too close to the sun despite his father’s warnings. Due to this the wax melted, the wings came apart and Icarus fell and drowned in the sea. In this painting, Icarus is rendered obscure in the right corner of the painting and can be made out only with the splash and the legs sprawling. Bruegel mastered paintings depicting ordinary peasant life and even in this depiction of the Greek mythology focuses on the ordinary people who hardly cared if Icarus fell or flew.

Benjamin Franklin, Thomas Jefferson and George Washington all had portrait busts made in the neoclassical style by Houdon but Hellenic influence spreads wider than that. We all remember the neoclassical architecture Howard Roark in Ayn Rand’s The Fountainhead rejected for modern designs. Neoclassicism was an expression of American Renaissance in architecture in late 19th and early 20th century. The Lincoln Memorial, the National Gallery of Modern Art and the American Museum of Natural History’s Roosevelt Memorial are all designed with Doric and Corinthian columns and patterns inspired from Ancient Roman and Greek architecture.

An American popular culture usage of Greek mythology has been in the Percy Jackson and the Olympians series which have also been made into successful films. Our popular culture is abundant with references to all things Grecians most famously the Cupid.

In UK, the Neoclassicists, Pre-Raphaelites and the Romantics were all influenced by the Grecians. Painters like Walter Crane, Frederic Leighton and Edward Burne Jones found inspiration in Greek aesthicts and mythology. Crane narrated these tales as illustrations of children’s books, Jones, a pre-raphaelite, used the ideal form and drapery of Grecian sculptures and Leighton produced his most magnum opus Flaming June which alludes to the figures of sleeping nymphs and naiads that the Greeks often sculpted.

In Belgium the Greek influence can be seen in both art and architecture. Various churches, abbeys, hotels and public buildings stand in the grandeur of Doric and Corinthian columns and arches. In art the two famous painters who used Greek aesthetics and mythology are Peter Paul Rubens and Francois-Joseph Navez. Navez trained under the French Jacques-Louis David and shows his influence. Rubens, however, was an important member of the Flemish Baroque movement and believed that history paintings that had for its narrative biblical, mythological, classical and historical tales were of the highest value. In an intimate portrait of his wife Helena he bases her figure partially on Greek sculptures of Venus Pudica and Medici Venus.

Two sculptors from Austria are most popularly known for drawing inspiration from Greek Sculptures. Franz Xaver Messerschmidt and Franz Anton von Zauner both created neoclassical sculptures, the former known for his portrait busts and the latter for classical figures. Zauner was initially influenced by the mannerists but rejected it for its superfluity and turned to neoclassicism under the mentorship of the German painter Mengs.

Zauner’s sculptures can be found in various public spaces in Austria and Europe. Caryatids are sculpted female figures in Greek sculptures which are used as architectural support and serve as columns.

Lastly we come to the country to which Greece owes the least, a little more than three and a half billion Euros. In Finland, the influence of neoclassicism can be seen in the architecture. In the mid-eighteenth century architects like Louis Jean Desprez, Carl Ludvig Engel and Charles Bassi changed the urban façade of the capital. They designed various churches, the Senate Square, Helsinki University and various prominent buildings. Johan Sigfrid Siren is best known for the Eduskuntatalo where the Parliament of Finland meets. In this he combined the Doric columns with modern aesthetics rejecting the arches and the Palladian architecture.

The herculean cultural debt is as we have seen most visible in the field of art and architecture. Artists have been inspired by Greek mythology and aesthetics both in art and architecture and art movements like Classicism, Neoclassicism, Renaissance, Pre-Raphaelite, and Romanticism too are inspired from Greco-Roman culture. The Doric and the Corinthian columns can be found far and wide, its influence even visible in Lutyen’s Delhi. Greek mythologies of the gods and goddesses of the Pantheon have been rendered in sculptures, paintings, drama, movies and popular culture and Greek tragedies have provided catharsis to generations of men and women.