India has been well known for her textile industry right from the ancient days. One of the varied textile techniques which have been in existence for quite a long time is the temple hangings. Falling into a totally different category, as their use is not functional in the ordinary sense but rather it is to enhance the beauty of the deity and the inner sanctorum of the temple where it is hung or used, these have been popular right from south India to the northern parts of the country. Their main intended function is didactic or story telling rather than decorative. 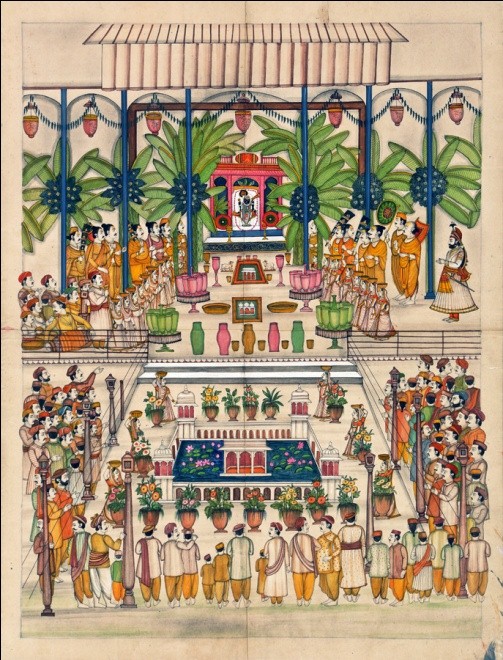 Deriving their influence from local wall paintings, in style and subject matter, they are almost like murals on cloth. Some perform their function simply and directly surrounding a central image of the god with a series of small pictures which unfold a religious theme. In the more sophisticated example, the artist expresses his story through the evocation of a mood. While temple hangings can be found in many parts of India, the ‘pichhvais’ of Rajasthan and Gujarat are the most beautiful examples of pigment paintings. They are the temple hangings of the Vallabhacharya Sampradays, a Krishna sect founded in the late 15thc.This sect follows the doctrine of ‘Pushti Marg’ emphasizing that salvation comes from God alone. The worship of Krishna takes place in private temples which are designed like palaces unlike the normal temples. The shrine is often decorated with ‘pichhvai’ paintings. The main cloth hanging which is suspended behind the image and acts as a backdrop for the image or the stage is the ‘pichhvai’. It is because of their position in the temple that they get the name ‘pichhvai’, or something which is at the back. They are coordinated in theme and designed to create the appropriate atmosphere for a particular season or festival. 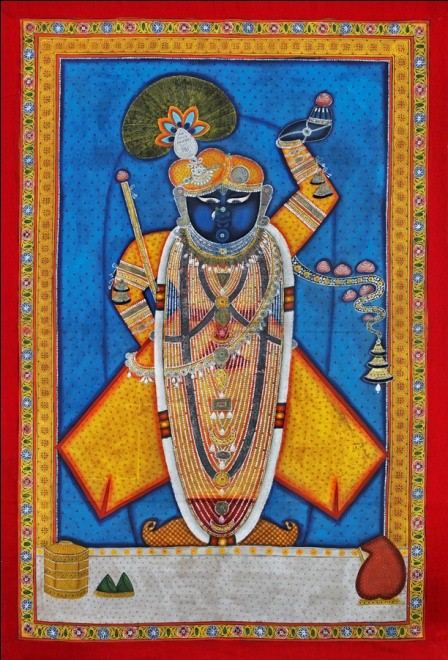 Himanshu Verma of ‘Red Earth’ brought to the city an exhibition of  ‘Pichhvai ‘ paintings, titled ‘Visual cultures of Shrinathji’ which was recently held at the Alliance Francaise at Lodhi Road, New Delhi, from 8-14 August. The exhibition presented historic and contemporary works of art, (cloth ‘pichhvais’ and works on paper) of different styles and techniques mainly from the city of Nathdwara where this form of painting is still preserved and it flourishes. From an 80-year-old original ‘pichhvai’ painting from Nathdwara to a recently made one, the exhibition lent itself to a variety. The works were serially arranged from the first painting which depicted the map of the Nathdwara shrine which is designed like a palace unlike the normal temples. As Himanshu informed, this painting was made to order to look like an old painting and is a fake to educate people how they can be fooled easily. Sketchbooks of artists who practice this form of painting were also displayed followed by preparatory sketches where one could see that artists used to make two or three sketches showing the characters in different postures before they finally decided on the right one for the final painting. Besides this was displayed a beautiful painting titled ‘Phoolmandali’ ka manorath in the month of Chaitra. This painting had a canopy of flowers in the top panel with the god painted in yellow. A lace painting titled ‘Jal vihar’ in white could also be seen which is generally displayed during the summer months. A water body with boats depicted on it gave the painting this title. The ‘kamalan ki pichhvai’ was another beautiful one which depicted many blooming white lotus flowers with a tinge of red on the tips.

On the floor were displayed some kitsch items on the pichhvai themes made for the present day market, but nonetheless providing a charm to the overall display. As one crosses to the other side of the gallery, a ‘Janmashtami’ painting of Krishna with the usual peacock feathers was displayed followed by three paintings of ‘Annakoot’ festival. These paintings were about 60 to 80 years old and they provided a combination of white, bright red and a predominantly green painting. In all the three paintings, a mound of rice (anna) could be seen being offered to the god and thus the name ‘annakoot’. There was also another painting which had a winter based theme with the Lord wearing a thick jacket and a hearth featured at the front panel of the painting. There were also ‘pichhvai’ paintings with embroidery and brocade style; the embroidery paintings showed the Lord playing the flute with the gopis dancing on either side, while the brocade didn’t seem to have any specific theme.

One of the interesting parts in the exhibition was a group of paintings titled as ‘Bazar paintings’ which are being sold in the market at Nathdwara. These had Krishna placed in a modern day hill station or a forest and also some works done like ‘patachitra paintings’ with flat colours. 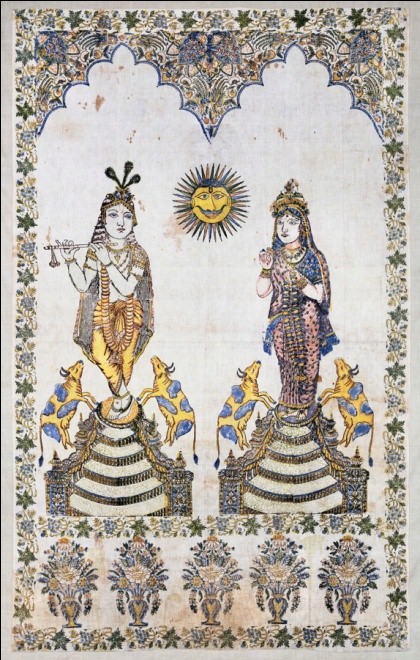 There was also a painting titled ‘Radha Krishna’ done in block printing method using vegetable dyes and two more paintings on the theme of ‘Sharad Purnima’ one of which, was an old one. Himanshu has also displayed an old ‘pichhvai’ whose pigments have peeled off leaving only the bare sketch of the painting.

A lot of hard work had gone into putting up this exhibition which was also educative and worth visiting.