When Artists Re-imagined the Urban Space and Boundaries | A Review 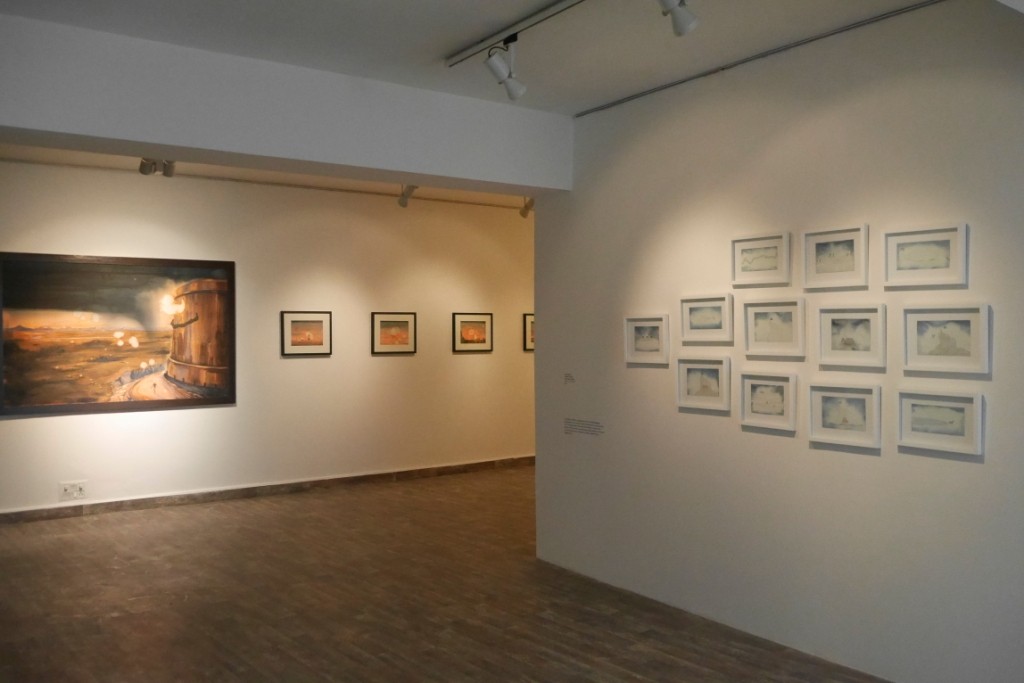 The current exhibition at latitude 28 gallery “The Lay of the Land: A Work in Progress” curated by Anushka Rajendran is a group exhibition featuring art from South Asia. There are 14 participating artist from across borders who intend to survey disjuncture through aesthetic projects to poke holes into the geo-political imaginations of Sri Lanka, Pakistan and India. Self admittedly a work in progress, this show looks at charting individual works that are subjective reflections and critiques of social contexts. This project is not a complete but an ongoing dialogue of the lived realities that reveal political borderlines and maps as empty constructs and inadequate representations of experiences.

As the Curator puts it, “In the context of South Asia with histories of colonialism, ethnic divisions, communal tensions, marginalization, border disputes, living indigenous traditions whose needs and demands contest impositions of political power, language politics and centuries of conquests and border fluidity, maps have been imposed upon maps. Such projects are often carto-histories or carto-biographies written by agents of power. Lived experience of these inscribed spaces present an entirely different vocabulary of social relations, cultural differences and particularities, unfamiliar landscapes and ever quotidian symptoms of political and diplomatic relation. “The lay of land”, a phrase with origins in cartography has expanded to mean the way things are in a specific informal cultural context, appropriately captures this intent in this exhibition. 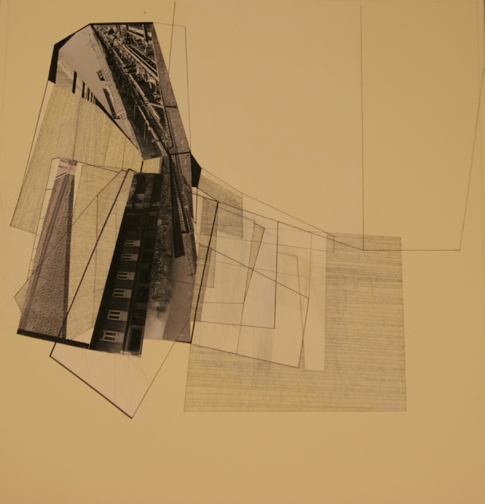 Niyeti Chadha (b. 1979), a graduate from MSU Baroda in Printmaking is pre-occupied by the transient topographies of the urban spaces – ever climbing skylines, buildings under construction and the whir that entwines them. Niyeti prefers to carve out the space in black and white. Her abstract works enmesh these various geographies, often hyperbolically, giving primacy to the experience of these landscapes and necessarily escape fidelity to actual architectural spaces. 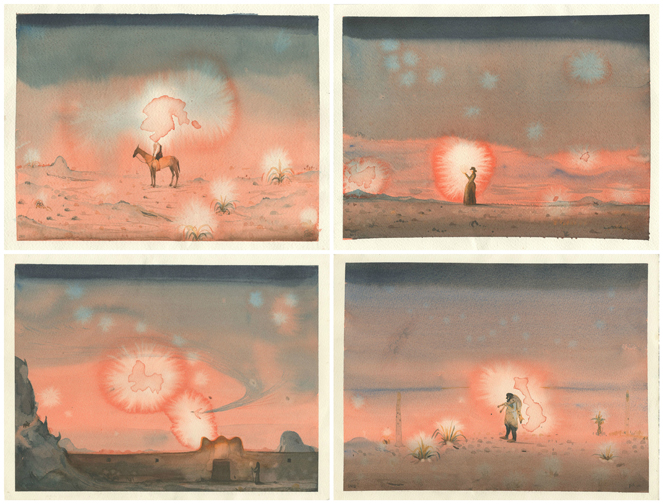 On the other hand, the urban panoramas and their haphazard growth and deterioration are the references that drive the impulses of Sujith S.N.’s works, who lives and works in Hyderabad. In Stains of Stimuli, displayed in the exhibit, vast expanses of sky and landscape evoke various states of mind and provide the context for the artist to consider the architectural impact upon lived spaces and the power relations that it signifies. For the artist, identity, as it is linked to places is shaped by abstract memories and not easily defined representations of territories. The more one tries to be specific, tangibility becomes even more elusive. Born in Ahmedabad, Sarika Mehta completed her Diploma from C.N. College of Fine arts. Her works are gentle aesthetic explorations of emotions and states of being. The series of small format, water-colours focuses on migrations, borders and the porous nature of these borders. Birds are a recurring motif in these works, since nature is unaware of these geopolitical boundaries, which are created by mankind. 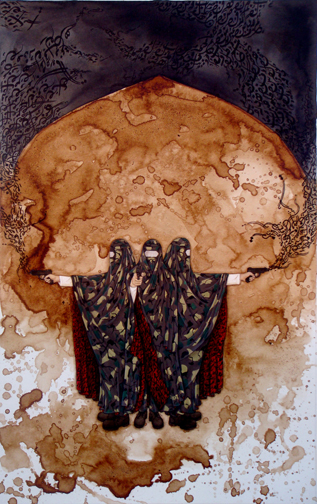 Waseem Ahmed (b. 1976, Hyderabad), in his delicate use of the miniature style explore politically charged issues and identity. The works remain critical of the current, often media generated, caricaturing of the Islamic identity as threatening. Mullahs, gardens and women wearing burka are a few of Waseem Ahmed’s recurrent characters. Adeela Suleman, from Karachi, works with found objects. In this series of work, on porcelain plates, she maps contemporary contexts by charting a pictorial history of heinous acts from the past, to indicate that history reiterates itself. Imran Channa (Lahore) work tests the claims to authenticity made by the photographic image. In the series of works displayed in “The Lay of the Land”, he recreates found photographs in graphite and uses an eraser to peel off the images, revealing the constructed nature of archives and reportage. 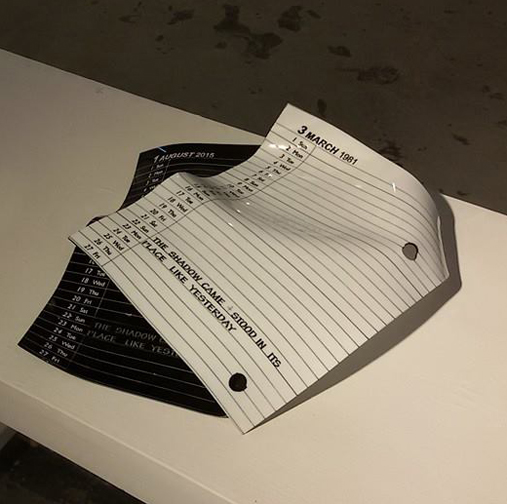 Amna Ilyas, born in Pakistan, contemplates text for its formal elements. It describes how our culture is more accustomed to the tone of text rather than its actual formulation. Her works throw light on the auratic effect that texts can hold, and the various meanings they acquire through the ages; pages from Nasreen Mohamedi’s diary, whose contents she feels have the same relevance as it did 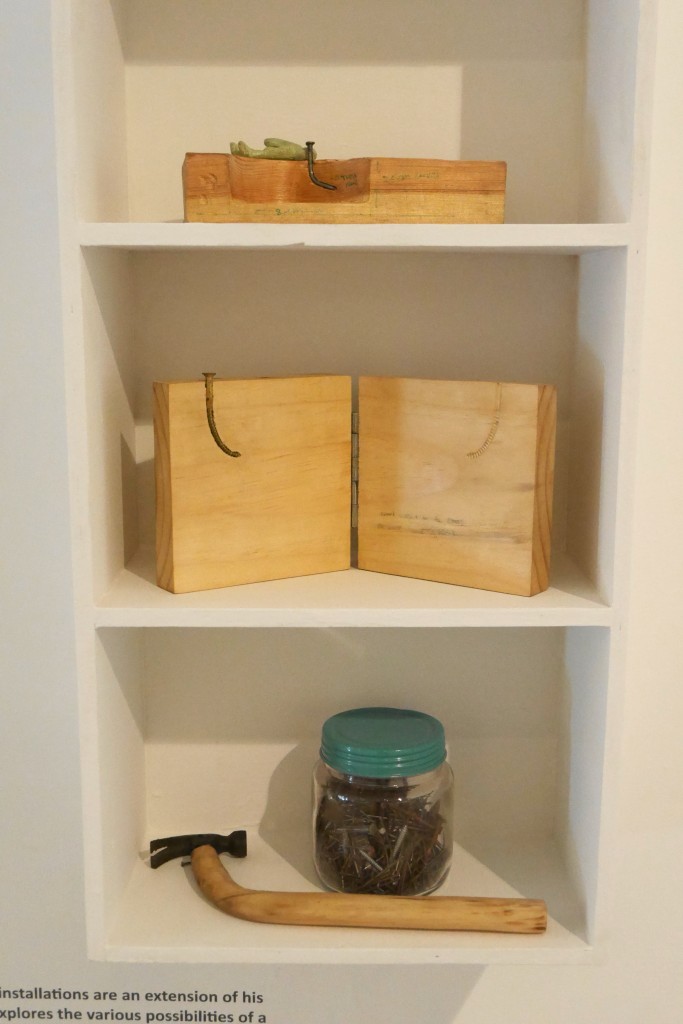 In comparison to her, MSU Baroda pass out, Shailesh BR questions “why an object exists, how it came to be, its dispositional meaning and what it will become during its ‘life’ and after its ‘death’”. The work Nail Went into Cross is one such extraction from a larger process. In this work he traces the journey of the nail within the larger political connotations of the crucifixion. Another artist at the exhibit, who works with built spaces that are invariably either abandoned, neglected or in a state of disuse is, Charmi Gada Shah (Mumbai) recipient of the FICA Emerging Artist Award (2011). The works, as installations, become in-situ repositories of documentation, fiction and mimesis, through a process of revisiting them and building or innovating on their outlines.

Pala Pothupitiye lives and works in Korathota, Colombo, Sri Lanka. The artist uses motifs that recur in his works such as the shirt, fishhooks, and decorative elements from traditional arts to make these imagined maps come alive with Sri Lanka’s history of colonization and ethnic tensions, focusing on the cities of Jaffna and Colombo. 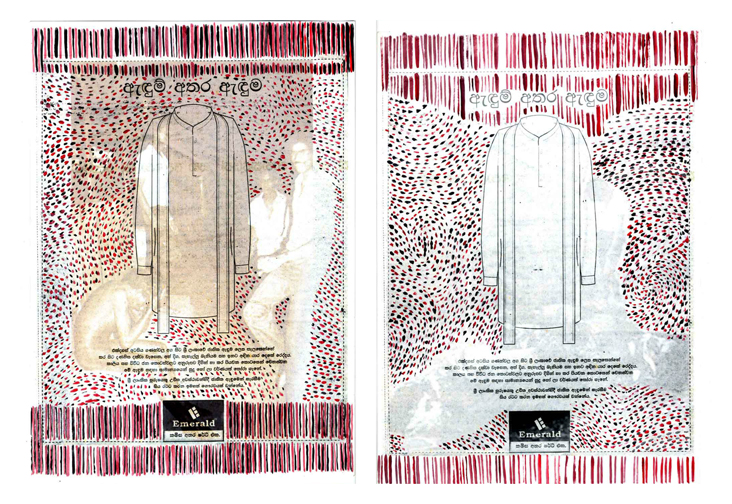 On the other hand, Pradeep Chandrasiri juxtaposes a contemporary advertisement he found in a newspaper on the 4th of February, the Independence Day of Sri Lanka with found, documentary images of the ethnic conflicts that resulted in a civil war that lasted almost three decades. Based out of Goa is another artist, Hyderabad-born Kedar DK studied for his Master’s degree in Fine Arts (Painting). The artist captures the little known, unique history of the Konkani speaking community of Siddhis of African origin, brought to Goa as slaves from the 15th century onwards when it was still under the Portuguese rule. A self- taught artist among the list from Colombo, Thisath Thoradeniya, comes from the historical city of Kandy. He picks up figure of the joker, who occupies the margins of society and has no ostensible relevance except as an entertainer. Yet his comical acts mirror his context, and he carries its weight while treating it with lightness. The joker becomes an appropriate channel for the artist to articulate the anxieties stemming from his own personal experiences.

This mapping of rituals and taboos, gestures and their decoding, text as meaning and its vacuity, memory and its erasure, gender and its collapse, lived histories and televised accounted, identities and their discomfiture, cultural descriptors and their anomalies, religious motifs and their contemporary inversions, this show imagines artist as cartographers capturing vivid, graphic, surveys of these constructs and their collapse from their own vantage points. Hence, to experience such work from the lens of cartography speaks in the larger context of geopolitics.